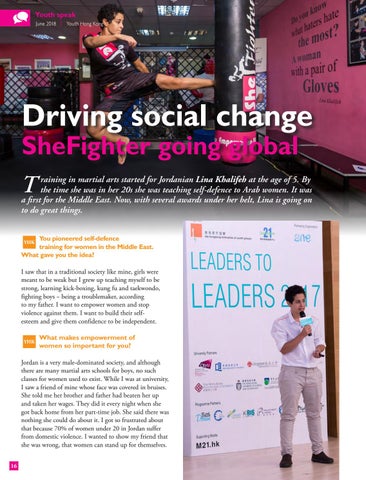 raining in martial arts started for Jordanian Lina Khalifeh at the age of 5. By the time she was in her 20s she was teaching self-defence to Arab women. It was a first for the Middle East. Now, with several awards under her belt, Lina is going on to do great things.

You pioneered self-defence training for women in the Middle East. What gave you the idea? YHK

I saw that in a traditional society like mine, girls were meant to be weak but I grew up teaching myself to be strong, learning kick-boxing, kung fu and taekwondo, fighting boys â&#x2C6;&#x2019; being a troublemaker, according to my father. I want to empower women and stop violence against them. I want to build their selfesteem and give them confidence to be independent. YHK

What makes empowerment of women so important for you?

Jordan is a very male-dominated society, and although there are many martial arts schools for boys, no such classes for women used to exist. While I was at university, I saw a friend of mine whose face was covered in bruises. She told me her brother and father had beaten her up and taken her wages. They did it every night when she got back home from her part-time job. She said there was nothing she could do about it. I got so frustrated about that because 70% of women under 20 in Jordan suffer from domestic violence. I wanted to show my friend that she was wrong, that women can stand up for themselves. 16