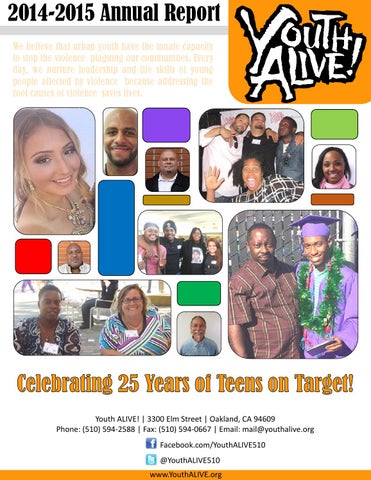 2014-2015 Annual Report We believe that urban youth have the innate capacity to stop the violence plaguing our communities. Every day, we nurture leadership and life skills of young people affected by violence because addressing the root causes of violence saves lives.

Welcome! Dear Friends, What a year of milestones for Youth ALIVE! We celebrated the 25th anniversary of Teens on Target, our violence prevention youth leadership program, at a special evening in Jack London Square, joined by many youth leader alumni (including founding youth leader Michael Munson, who emceed, and Smooth Wickliff, part of whose speech is on the back cover) and even Oakland Mayor Libby Schaaf. Another celebration was bittersweet: the well-earned retirement of Khadafy Washington Project founder, and 2015 Oakland Mother of the Year, Marilyn Washington Harris. This year, Youth ALIVE! made â&amp;#x20AC;&amp;#x153;Healingâ&amp;#x20AC;? a core value: We believe that while hurt people, hurt people, it is also true that healed people, heal people. We are committed to helping our community find hope that renews and restores spiritual, physical, mental and emotional balance. To uphold this value, we doubled the mental health services available to our Caught in the Crossfire youth, and we began using the innovative Screening and Tool for Awareness and Relief of Trauma (START) to help our young people build on their own resilience for coping with community violence. Alongside fellow honorees Gabby Giffords and Mark Kelly, Youth ALIVE! received the 2014 Courageous Honoree award from the Law Center to Prevent Gun Violence. We are proud to be part of a national movement to break the cycle of violence in urban communities by investing in homegrown strategies to prevent, intervene and heal from trauma. You are part of that movement. Thank you for your support, and may we have a peaceful year. With gratitude,

Because of You: Teens on Target

Caught in the Crossfire

Youth who suffered violent injuries were re-enrolled in school

Highlight: Since 1991, Teens on Target has trained over 1,000 youth leaders and made presentations to over 40,000 students, policy makers, and community members on how to prevent and reduce violence!

Our Teens on Target (TNT) violence prevention youth leadership program, trains peer educators who teach workshops about gun, gang, family and domestic violence, provides case management and mental health linkage to support their growth, and engages them in advocacy for policies to reduce violence. This year, Teens on Target celebrated our 25th Anniversary! Please see the back cover for a testimonial from a TNT alumnus

87% Students know they can do something to help prevent and reduce violence in their school or community.

Quotes from our Middle School students

Thank you for teaching us about gun safety. I really liked how you guys taught us not to use a gun for protection and to stay away from somebody who has a gun.

Caught in the Crossfire

Highlight: Since 1994, over 34 programs throughout the U.S. have implemented our model because it works!

Caught in the Crossfire (CIC) is the nation&#39;s first hospital-based violence intervention program. We provide intensive trauma-informed case management and mental health services to young people immediately after theyâ&amp;#x20AC;&amp;#x2122;ve been violently injured and/or released from detention, in order to prevent retaliation, re-injury and arrest.

Caught In the Crossfire (CIC)

98% Youth were not re-hospitalized for a violence-related injury

In October of 2013, Aireana and her boyfriend were driving through Oakland when a man on the street opened fire on their car. Her two children, ages 6 and 1, were in the backseat. Aireana remembers feeling something slam into her jaw and hearing a sound like a firecracker popping in her head. Her boyfriend hit the accelerator and swerved down the street. He and Aireana turned at the same moment to check on the kids. They were safe. Then her boyfriend looked at her and saw blood spurting from her neck. “Oh, my God,” he said, panicking, and crashed into a parked car. A bullet had smashed through her front teeth, grazed her tongue and broken her jaw. When Aireana was lying in Oakland&#39;s Highland Hospital last fall with When Aireana was lying in Oakland&#39;s Highland Hospital last fall with her jaw wired shut, one of her visitors was Rafael Vasquez, an intervention specialist with Youth Alive!, the nonprofit group that founded the nation’s first hospital-based violence intervention program in 1994. Tall and solidly built, Vasquez sometimes has to reassure patients he’s not an undercover cop. His goal is to ensure that victims of violence stay safe after they leave the hospital and that they never come back under similar circumstances. … Over the winter, Youth Alive!’s licensed marriage and family therapist, Nicky MacCallum, visited Aireana at home to conduct therapy with her daughter. Kyndra Simmons, CIC Program Manager &amp; Aireana Allen, … former CIC client at the 2014 CIC Celebration Dinner MacCallum diagnosed Aireana with PTSD. “Nicky helped me,” Aireana says. “She was the first person I actually talked to who believed it was real, that my feelings were real.” MacCallum and other therapists say PTSD is the best diagnosis they can give in these instances—but that it’s not a perfect fit. For clients who live in violent neighborhoods, the trauma that they’re dealing with isn’t really “post.” “People in our community are constantly retraumatized,” MacCallum says.

Update Aireana was adamant about moving forward in her life. With the support of both Rafael and Nicky, Aireana made significant progress in her personal life and recently relocated and enrolled in college.

The Khadafy Washington Project (KWP) provides practical, emotional and financial support after the violent deaths of a loved one, in order to prevent retaliation and promote healing.

Were reached by our KWP Crisis Responders

Legacy Story- Tribute to the KWP Founder Excerpt taken from the May 2015 Oakland Tribune article entitled, “Oakland woman helping families, victims of violence is named Mother of the Year” by Chris De Benedetti.

Marilyn Washington Harris, KWP Founder, is presented with the Oakland Mother of the Year Award from Oakland’s Mayor Libby Schaaf at Oakland&#39;s Mother of the Year ceremony on May 9, 2015. Photo Credit: Dan Honda/Bay Area News Group

Highlight: In 2014, the NNHVIP provided technical assistance to 7 programs, across the country, on our best practices.

Advocacy, training and research – in addition to our direct services – are how Youth ALIVE!’s innovative leadership helps save lives. Through our National Network of Hospital-based Violence Intervention Programs (NNHVIP), for example, we support communities replicating the Caught in the Crossfire model.

TO START A VIOLENCE PREVENTION PROGRAM

Youth ALIVE! worked with Assemblymember Rob Bonta to author AB 1629 in support of ALL Victims of Violent Crimes, which was approved by the Governor on September 25, 2014

Youth ALIVE! piloted The Boys &amp; Men of Color Trauma project, which led to the creening and Tool ool for creation of START: Screening Awareness and Relief of Trauma

START 2 Heal This year, Youth ALIVE! and our community partners began using “START” – the Screening and Tool for Awareness and Relief of Trauma. Youth ALIVE! developed START after two years of research, focus groups, and community interviews with young men of color in Oakland. START helps people in communities that experience violence build their resilience to cope with, and heal from, trauma. So far, 83% of START recipients say that the tool improved their lives, like the young man who said:

“[START] will make me do better in society, will help keep me out of trouble because trouble is all around me. There’s a lot of stuff around you and this will help me be able to get away, to [not] be mixed up in the stuff (fights, etc.) that’s around in the neighborhood.”

Only 3% of young men in Oakland had no trauma symptoms

Trainers from Youth ALIVE! and trainees from the Healing Hurt People Chicago program

Without our funders, donors and supporters, Youth ALIVE! would not be able to have such a great impact. We are grateful for your contribution.

Youth ALIVE! accepts donations by mail or online at www.YouthALIVE.org, where you can make a onetime gift or set up a monthly recurring donation. This just in: Youth ALIVE! is now accepting gifts of stock. Please contact Sue Danne at (510) 594-2588 x301 for more information.

We can do so

“When I first moved to Oakland, I had already heard so many bad things about it that it caused me to be afraid. One of the first things I thought about was protection, so I got a gun and pocket knife. As I reflect, it’s alarming how easy it was for me to get the gun with no questions asked. I wasn’t really into the TNT program at first, but I decided to join for the food and money. At the time, I was having problems at home, so the program became a way of escaping the hurt I often felt while at home. I didn’t have a voice at home, but everyone in the program took an interest in me and wanted to hear what I had to say. My perspective on the program didn’t really change until I did my first presentation at Reach Academy. I presented some facts on gang violence and all the students were hanging on to my every word. They were able to relate to me because my name is Smooth and I looked like them since I was really close to their age. Afterwards, 98% of the students said they thought the presentation helped them and they wanted to tell others about the program. I felt incredible. I finally felt like someone was listening to me, and it motivated me to want to help other kids feel good like it was helping me. It was then that TNT became home and Demetria and Caheri became family to me. It seemed like whenever I was with them that everything else I had going on at home didn’t hurt anymore. TNT was a foundation for me; I owe everything to them. Before TNT, my grades were slipping, I had no direction, or passion. The program pushed me to do more for the community and to set goals for myself. Not only did I graduate at the top of my class, but I was also given the opportunity to speak at my graduation. Even today, I am about to be 20 years old, and I still feel Demetria and Caheri pushing and encouraging me when I feel like giving up. Every time I hear from them, they are always asking how I am doing in school and in life, because they really care. They are still my family. Family will always be there, no matter the distance or the time that goes by. Home is where the heart is, and my heart will always be with TNT.”

We can do so 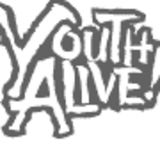