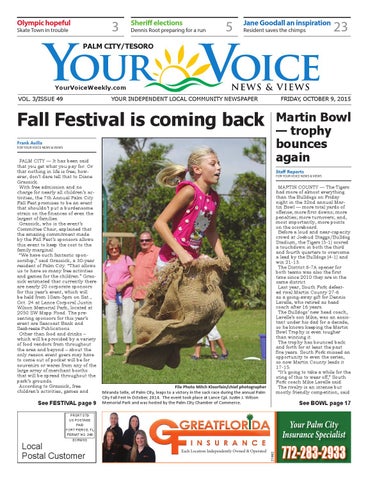 Dennis Root preparing for a run

Fall Festival is coming back

FOR YOUR VOICE NEWS & VIEWS

PALM CITY — It has been said that you get what you pay for. Or that nothing in life is free; however, don’t dare tell that to Diane Grassick. With free admission and no charge for nearly all children’s activities, the 7th Annual Palm City Fall Fest promises to be an event that shouldn’t put a burdensome strain on the finances of even the largest of families. Grassick, who is the event’s Committee Chair, explained that the amazing commitment made by the Fall Fest’s sponsors allows this event to keep the cost to the family marginal. “We have such fantastic sponsorship,” said Grassick, a 30-year resident of Palm City. “That allows us to have so many free activities and games for the children.” Grassick estimated that currently there are nearly 20 corporate sponsors for this year’s event, which will be held from 10am-5pm on Sat., Oct. 24 at Lance Corporal Justin Wilson Memorial Park, located at 2050 SW Mapp Road. The presenting sponsors for this year’s event are Seacoast Bank and Seabreeze Publications. Other than food and drinks – which will be provided by a variety of food vendors from throughout the area and beyond – about the only reason event goers may have to come out of pocket will be for souvenirs or wares from any of the large array of merchant booths that will be spread throughout the park’s grounds. According to Grassick, free children’s activities, games and

FOR YOUR VOICE NEWS & VIEWS

MARTIN COUNTY — The Tigers had more of almost everything than the Bulldogs on Friday night in the 32nd annual Martin Bowl — more total yards of offense; more first downs; more penalties; more turnovers; and, most importantly, more points on the scoreboard. Before a loud and near-capacity crowd at Joebud Staggs/Bulldog Stadium, the Tigers (5-1) scored a touchdown in both the third and fourth quarters to overcome a lead by the Bulldogs (4-1) and win 21-13. The District 6-7A opener for both teams was also the first time since 2010 they are in the same district. Last year, South Fork defeated rival Martin County 27-6 as a going-away gift for Dennis Lavelle, who retired as head coach after 16 years. The Bulldogs’ new head coach, Lavelle’s son Mike, was an assistant under his dad for a decade, so he knows keeping the Martin Bowl Trophy is even tougher than winning it. The trophy has bounced back and forth for at least the past five years. South Fork missed an opportunity to even the series, so now Martin County leads it 17-15. “It’s going to take a while for the sting of this to wear off,” South Fork coach Mike Lavelle said. The rivalry is an intense but mostly friendly competition, said

File Photo Mitch Kloorfain/chief photographer Miranda Selle, of Palm City, leaps to a victory in the sack race during the annual Palm City Fall Fest in October, 2014. The event took place at Lance Cpl. Justin J. Wilson Memorial Park and was hosted by the Palm City Chamber of Commerce. 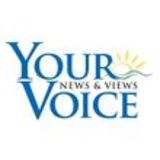