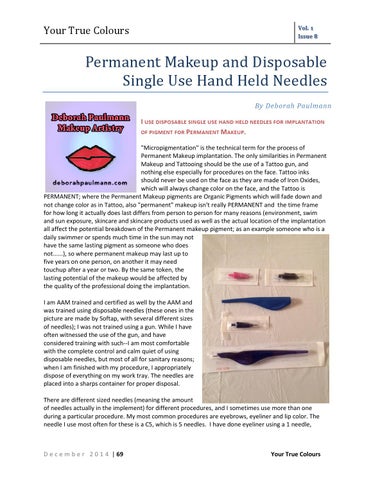 I USE DISPOSABLE SINGLE USE HAND HELD NEEDLES FOR IMPLANTATION OF PIGMENT FOR PERMANENT MAKEUP.

&quot;Micropigmentation&quot; is the technical term for the process of Permanent Makeup implantation. The only similarities in Permanent Makeup and Tattooing should be the use of a Tattoo gun, and nothing else especially for procedures on the face. Tattoo inks should never be used on the face as they are made of Iron Oxides, which will always change color on the face, and the Tattoo is PERMANENT; where the Permanent Makeup pigments are Organic Pigments which will fade down and not change color as in Tattoo, also &quot;permanent&quot; makeup isn&#39;t really PERMANENT and the time frame for how long it actually does last differs from person to person for many reasons (environment, swim and sun exposure, skincare and skincare products used as well as the actual location of the implantation all affect the potential breakdown of the Permanent makeup pigment; as an example someone who is a daily swimmer or spends much time in the sun may not have the same lasting pigment as someone who does not......), so where permanent makeup may last up to five years on one person, on another it may need touchup after a year or two. By the same token, the lasting potential of the makeup would be affected by the quality of the professional doing the implantation. I am AAM trained and certified as well by the AAM and was trained using disposable needles (these ones in the picture are made by Softap, with several different sizes of needles); I was not trained using a gun. While I have often witnessed the use of the gun, and have considered training with such--I am most comfortable with the complete control and calm quiet of using disposable needles, but most of all for sanitary reasons; when I am finished with my procedure, I appropriately dispose of everything on my work tray. The needles are placed into a sharps container for proper disposal. There are different sized needles (meaning the amount of needles actually in the implement) for different procedures, and I sometimes use more than one during a particular procedure. My most common procedures are eyebrows, eyeliner and lip color. The needle I use most often for these is a C5, which is 5 needles. I have done eyeliner using a 1 needle,