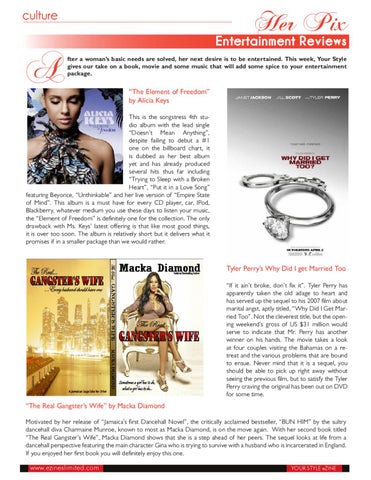 Entertainment Reviews fter a woman’s basic needs are solved, her next desire is to be entertained. This week, Your Style gives our take on a book, movie and some music that will add some spice to your entertainment package.

“The Element of Freedom” by Alicia Keys

This is the songstress 4th studio album with the lead single “Doesn’t Mean Anything”, despite failing to debut a #1 one on the billboard chart, it is dubbed as her best album yet and has already produced several hits thus far including “Trying to Sleep with a Broken Heart”, “Put it in a Love Song” featuring Beyonce, “Unthinkable” and her live version of “Empire State of Mind”. This album is a must have for every CD player, car, IPod, Blackberry, whatever medium you use these days to listen your music, the “Element of Freedom” is definitely one for the collection. The only drawback with Ms. Keys’ latest offering is that like most good things, it is over too soon. The album is relatively short but it delivers what it promises if in a smaller package than we would rather.

Tyler Perry’s Why Did I get Married Too “If it ain’t broke, don’t fix it”. Tyler Perry has apparently taken the old adage to heart and has served up the sequel to his 2007 film about marital angst, aptly titled, “Why Did I Get Married Too”. Not the cleverest title, but the opening weekend’s gross of US $31 million would serve to indicate that Mr. Perry has another winner on his hands. The movie takes a look at four couples visiting the Bahamas on a retreat and the various problems that are bound to ensue. Never mind that it is a sequel, you should be able to pick up right away without seeing the previous film, but to satisfy the Tyler Perry craving the original has been out on DVD for some time.

“The Real Gangster’s Wife” by Macka Diamond Motivated by her release of “Jamaica’s first Dancehall Novel”, the critically acclaimed bestseller, “BUN HIM” by the sultry dancehall diva Charmaine Munroe, known to most as Macka Diamond, is on the move again. With her second book titled “The Real Gangster’s Wife”, Macka Diamond shows that she is a step ahead of her peers. The sequel looks at life from a dancehall perspective featuring the main character Gina who is trying to survive with a husband who is incarcerated in England. If you enjoyed her first book you will definitely enjoy this one.