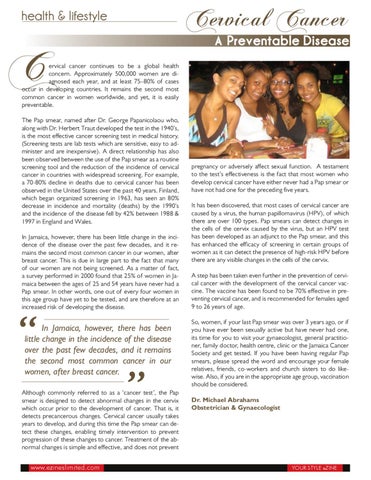 ervical cancer continues to be a global health concern. Approximately 500,000 women are diagnosed each year, and at least 75–80% of cases occur in developing countries. It remains the second most common cancer in women worldwide, and yet, it is easily preventable. The Pap smear, named after Dr. George Papanicolaou who, along with Dr. Herbert Traut developed the test in the 1940’s, is the most effective cancer screening test in medical history. (Screening tests are lab tests which are sensitive, easy to administer and are inexpensive). A direct relationship has also been observed between the use of the Pap smear as a routine screening tool and the reduction of the incidence of cervical cancer in countries with widespread screening. For example, a 70-80% decline in deaths due to cervical cancer has been observed in the United States over the past 40 years. Finland, which began organized screening in 1963, has seen an 80% decrease in incidence and mortality (deaths) by the 1990’s and the incidence of the disease fell by 42% between 1988 & 1997 in England and Wales. In Jamaica, however, there has been little change in the incidence of the disease over the past few decades, and it remains the second most common cancer in our women, after breast cancer. This is due in large part to the fact that many of our women are not being screened. As a matter of fact, a survey performed in 2000 found that 25% of women in Jamaica between the ages of 25 and 54 years have never had a Pap smear. In other words, one out of every four women in this age group have yet to be tested, and are therefore at an increased risk of developing the disease.

In Jamaica, however, there has been little change in the incidence of the disease over the past few decades, and it remains the second most common cancer in our women, after breast cancer.

Although commonly referred to as a ‘cancer test’, the Pap smear is designed to detect abnormal changes in the cervix which occur prior to the development of cancer. That is, it detects precancerous changes. Cervical cancer usually takes years to develop, and during this time the Pap smear can detect these changes, enabling timely intervention to prevent progression of these changes to cancer. Treatment of the abnormal changes is simple and effective, and does not prevent

pregnancy or adversely affect sexual function. A testament to the test’s effectiveness is the fact that most women who develop cervical cancer have either never had a Pap smear or have not had one for the preceding five years. It has been discovered, that most cases of cervical cancer are caused by a virus, the human papillomavirus (HPV), of which there are over 100 types. Pap smears can detect changes in the cells of the cervix caused by the virus, but an HPV test has been developed as an adjunct to the Pap smear, and this has enhanced the efficacy of screening in certain groups of women as it can detect the presence of high-risk HPV before there are any visible changes in the cells of the cervix. A step has been taken even further in the prevention of cervical cancer with the development of the cervical cancer vaccine. The vaccine has been found to be 70% effective in preventing cervical cancer, and is recommended for females aged 9 to 26 years of age. So, women, if your last Pap smear was over 3 years ago, or if you have ever been sexually active but have never had one, its time for you to visit your gynaecologist, general practitioner, family doctor, health centre, clinic or the Jamaica Cancer Society and get tested. If you have been having regular Pap smears, please spread the word and encourage your female relatives, friends, co-workers and church sisters to do likewise. Also, if you are in the appropriate age group, vaccination should be considered. Dr. Michael Abrahams Obstetrician & Gynaecologist