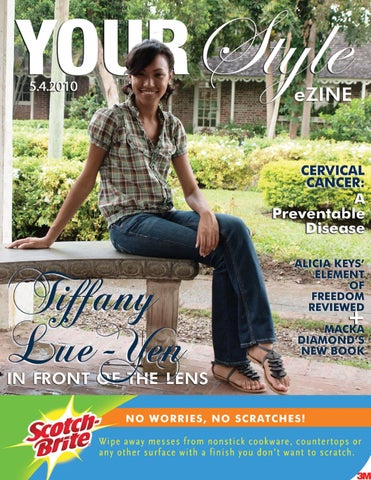 The long weekend is all but over and we hope it was a fantastic one. Now that the bun and cheese binge has subsided and those bodies have been refueled,its time for your weekly offering of style. This week Your Style features a young photographer Tiffany Lue-Yen and in accordance with the Jamaican Cancer Society which is celebrating Cancer Awareness month, we take a look at Cervical cancer. Have a good Easter Monday.

ervical cancer continues to be a global health concern. Approximately 500,000 women are diagnosed each year, and at least 75–80% of cases occur in developing countries. It remains the second most common cancer in women worldwide, and yet, it is easily preventable. The Pap smear, named after Dr. George Papanicolaou who, along with Dr. Herbert Traut developed the test in the 1940’s, is the most effective cancer screening test in medical history. (Screening tests are lab tests which are sensitive, easy to administer and are inexpensive). A direct relationship has also been observed between the use of the Pap smear as a routine screening tool and the reduction of the incidence of cervical cancer in countries with widespread screening. For example, a 70-80% decline in deaths due to cervical cancer has been observed in the United States over the past 40 years. Finland, which began organized screening in 1963, has seen an 80% decrease in incidence and mortality (deaths) by the 1990’s and the incidence of the disease fell by 42% between 1988 &amp; 1997 in England and Wales. In Jamaica, however, there has been little change in the incidence of the disease over the past few decades, and it remains the second most common cancer in our women, after breast cancer. This is due in large part to the fact that many of our women are not being screened. As a matter of fact, a survey performed in 2000 found that 25% of women in Jamaica between the ages of 25 and 54 years have never had a Pap smear. In other words, one out of every four women in this age group have yet to be tested, and are therefore at an increased risk of developing the disease.

In Jamaica, however, there has been little change in the incidence of the disease over the past few decades, and it remains the second most common cancer in our women, after breast cancer.

Although commonly referred to as a ‘cancer test’, the Pap smear is designed to detect abnormal changes in the cervix which occur prior to the development of cancer. That is, it detects precancerous changes. Cervical cancer usually takes years to develop, and during this time the Pap smear can detect these changes, enabling timely intervention to prevent progression of these changes to cancer. Treatment of the abnormal changes is simple and effective, and does not prevent

pregnancy or adversely affect sexual function. A testament to the test’s effectiveness is the fact that most women who develop cervical cancer have either never had a Pap smear or have not had one for the preceding five years. It has been discovered, that most cases of cervical cancer are caused by a virus, the human papillomavirus (HPV), of which there are over 100 types. Pap smears can detect changes in the cells of the cervix caused by the virus, but an HPV test has been developed as an adjunct to the Pap smear, and this has enhanced the efficacy of screening in certain groups of women as it can detect the presence of high-risk HPV before there are any visible changes in the cells of the cervix. A step has been taken even further in the prevention of cervical cancer with the development of the cervical cancer vaccine. The vaccine has been found to be 70% effective in preventing cervical cancer, and is recommended for females aged 9 to 26 years of age. So, women, if your last Pap smear was over 3 years ago, or if you have ever been sexually active but have never had one, its time for you to visit your gynaecologist, general practitioner, family doctor, health centre, clinic or the Jamaica Cancer Society and get tested. If you have been having regular Pap smears, please spread the word and encourage your female relatives, friends, co-workers and church sisters to do likewise. Also, if you are in the appropriate age group, vaccination should be considered. Dr. Michael Abrahams Obstetrician &amp; Gynaecologist

Tiffany Lue-Yen In Front of The Lens

t age 24, while most are still trying to figure out their purpose in life, Tiffany Lue-Yen is already a seasoned professional photographer. After picking up her first disposable camera at age 10, there was little doubt left in her mind that she was destined to become a photographer. This tenacious and petite young lady considers herself blessed to have found her passion in a lucrative and exciting industry where she is constantly meeting different people, such as models and celebrities. There is no coincidence why “the little girl with big camera” prefers to shoot weddings. “I started taking picture professionally in 2005 at a wedding that my aunt had coordinated”, stated the graduate of the Art Institute of Fort Lauderdale, “I love doing weddings, being there for a couple’s special moment and capturing it, especially when they call me back saying that the photos were wonderful, it just means so much more to me”. Unfazed by the competiveness of the industry, Tiffany manages to make her work stands out. “Jamaica is pretty small

and we have a lot of good photographers so I try to do the best that I can do with clean work and good quality, get good equipment and always trying to improve on my work”, says Lue-Yen. Admiring the works of photographers such as David Lechapelle, Mario Testino and Anni Leibovitz, Tiffany admits there is still a far way to go with her craft but nonetheless she is satisfied with her results thus far. “These guys photograph all the celebrities, their sets are creative and very elaborate, their quality is amazing and they work with interesting people”, says the talented photographer.

I believe in jumping on every opportunity you can get, never waste them, there is always opportunities within opportunity to excel in whatever it is that you do.

Tiffany Lue-Yen In Front of The Lens

Never mind that her career hasn’t taken her to any exotic location presently, she is still focused seeing that her career is in its blooming stage. Lue-Yen is not selling herself short as she is currently focused on going back into school in the field of Cinematography specific for motion picture and television. “I believe in jumping on every opportunity you can get, never waste them, there is always opportunities within opportunity to excel in whatever it is that you do” says Ms. Lue-Yen who is presently working on a shoot for the second season of College TV series.

WHEN it’s okay to move on I am a perfectionist at heart so once the job is completed to the best of my abilities, if I am satisfied, then I know that my clients will be satisfied. Satisfaction is key. WHERE will you find her after a brutal day Lying down chilling at home watching TV, TLC of course and sometimes MTV or singing Karaoke. WHY she’s a true Sagittarius [She believes that no job is ever too small]: Always jump on an opportunity and any experience is worth it whether its family or friends. HOW she stays focused and grounded I am naturally a humble a person and I don’t have a big ego.

WHO do you consider your role model My father, he is very hard working man and I think that’s where I get my work ethic from. Watching him over the years working seven days a week and dabbling in all different markets has truly motivated me. WHAT drives you towards excellence Wanting to be successful and making my parents, family and my friends proud and wanting to have a good lifestyle. You have to work hard if you want to achieve it.

Entertainment Reviews fter a woman’s basic needs are solved, her next desire is to be entertained. This week, Your Style gives our take on a book, movie and some music that will add some spice to your entertainment package.

“The Element of Freedom” by Alicia Keys

This is the songstress 4th studio album with the lead single “Doesn’t Mean Anything”, despite failing to debut a #1 one on the billboard chart, it is dubbed as her best album yet and has already produced several hits thus far including “Trying to Sleep with a Broken Heart”, “Put it in a Love Song” featuring Beyonce, “Unthinkable” and her live version of “Empire State of Mind”. This album is a must have for every CD player, car, IPod, Blackberry, whatever medium you use these days to listen your music, the “Element of Freedom” is definitely one for the collection. The only drawback with Ms. Keys’ latest offering is that like most good things, it is over too soon. The album is relatively short but it delivers what it promises if in a smaller package than we would rather.

Tyler Perry’s Why Did I get Married Too “If it ain’t broke, don’t fix it”. Tyler Perry has apparently taken the old adage to heart and has served up the sequel to his 2007 film about marital angst, aptly titled, “Why Did I Get Married Too”. Not the cleverest title, but the opening weekend’s gross of US $31 million would serve to indicate that Mr. Perry has another winner on his hands. The movie takes a look at four couples visiting the Bahamas on a retreat and the various problems that are bound to ensue. Never mind that it is a sequel, you should be able to pick up right away without seeing the previous film, but to satisfy the Tyler Perry craving the original has been out on DVD for some time.

“The Real Gangster’s Wife” by Macka Diamond Motivated by her release of “Jamaica’s first Dancehall Novel”, the critically acclaimed bestseller, “BUN HIM” by the sultry dancehall diva Charmaine Munroe, known to most as Macka Diamond, is on the move again. With her second book titled “The Real Gangster’s Wife”, Macka Diamond shows that she is a step ahead of her peers. The sequel looks at life from a dancehall perspective featuring the main character Gina who is trying to survive with a husband who is incarcerated in England. If you enjoyed her first book you will definitely enjoy this one.