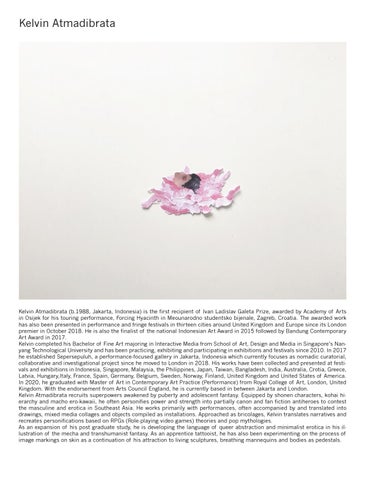 Kelvin Atmadibrata (b.1988, Jakarta, Indonesia) is the first recipient of Ivan Ladislav Galeta Prize, awarded by Academy of Arts in Osijek for his touring performance, Forcing Hyacinth in Meounarodno studentsko bijenale, Zagreb, Croatia. The awarded work has also been presented in performance and fringe festivals in thirteen cities around United Kingdom and Europe since its London premier in October 2018. He is also the finalist of the national Indonesian Art Award in 2015 followed by Bandung Contemporary Art Award in 2017. Kelvin completed his Bachelor of Fine Art majoring in Interactive Media from School of Art, Design and Media in Singaporeâ&amp;#x20AC;&amp;#x2122;s Nanyang Technological University and has been practicing, exhibiting and participating in exhibitions and festivals since 2010. In 2017 he established Sepersepuluh, a performance-focused gallery in Jakarta, Indonesia which currently focuses as nomadic curatorial, collaborative and investigational project since he moved to London in 2018. His works have been collected and presented at festivals and exhibitions in Indonesia, Singapore, Malaysia, the Philippines, Japan, Taiwan, Bangladesh, India, Australia, Crotia, Greece, Latvia, Hungary,Italy, France, Spain, Germany, Belgium, Sweden, Norway, Finland, United Kingdom and United States of America. In 2020, he graduated with Master of Art in Contemporary Art Practice (Performance) from Royal College of Art, London, United Kingdom. With the endorsement from Arts Council England, he is currently based in between Jakarta and London. Kelvin Atmadibrata recruits superpowers awakened by puberty and adolescent fantasy. Equipped by shonen characters, kohai hierarchy and macho ero-kawaii, he often personifies power and strength into partially canon and fan fiction antiheroes to contest the masculine and erotica in Southeast Asia. He works primarily with performances, often accompanied by and translated into drawings, mixed media collages and objects compiled as installations. Approached as bricolages, Kelvin translates narratives and recreates personifications based on RPGs (Role-playing video games) theories and pop mythologies. As an expansion of his post graduate study, he is developing the language of queer abstraction and minimalist erotica in his illustration of the mecha and transhumanist fantasy. As an apprentice tattooist, he has also been experimenting on the process of image markings on skin as a continuation of his attraction to living sculptures, breathing mannequins and bodies as pedestals. 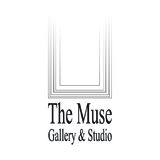