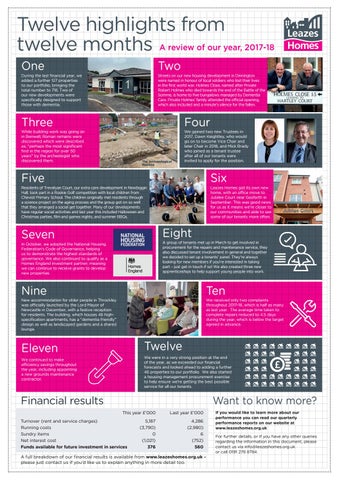 Twelve highlights from twelve months A review of our year, 2017-18 One

During the last financial year, we added a further 127 properties to our portfolio, bringing the total number to 718. Two of our new developments were specifically designed to support those with dementia.

Streets on our new housing development in Dinnington were named in honour of local soldiers who lost their lives in the first world war. Holmes Close, named after Private Robert Holmes who died towards the end of the Battle of the Somme, is home to five bungalows managed by Dementia Care. Private Holmes’ family attended the official opening, which also included and a minute’s silence for the fallen.

While building work was going on in Benwell, Roman remains were discovered which were described as; “perhaps the most significant find in the region for over 50 years” by the archeologist who discovered them.

We gained two new Trustees in 2017, Dawn Keightley, who would go on to become Vice Chair and later Chair in 2018, and Mick Brady who joined as a tenant trustee after all of our tenants were invited to apply for the position.

Residents of Trevelyan Court, our extra care development in Newbiggin Hall, took part in a Rookie Golf competition with local children from Cheviot Primary School. The children originally met residents through a science project on the aging process and the group got on so well that they arranged a social get together. Many of our developments have regular social activities and last year this included Halloween and Christmas parties, film and games nights, and summer BBQs.

Leazes Homes got its own new home, with an office move to Jubilee Court near Gosforth in September. This was good news for us as it means we’re closer to our communities and able to see some of our tenants more often.

A group of tenants met up in March to get involved in procurement for the repairs and maintenance service, they also discussed tenant involvement in general and together we decided to set up a tenants’ panel. They’re always looking for new members if you’re interested in taking part – just get in touch if so! We also created three new apprenticeships to help support young people into work.

In October, we adopted the National Housing Federation’s Code of Governance, helping us to demonstrate the highest standards of governance. We also continued to qualify as a Homes England investment partner, meaning we can continue to receive grants to develop new properties

New accommodation for older people in Throckley was officially launched by the Lord Mayor of Newcastle in December, with a festive reception for residents. The building, which houses 46 highspecification apartments, has a “dementia friendly” design as well as landscaped gardens and a shared lounge.

We received only two complaints throughout 2017-18, which is half as many as last year. The average time taken to complete repairs reduced to 4.5 days during the year, which is below the target agreed in advance.

We continued to make efficiency savings throughout the year, including appointing a new grounds maintenance contractor.

We were in a very strong position at the end of the year, as we exceeded our financial forecasts and looked ahead to adding a further 46 properties to our portfolio. We also started a housing management procurement exercise to help ensure we’re getting the best possible service for all our tenants.

A full breakdown of our financial results is available from www.leazeshomes.org.uk – please just contact us if you’d like us to explain anything in more detail too.

If you would like to learn more about our performance you can read our quarterly performance reports on our website at www.leazeshomes.org.uk For further details, or if you have any other queries regarding the information in this document, please contact us via info@leazeshomes.org.uk or call 0191 278 8784. 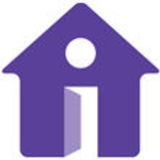