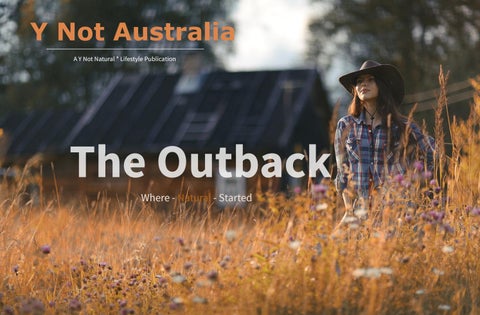 Y Not Australia A Y Not Natural * Lifestyle Publication

The Outback Where - Natural - Started

Australia&#39;s Outback is a land of deep knowledge

From the healing aroma of Eucalyptus trees - to the wet earth when it rains - to sweeping landscapes, this is where the worlds most ancient culture lives. The indiginous Aboriginal elders. The Aboringal people have a continuous history spanning more than 50,000 years and represent the oldest story on earth.

They provide us an irrevocabl understanding of our land, spirituality and wonder. Aboriginal law covers a body of knowledge that cannot be changed - because they did not make the laws - their laws were made by spiritual ancestors in the Dreamtime.

The Australian Bush Is Our Medicine Cabinent

The Aboriginal people maintain and record their culture with Dreamtime stories with mosaics of multi colored dots and circles that depict man&#39;s beginnings of life in Australia. Their art is timeless.

The Australian landscape has become one of the iconic images of Australian folklore. Since the 1800s women have been joining their partners to live in the Outback to run sheep, cattle or wheat stations. Many had no idea of the diďŹ&amp;#x20AC;iculties and dangers which lay ahead, but they had extraordinary grit and determination.

Emu Oil was the prized health solution for settlers

After arriving, the settlers soon learned about the Emu Bird Oil from the Aboriginal elders. It became one of their most important staples and no ranch or station was without it. In the Outback, the Emu oil was the skin care of choice as it has high levels of Vitamin E, Oleic acid and sapogens, which are proven skin cell regenerators, skin softeners and anti-wrinkle agents. A study on the biological activity of Emu oil found that the lipids in the oil mimic those of the human skin, providing an efďŹ cient trans-dermal delivery system that can deeply penetrate the skin&#39;s surface. In fact, the oil can penetrate skin so deeply that its active compounds can have an effect on the entire body.

The Emu, as a species, dates back approximately 40 million years to the saurian age and has provided ingredients to the indiginous culture for their health for centuries. The Emu provides an oil that is NOT a real oil, but a complex SYNERGY of vitamins, minerals and essential fatty acids including Omega 3 and 6. And, as the Emu Oil is assembled by the wisdom of nature, we look to keep it that way - as pure as possible. Our Y-Not Family has worked with the Emus for more than 35 years and we still render the Emu fat in the ancient traditional way learned from the Aboriginal Elders.

Emu farming was pioneered in Western Australia, and although there are Emu&#39;s being raised in different areas of the world - mostly as Zoo animals, it is Australia that has the original DNA of the gene pool that is coveted for health and skin care.

To try Emu Oil for your health, we giďż˝ you a special price to get started

Y Not Natural would like to introduce you to Emu Oil for your diet. We are the only manufacturer that provides Emu Oil capsules that are all natural and 100% pure. Receive a 30 day supply of Omega 369 for 20% oďŹ&amp;#x20AC;. Use Code: FTRISWXC

YNotNaturals.com.au Internal Health Benefits of Emu Oil What makes emu oil so special when it&#39;s taken internally is the ability to soothe inflammation within the body. According to studies, the oil helps to heal acute inflammation of the intestines. Today we know the reason is because Emu Oil is rich in Omega 3, 6 and 9 essential fatty acids that has a unique synergistic blend. These Omega fatty acids are not produced by the human body. We also now know that taking the oil internally lowers cholesterol levels, reduces inflammation of arthritic conditions, and inflammation associated with digestive disorders. You can see why this special bird has been so revered within Australia for thousands of years.

Try our Emu Oil with Fragonia Essential Oil. We gift you a special price to get started.

Y Not Australia would like to introduce you to Emu Oil with Fragonia Essential Oil. Our oil is 100% organic and 100% pure.

Our Emu Oil products are wonderful moisturizers which smooth and condition rough elbows, knees and heels; softens and moisturizes hands and cuticles; reduces itching and ﬂakiness associated with dry skin; and protects the face and hands from wind and weather. Best of all, Emu Oil contains powerful antioxidants, as well as a known skin cell regenerator and anti-wrinkle agent, helping to improve the condition of aging skin.

Emu Oil with Fragonia Essentail Oil Fragonia is a wonderful medicinal bush that is only found in Western Australia. Fragonia has a delightful aroma with antibacterial and anti fungal properties that are known to be effective in stopping a cold in its tracks! Fragonia has very good expectorant properties and is used as a treatment for colds, ﬂu, and other head and chest infections. Fragonia also inhibits inﬂamation and pain, which when mixed with Emu Oil, becomes very theraputic, as Emu Oil has the same powerful effect.

Competing at the very highest level in any sports endeavor is not as easy as most would think. Over the past 4 years as a successful middle distance athlete, I have been on an incredible journey of growth and self-development. In 2006, after being ranked as one of the top 3 indoor competitors in the country, I contracted mumps, which forced me out of the Nationals and other major championships that year. In 2008 after ďŹ ghting back from a stress fracture, I was diagnosed with the Chronic Fatigue Illness ME and was forced to withdraw from the 2009 season completely. Since then I have recovered and overcome the obstacles that would of kept most others down. Physically I&#39;ve worked hard to move forward and reach my full potential. I&#39;m now back racing and looking to transcend my previous track accolades in the indoor championships!

My plan is take part in the Rio Olympics 2016, but not just to enter - I am after a medal. There are plenty of other major championships I aim to succeed in along the journey, but each of those will be a step to achieve that ultimate dream to win an Olympic medal. Having tasted success in previous years, and knowing what it is like to feel the disappointment of my illness, I only have one thing on my mind: &quot;Being the Very Best, No Excuses.&quot;

Nearing the peak of my physical age and having overcome some of the toughest circumstances in my health, I am ready to give this everything to achieve my ultimate goal. The Y Not Emu Oil - sports products are the best I&#39;ve found for my joints, inďŹ&amp;#x201A;amation and recovery for physical stress. Every athlete should take a look at using these products, including the 369 Omega tablets, which go far beyond the normal, over-the-counter products, which do not have the same potency. Follow Ellie at: twitter.com/runellie1 elliestevens.com

Y Not Naturals Omega 369 Sport products with Vitamin E are high potency blends of emu oil and premium therapeutic essential oils that provide temporary relief of muscular aches, pains, spasms and sciatic pain. Y-Not Natural OMEGA 369 Sports Oil Rub contains wintergreen oil, a natural aspirin like compound, which, because it is applied externally is less likely to cause the stomach irritation associated with oral anti-inﬂammatories. Research shows that wintergreen is tissue speciﬁc; its main compound methyl salicylate “prefers” tissues compared to blood, with levels up to 30 times higher in muscle tissue than blood levels. This means that the active compound works where it is applied rather than being quickly removed by the blood supply. Y-Not Natural OMEGA 369 Sports Oil Rub also contains Emu oil, which has potent anti-inﬂammatory action. The eucalyptus and peppermint oils in Y-Not Natural OMEGA 369 Sports Oil Rub both increase micro-circulation and a feeling of warmth.

Y Not Australia is an organic health and skincare product company from Perth, Australia. In this issue we are sharing the wisdom from the Outback. 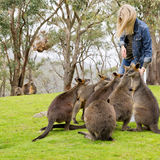