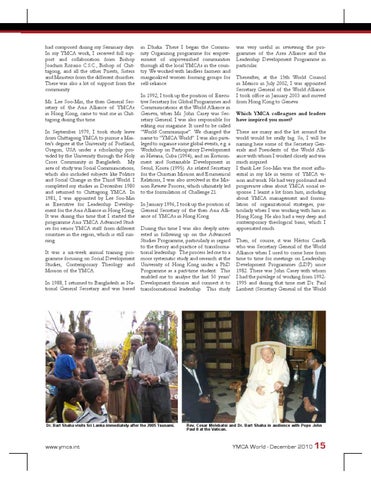 had composed during my Seminary days. In my YMCA work, I received full support and collaboration from Bishop Joachim Rozario C.S.C., Bishop of Chittagong, and all the other Priests, Sisters and Ministers from the different churches. There was also a lot of support from the community. Mr. Lee Soo-Min, the then General Secretary of the Asia Alliance of YMCAs in Hong Kong, came to visit me in Chittagong during this time. In September 1979, I took study leave from Chittagong YMCA to pursue a Master’s degree at the University of Portland, Oregon, USA under a scholarship provided by the University through the Holy Cross Community in Bangladesh. My area of study was Social Communications, which also included subjects like Politics and Social Change in the Third World. I completed my studies in December 1980 and returned to Chittagong YMCA. In 1981, I was appointed by Lee Soo-Min as Executive for Leadership Development for the Asia Alliance in Hong Kong. It was during this time that I started the programme Asia YMCA Advanced Studies for senior YMCA staff from different countries in the region, which is still running. It was a six-week annual training programme focusing on Social Development Studies, Contemporary Theology and Mission of the YMCA. In 1988, I returned to Bangladesh as National General Secretary and was based

in Dhaka. There I began the Community Organizing programme for empowerment of impoverished communities through all the local YMCAs in the country. We worked with landless farmers and marginalized women forming groups for self-reliance. In 1992, I took up the position of Executive Secretary for Global Programmes and Communications at the World Alliance in Geneva, when Mr. John Casey was Secretary General. I was also responsible for editing our magazine. It used to be called “World Communique”. We changed the name to “YMCA World”. I was also privileged to organise some global events, e.g. a Workshop on Participatory Development in Havana, Cuba (1994), and on Environment and Sustainable Development in Seoul, Korea (1995). As related Secretary for the Christian Mission and Ecumenical Relations, I was also involved in the Mission Review Process, which ultimately led to the formulation of Challenge 21. In January 1996, I took up the position of General Secretary of the then Asia Alliance of YMCAs in Hong Kong. During this time I was also deeply interested in following up on the Advanced Studies Programme, particularly in regard to the theory and practice of transformational leadership. The process led me to a more systematic study and research at the University of Hong Kong under a PhD Programme as a part-time student. This enabled me to analyse the last 50 years’ Development theories and connect it to transformational leadership. This study

was very useful in reviewing the programmes of the Area Alliance and the Leadership Development Programme in particular. Thereafter, at the 15th World Council in Mexico in July 2002, I was appointed Secretary General of the World Alliance. I took office in January 2003 and moved from Hong Kong to Geneva. Which YMCA colleagues and leaders have inspired you most? There are many and the list around the world would be really big. So, I will be naming here some of the Secretary Generals and Presidents of the World Alliance with whom I worked closely and was much inspired. I think Lee Soo-Min was the most influential in my life in terms of YMCA vision and work. He had very profound and progressive ideas about YMCA social response. I learnt a lot from him, including about YMCA management and formulation of organizational strategies, particularly when I was working with him in Hong Kong. He also had a very deep and contemporary theological basis, which I appreciated much. Then, of course, it was Héctor Caselli who was Secretary General of the World Alliance when I used to come here from time to time for meetings on Leadership Development Programmes (LDP) since 1982. There was John Casey with whom I had the privilege of working from 19921995 and during that time met Dr. Paul Limbert (Secretary General of the World