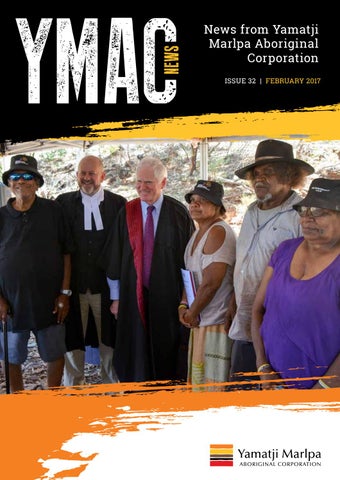 Recognition for the Robe River Kuruma

A gathering of languages

new year to all our members. In this edition, you can read about the celebration of native title determinations for the Robe River Kuruma

There has been some changes to the Pilbara and Yamatji Regional Committees, and we would like to congratulate the new members, and thank Doris Eaton and Ben

Roberts for their time as Co-Chairs of YMAC, and Victor Mourambine for his role as Deputy Co-Chair. Doris Eaton will continue on as the Co-Chair for the Pilbara Regional Committee and as the Deputy Co-Chair of YMAC. Both

Warning: Aboriginal People are warned that this publication may contain images of deceased people.

people celebrated the legal recognition of their

land and culture at an on-Country Federal Court hearing, held at Mindoona on the Robe River. Federal Court judge Justice Michael Barker made the consent determination which recognised the Robe River Kuruma people’s claim, known as Kuruma Marthudunera Part A. The Part A native title determination application was filed in 1998 and covers approximately 4109 km of land located in the Shire of Ashburton and Roebourne.

Sara Slattery, Robe River Kuruma Traditional Owner, said the celebration was a long 20 year journey. “We still have more work to do to achieve our Part B determination, today we celebrated the recognition of our Country and culture,” she said. Simon Hawkins, CEO, Yamatji Marlpa Aboriginal Corporation said it’s reassuring to see the success of the Robe River Kuruma people’s native title determination.

The Part A area - often called Silvergrass, is home to many sacred sites, ceremonial places and permanent pools along the Jajiwara (Robe River). The area and its surrounds is a unique and

“This determination took an extra 18 months of negotiation, the result from this saw the group securing five significant sites as exclusive possession areas,” he said.

culturally important landscape which is part of the

helped translate the welcome song into “We are

camp at Gunnado Farm in November 2016. The

Australian” and sang it out with everyone.

two-day camp had over 50 people attended both day and evening sessions. People

the songs with his music. Language speakers

Mount Magnet and Geraldton to take part in the

and others also participated in art sessions with

activities. The camp was a get-together to talk

about language and to look at what’s happening with Wajarri, Badimaya, Malgana, Warriyanga, Yinggarda and Ngarlawangga languages. Language groups worked together to translate a welcome song in each of their languages. Yamatji Regional Committee member Ben Roberts and the Wajarri group welcomed participants, along

The language camp was recorded by ABC Radio, and was broadcast throughout the Mid West and Wheatbelt. The recordings also aired on Radio National shortly after the camp ended. Congratulations

YMAC was proud to sponsor this event.

ABOVE: Participants at the Bundiyarra Bush Camp

Language Centre on such a successful event!

people’s native title determination has been a long

the remainder of their rights to Country which was denied at the August 2000 Nharnuwangga Determination. Federal Court judge Justice Michael Barker made the consent determination recognising the Ngarlawangga people’s claim to the non-exclusive rights to the area of land. The Ngarlawangga native

“We’ve lost much family in this time, both Elders and young ones. With the determination, we finally have a happy ending as our Country has been returned to us,” she said. Simon Hawkins, CEO, Yamatji Marlpa Aboriginal Corporation said the determination was a great day of celebration for the Ngarlawangga people.

title determination application was filed in 2005 and covers approximately 6100 km of land located within the Shires of East Pilbara and Meekatharra.

said the journey towards the Ngarlawangga

We finally have a happy ending as our Country has been returned to us.” - Dianne Limerick, Ngarlawangga Traditional Owner

Committee Board of Directors 2017

Billiton Iron Ore celebrated the signing of the

and coordinate the work.

The Project Agreement covers the area of the

Billiton and the Yinhawangka people is a positive

outcome after many years of negotiation.

Negotiations took four years to be finalised. During

“This agreement is a great achievement for all

people and helped establish the Yinhawangka

and Traditional Owners can co-exist if all parties

are willing to listen to one another and work co-

The Yinhawangka Aboriginal Corporation will

On 18 November 2016, the Nyiyaparli people signed a Land Access Agreement (LAA) with Greenmount Resources, a subsidiary of Capricorn Metals. The LAA will allow Capricorn to advance its Karlawinda Gold Project, a proposed gold mine 50km south-east of Newman, with Nyiyaparli Traditional Owners as partners. Simon Hawkins, YMAC CEO, said agreements like this LAA are the basis for a future of positive outcomes for Traditional Owners. “This agreement demonstrates how negotiating in good faith with Traditional Owners can prove to have a positive outcome for both parties.

It has far-reaching benefits for the community, not

“Our heritage and the environment are very much

only now, but in the future, enabling Nyiyaparli

linked and we as Traditional Owners want to work

and contracting opportunities “associated with

our heritage and the environment for future

represent the Nyiyaparli people for this project.

people in both cultural heritage and environmental

because radiocarbon dating showed the cave had

Eneabba shows that the Aboriginal people of the

been used for these purposes repeatedly over

“Archaeologists have long suspected that the

Carly Monks did the research with the help of

contained evidence of Aboriginal occupation, but

until now, research has only documented people’s

“This new information gives us an opportunity to

were discovered at the site. Thomas, Reg, and

look at how people’s use of the landscape, plants,

and animals changed over a long time period.”

would have used the cave as shelter during the hottest time of the year and to harvest food. Carly said the site is especially significant

UWA students, researchers, and volunteers all took part in the dig. Carly’s article was published in the scientific journal Australian Archaeology.

LEFT: The location of Yellabide Cave relative to nearby sites

RIGHT: Wilunyu Owners dde Cave, approximate position of Traditional the coastline at the and LGM,Carly and Monks the examine Yellabide Cave FEBRUARY 2017 |

On Friday, 4 November, YMAC celebrated the

opening of its new Hedland office in Wedgefield.

language. This illustrates what YMAC does best

the event which was officially opened by Kariyarra

- we talk to our members, elders and Traditional

Owners. Aboriginal culture is about talking and

sharing stories of culture and traditions.

The new office is a great space with modern

If you are in the Hedland area, please stop by the

Wedgefield office and say hi to Donny and his

As part of the celebrations, Pilbara Regional

Contact us: Send your questions, ideas, letters and photos to editor@ymac.org.au