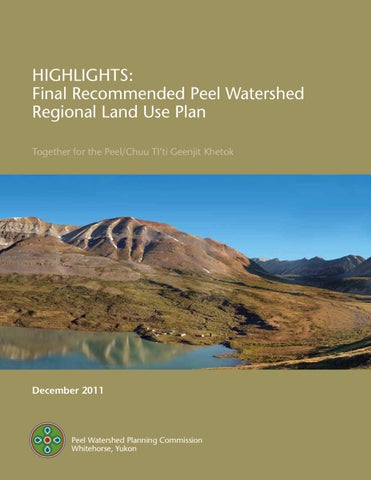 The Peel Watershed Planning Region is an unpopulated area in the northern Yukon about the size of New Brunswick (or 67,431 square km). It lies north of the village of Mayo and northeast of Dawson City. One all-season road, the Dempster Highway, crosses it. The northeastern part of the region is flat taiga, with mountains dominating the rest. This varied landscape is linked by the Peel River and its tributaries, the Ogilvie, Blackstone, Hart, Bonnet Plume, and Snake rivers. The region is valued for traditional and cultural pursuits, wilderness tourism, game outfitting, and trapping, as well as its mineral, oil and gas potential. It does not have any protected areas or other designations.

The Government of Yukon manages over 97 percent of the region, which is Crown land. Four First Nation governments from Yukon and NWT (the First Nation of Na-Cho Nyak Dun, the Tetłit Gwich’in Council, Tr‘ondëk Hwëch‘in, and the Vuntut Gwitchin First Nation) own and manage the rest. The entire region is within one or more of the traditional territories of these First Nations. B R ITIS H C OLUMB IA

This document presents only the highlights of the Plan and is not a complete summary. The complete version of the Final Recommended Peel Watershed Regional Land Use Plan is available at www.peel.planyukon.ca.

Highlights of the Final Recommended Plan 80% of the region is made up of Conservation Areas In these areas: • Existing oil and gas and mineral claims may remain. • New oil and gas and mineral claims, and new roads or trails, are not allowed. • There are two types of Conservation Areas: -- Special Management Areas: permanently protected areas that make up 55% of the region. -- Wilderness Areas: interim protected areas that make up 25% of the region and must be reviewed from time to time. 20% of the region is made up of Integrated Management Areas In these areas: • New oil and gas and mineral claims, as well as development (including roads), are allowed subject to the current regulatory process. • All new roads and trails must be reclaimed once they are no longer needed. • Three zones have been created, each with different levels of acceptable development. • The amount of development will be tracked using monitoring guidelines. There are 28 policy recommendations and 11 research recommendations For example: • A plan must be developed for the Dempster Highway Corridor. • The Wind River Trail should no longer be recognized as an existing route. • Off-road vehicles (except snowmobiles) should be restricted to certain locations and specific trails, and not allowed in sensitive habitats. • No new permanent infrastructure should be allowed along major rivers. • Government policy and operating guidelines that regulate uranium and coal bed methane activity should be created before exploring and developing these resources. • The Yukon government and regional First Nations must agree on a process for deciding if a development proposal fits with the Plan. The process should involve an appropriate thirdparty board or committee (such as the Yukon Land Use Planning Council).

For a complete list, and explanation of the context, see Appendix C in the complete version: www.peel.planyukon.ca.

For more information on zoning, please see the Land Use Designation System table on page 5.

Total * Note: zone numbering begins with Zone 2 to be consistent with the North Yukon Regional Land Use Plan

What does an Integrated Management Area mean? While no industrial development is allowed outside existing claims in Conservation Areas, some is allowed in the Integrated Management Areas (IMAs). The Plan recommends tracking â&#x20AC;&#x153;surface disturbanceâ&#x20AC;? (the amount of ground disturbed by development) in IMAs, and provides guidance on the amount of surface disturbance that is acceptable by creating different zones. More disturbance is acceptable in Zone IV, for example, than in Zone II. The Plan provides ways for keeping track of the total amount of these disturbances. By keeping track, the impact of all the development in an area can be monitored. What happens with existing mineral claims and oil and gas permits in the Conservation Areas? The Plan does not affect the ownership of mineral claims and leases. However, it stipulates that no roads or trails can be built across Conservation Areas. Mineral claims and leases can be reached by aircraft for exploration and development activities. Where can I get more information? You can find the full version of this Plan, supporting documents, resource maps, and PWPC news at www.peel.planyukon.ca. Go to www.emr.gov.yk.ca/lands/peel_watershed.html for updates on the Plan review process.

Above: The Wind River trail was used to haul equipment for mineral and oil and gas exploration in the 1950s. This type of disturbance, and others, would be allowed in limited amounts in the IMAs. Marcus Waterreus, Government of Yukon

Where are we now? Phases of Plan development Who

Time frame PEEL WATERSHED PLANNING COMMISSION TOGETHER FOR THE PEEL

consultation by Government of Yukon

Government of Yukon, and First Nation governments in the region, make final decision to approve, reject or modify the final recommended plan

Implementation of the approved Peel Watershed Regional Land Use Plan

Please send your questions and comments to all the governments listed below: Vuntut Gwitchin First Nation 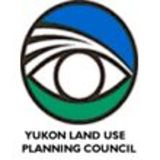 The highlights of the as yet unapproved plan for the Peel Watershed Planning Region which is an unpopulated area in the northern Yukon about...

The highlights of the as yet unapproved plan for the Peel Watershed Planning Region which is an unpopulated area in the northern Yukon about...