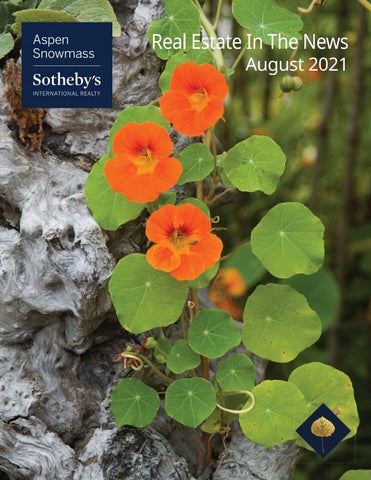 Real Estate In The News August 2021

“Whatever the mind of man can conceive and believe, it can achieve” -Napoleon Hill

The Aspen Center for Environmental Studies will get an upgrade at its Hallam Lake headquarters after Aspen City Council approved its application in July, the Aspen Daily News reported. The project will reconfigure vehicular and pedestrian access to the property, expand the visitor center and expand the Bird of Prey building. Improvements include a roundabout for buses and vehicles to make safer maneuvers, more workspace for staff, improving emergency access and upgrading access to the visitor center to better comply with the Americans with Disabilities Act. The developments will add 815 square feet to the visitor center, in addition to a classroom and much-needed extra workspace. Marolt Open Space Plan Approved

A 10-year management plan for the Marolt Open Space that largely leaves it untouched but keeps the door open for a feasibility study of a future bike park on the south side of the property, was approved by Aspen City Council in July, the Aspen Daily News reported. If the area, located between Castle Creek Road and the Marolt Place housing complex, is considered appropriate for a future bike park, the city’s parks and open space staff would seek public input prior to the implementation of any plan. The Marolt Open Space is a 74.5-acre parcel at the Entrance to Aspen that was obtained by the city in the early 1980s with the intent of it being a passive park that would serve as a hub for the trail system. It houses the Aspen Community Garden. Aspen Club Set for 2023-2024 Opening

The new ownership of the Aspen Club &amp; Spa property and redevelopment project has eyed the winter of 2023-24 for its reopening, the Aspen Times reported. Preliminary work is being done on the Aspen Club site to shape it up for the summer 2022, which is when construction is scheduled to begin in earnest. Meriwether Cos., which develops resort and private club projects, is teaming with Revere Capital and Fireside Investments on the redevelopment. The three entities collectively acquired the 5-acre property, located on Ute Avenue on the east side of town, for $52.59 million at a foreclosure auction Jan. 6. The property already has a foundation of approvals in place for redevelopment, which includes four-bedroom luxury condos, 10 three-bedroom luxury townhomes, four four-bedroom luxury townhomes and 12 worker-housing units. The residential aspect of the club would account for nearly 64,000 square feet. Also planned is a 60,838-square-foot club and spa with other amenities. Gorsuch Haus Partners Purchase Two Acres from SkiCo

The partners in the proposed Gorsuch Haus purchased about 2 acres of land at the base of Aspen Mountain, but don’t expect groundbreaking on the hotel any time soon, the Aspen Times reported. Norway Island LLC purchased the land for $10 million from Aspen Skiing Co., according to a special warranty deed filed with the Pitkin County Clerk and Recorder. The property sale included the existing lower terminal for Lift 1A and the surrounding buildings as well as vacant land farther up the slope.

At least 20 members of the Snowmass Club have expressed some dissatisfaction with the current conditions and dues at the private residence club, golf course and athletic facilities via several letters to the editor submitted to The Aspen Times. Those letter-writers cite increasing membership dues, questionable conditions at some facilities and an $800 annual food and beverage spending minimum currently usable at the only open restaurant as cause for concern. Some have expressed that they are considering leaving the club. An increase in athletic member dues from $330 per month to $415 per month was due to operating losses, rising product and staffing costs and other COVID-related expenses, ownership says. Renovations that will improve pool decks and mechanical equipment are planned in the next few years.

BCC Basalt, LLC, a development company run by Tim Belinski and Andrew Light, have submitted an application to Basalt Planning and Zoning Commission that proposes 59 market-rate and 11 deed-restricted upper-floor units and a roughly 9,000-square-foot grocery store in its bottom floor, the Aspen Times reported. According to BCC Basalt’s application, the grocery store would include standard items like fresh, frozen and prepared foods but also the possibility of local chefs at food bars. If approved, the developers would demolish the existing 24,500-square-foot, predominantly vacant building to make room for the new grocery store and mix of studio, one- and two-bedroom apartments above it. Basalt Residents’ Survey Says Housing is No. 1 Issue

Basalt residents are concerned about the pace of growth and the lack of affordable housing, according to results of a survey commissioned by the town government, the Aspen Times reported. Nearly 3,000 surveys were mailed to residents and business owners, with about a 10% return rate. Workforce housing, “green initiatives” and Midland Avenue streetscape improvements were among respondents’ top concerts. A new town hall and Willits parking expansion were among items at the bottom of the list. Basalt is in the process of prioritizing projects that it wants to pursue as a broad-sweeping community improvement effort called Basalt Forward 2030. The town has roughly $14 million in bonds that will be paid off in coming years through property taxes. The council is considering asking voters in November to approve new bonds that would offset those expiring without raising new property taxes.

A high-profile ranch outside of Carbondale that has been in the same family for four decades sold June 30 for $12.55 million, the Aspen Times reported. The Tybar Ranch, formerly renowned for its research on Angus cattle in partnership with Colorado State University, was sold by owner Emma Danciger and the DKD 2004 Trust to Turnabout Ranch LLC. Tybar is one of the largest remaining ranches along Prince Creek Road, an area that is getting converted from agricultural lands to small subdivisions. Representatives of the Tybar previously said the water rights for the ranch date back to 1892 and it appears a portion of the ranch was homesteaded even earlier. The Tybar sale was the highest priced ranch sale in the Carbondale-area since 2006, when the Bob and Ruth Perry ranch sold for $27.25 million. That sale involved 1,180 acres. Sopris Lodge Opens

Sopris Lodge, an assisted-living facility in Carbondale, officially opened to residents on July 7, the Sopris Sun reported. Located at 295 Rio Grande Avenue, just north of True Nature Healing Arts and next to the Rio Grande Trail, it consists of one building with 23 independent living apartments. A second building, with 24 memory care and assisted-living apartments, is scheduled to open for occupancy this fall. Designed by Z-Group Architects, the building has plenty of large windows and skylights for natural light. The interior design, by Storm Designs, Ltd., offers a tasteful décor with artistic light fixtures and cozy seating areas in communal spaces. Both companies are based in Aspen. A studio apartment of 411 square feet rents for $4,200 a month. While that may seem a little spendy, it also includes on-site concierge services, weekly housekeeping, covered carport parking, storage lockers and emergency alert pendants available upon request.

Pitkin County’s unemployment rate for June was 6.7%, a massive improvement over the same pandemic-plagued month last year when the jobless rate was 17.6% — the fifth highest among all of Colorado’s 64 counties, the Aspen Daily News reported. Figures released by the Colorado Department of Labor and Employment show that Pitkin County had 10,400 employed workers in June. That represents a gain of 695 workers, or 7.2%, compared with the 9,705 employed in June 2020. The state labor department reported the May 2020 rate for Pitkin County at 9.1%. Pitkin’s 6.7% jobless rate for June 2020 ranks it 13th among the state’s counties and is tied with Denver County’s rate. The increase in jobs can be attributed to the comeback of the service and hospitality industries, with restaurants, lodges and entertainment opening back up to almost 100% after a year of partial lockdowns. Coal Basin Mountain Biking System Opens

The Coal Basin Ranch near Redstone opened a new system of singletrack trails for public use in July as part of an effort to demonstrate that trails can be an important part of land restoration, the Aspen Daily News reported. The trail system is on private property owned by Crystal Basin Holdings LLC — owned by cousins Sam and Tom Walton — and is the former site of Mid-Continent Resources’ five coal mines. The roughly 5-mile trail system includes cross-country singletrack along a mountain creek through Douglas fir and spruce, as well as a flow trail descent through an aspen forest designed by Progressive Trail Design. In addition, the property boasts several jump lines, pump tracks and a Strider track for the youngest mountain bikers. The trail system will be open to the public, free of charge. It also provides a location for local schools that have mountain biking programs and outdoor education programs to have an optimized place to ride, run and hike while learning about restoration, sustainably built trails, stewardship and conservation. Delta Airlines to Resume Service in December

Delta Airlines will resume service to the Aspen area beginning Dec. 18, the Aspen Daily News reported. The return of Delta will lower airfares, at least temporarily, as United and American Airlines scramble to match prices. Delta will offer daily flights to Atlanta and Los Angeles throughout the winter season. 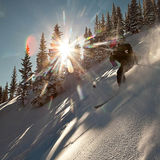