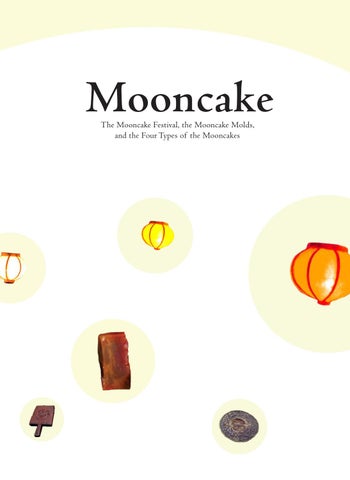 lanterns on towers, or floating sky lanterns. A sky lantern is a small hot air balloon made of paper, with an opening at the bottom where a small fire is suspended.

In ancient China, according to legend, empires held a memorial ceremony for the sun in the spring and a memorial ceremony for the moon in the autumn. The people also had the custom of hav- The Mid-Autumn Festival is a harvest festival celebrated by ethnic Chinese ing a memorial ceremony for the moon and Vietnamese people. The festival and bowing to the moon in worship during the August Mid-Autumn Festival. is held on the 15th day of the 8th month of the lunar calendar with the The mooncake was originally used full moon at night, corresponding as an offering to the goddess of the to late September to early October of moon. Then, people gradually began to the Gregorian calendar with the full appreciate the moon and eat mooncakes moon at night. in the Mid-Autumn Festival. Because Mainland China listed the festival as an the mooncake festival has always been â&#x20AC;&#x153;intangible cultural heritageâ&#x20AC;? in 2006 a time for families to get together, the and a public holiday in 2008. mooncake became a symbol of family reunion. After that, the mooncake became a traditional gift for the Mid-Autumn Festival. Mooncake 3

History of the Mid-Autumn Festival in China The Chinese have celebrated the harvest during the autumn full moon since the Shang dynasty (c. 1600â&#x20AC;&#x201C;1046 BCE). Morris Berkowitz, who studied the Hakka people during the 1960s, theorizes that the harvest celebration originally began with worshiping mountain gods after the harvest was completed. For the Baiyue peoples, the

harvest time commemorated the dragon who brought rain for the crops. The celebration as a festival only started to gain popularity during the early Tang dynasty (618â&#x20AC;&#x201C;907 CE). One legend explains that Emperor Xuanzong of Tang started to hold formal celebrations in his palace after having explored the Moon-Palace. The term mid-autumn first appeared in Rites of Zhou, a written collection of rituals of the Western Zhou dynasty (1046â&#x20AC;&#x201C;771 BCE).

Moon Worship An important part of the festival celebration is moon worship. The ancient Chinese believed in rejuvenation being associated with the moon and water, and connected this concept to the menstruation of women, calling it “monthly water”. The Zhuang people, for example, have an ancient fable saying the sun and moon are a couple and the stars are their children, and when the moon is pregnant, it becomes round, and then becomes crescent after giving birth to a child. These beliefs made it popular among women to worship and give offerings to the moon on this evening. In some areas of China, there are still customs in which “men worship the moon and the women offer sacrifices to the kitchen gods.”

Offerings are also made to a more well-known lunar deity, Chang’e, known as the Moon Goddess of Immortality. The myths associated with Chang’e explain the origin of moon worship during this day. One version of the

story is as follows, as described in Lihui Yang’s Handbook of Chinese Mythology. In the ancient past, there was a hero named Hou Yi who was excellent at archery. His wife was Chang’e. One year, the ten suns rose in the sky together, causing great disaster to people. Yi shot down nine of the suns and left only one to provide light. An immortal admired Yi and sent him the elixir of immortality. Yi did not want to leave Chang’e and be immortal without her, so he let Chang’e keep the elixir. But Peng Meng, one of his apprentices, knew this secret. So, on the fifteenth of August in the lunar calendar, when Yi went hunting, Peng Meng broke into Yi’s house and tried to force Chang’e to give the elixir to him. Chang’e refused to do so. Instead,

she swallowed it and flew into the sky. Since she loved her husband very much and hoped to live nearby, she chose the moon for her residence. When Yi came back and learned what had happened, he felt so sad that he displayed the fruits and cakes Chang’e liked in the yard and gave sacrifices to his wife. People soon learned about these activities, and since they were also sympathetic to Chang’e, they participated in these sacrifices with Yi. ­­­­­­—From Wikipedia

almost every family made their own mooncakes and mooncake molds in the Mid-Autumn Festival. Mooncake molds are made in different forms and different patterns.

Patterns of the Molds Mooncakes are decorated with many different patterns, such as images of peaches, carp, lotus, people, and so on. The most commonly used patterns are those showing animals and flowers. Also, these patterns are often combined with other motifs related to Chinese culture, such as the goddess Chang’s

flight to the moon, the twelve Chinese zodiac signs, good luck and so on. What’s more, the good luck patterns have Chinese words expressing prayer like “Fu”, “Lu”, “Shou”, “Xi”.

The mooncake mold can be said to be a record and archive of the Mid-Autumn Festival folk custom evolution; its art form is a history of several thousand years of cultural accumulation, a kind of manifestation of the traditional folk aesthetic concept, in a certain sense, showing the traditional Chinese folk art and modeling system. Mooncake 12

Engraving Process Even for experienced masters in the art, it takes two days to make a mooncake mold. From the conception to the choice of materials and from the knife to the technique, everything requires elegance and skill. The first step is to choose durable, solid wood, such as rosewood. Because these woods have wood grain, it is not always easy to make intricate carvings with a perfectly smooth surface without the wood cracking. The quality of materials is very important for making the mooncakes. After the wood is chosen, the wood is sawn into blocks about twenty centimeters thick. And then, based on the intended shape of the mooncake, the artist cuts the preliminary outline in

the wood with a knife; this is commonly known as the evolution process. Making the “Edge tooth” is the first step in creating any mooncake mold. This means that there needs to be an etched step-aligned pattern. This pattern not only enhances decorative cakes, but also facilitates the smooth separation of mooncake molds, which is why most mooncake molds need to have an “Edge tooth”. After the “edge tooth” is completed, the next step is that the master needs to engrave the front patterns. The crafting master is the key to making the mooncake mold, from its conception through the engraving process.

The 4 types of the Mooncakes Making and sharing mooncakes is one of the hallmark traditions of this festival. In Chinese culture, a round shape symbolizes completeness and reunion. Thus, the sharing and eating of round mooncakes among family members Mooncake 15

during the week of the festival signifies the completeness and unity of families. In some areas of China, there is a tradition of making mooncakes during the night of the Mid-Autumn Festival.

States, they are almost an essential food for some people. The most famous characteristic of this mooncake is that the skin is thin, and there is a lot of filling inside. The ratio of skin to filling for cantonese mooncakes is 2 to 8.

Beijing-style Mooncakes Beijing-style mooncakes come from Beijing, Tianjin and surrounding area, and they are more popular in the north. The defining characteristics of this type of mooncake are its filling, skin and moderate sweetness.. The ratio of skin to filling is 2 to 3. The biggest feature

Yunnan-style Mooncakes The original Yunnan-style mooncake is popular in Yunnan, Guizhou and the surrounding areas. At present, consumers from other parts of China are becoming increasingly fond of

Yunnan-style mooncakes. The most important feature of these mooncakes is the use of Yunnan ham with its unique flavor.

Suzhou-style Mooncakes Suzhou-style mooncakes come from Shanghai, Zhejiang and the surrounding area. The main characteristic of this delicacy is that the skin of the mooncake has a floppy mouth feel.

Fillings include five grains, bean pastes and so on. Suzhou-style mooncakes are the sweetest of all mooncakes.