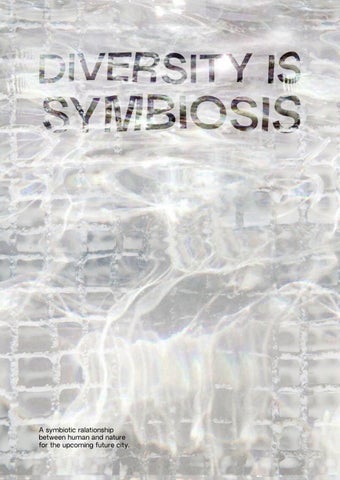 A symbiotic ralationship between human and nature for the upcoming future city.

Exploring the intangible concept of diversity, the installation Living Bridge aims to use a symbiotic relationship between human and nature to provide a possible solution for future scenarios - flooded cities caused by climate changes. Symbiosis embraces two different elements, seawater and rigid metal mesh, to create natural structural elements called Biorock. Living Bridge is constantly growing and solidifying in creating new wonders and dynamics, allowing each one to enjoy the beauty of diversity. 4

â&amp;#x2020;&amp;#x2019; people experience the bridge in New York City, walking on the installation.

WHAT IS DIVERSITY? Our idea of diversity was described through a concept video, which was later translated into a set. The final result has to be memorizable and linked to the space.

→ diversity is an ambition to achieve impossible.

→ diversity is stand out.

→ diversity is a distorted perception.

After individual research about diversity, we work together to find a more complex and meaningful interpretation and to stimulate the imagination of people. ELISA â&amp;#x2020;&amp;#x2019; diversity means emerging from a flat and monotonous background. Means to have some particularities or characteristics that are evident in comparison with what surrounds you. Diversity is stand out. YIDAN â&amp;#x2020;&amp;#x2019; diversity is an ambition to achieve impossible. As a designers we are defining the future of place, a biomimetc architecture that adapts any possible needs and conditions will allows us to live better in an uncertain environment. FRANCESCA â&amp;#x2020;&amp;#x2019; diversity is opening the mind to the possibility of new compositions, to have intuitions that change the subjective perception of things. Diversity is a distorted perception.

DIVERSITY IS SYMBIOSIS Humans take everything from nature for granted, leading us to a catastrophic situation. We must create a different relationship with nature and try to create a stable equilibrium. Instead of extracting from nature, we collaborate with nature. The city and architecture are created not only by humans, and only for humans, but also the nature force, for all of us. From this idea, we create a metaphor to express the possible relationship between humans and nature, showing how we collaborate together and what is the outcome.

Diversity as a consequence of the conditioning of two elements which, by coexisting, change their original status. Their interaction generates an unpredictable and sometimes surprising change.

Actions, inspirations and keywords with which we could act in the space.

Nendo Thin black lines + Dancing squares 2011, Taiwan Inside the installation, the design of the parquet floor is modified and distorted every time it comes into contact with an exhibitor. The parquet loses its peculiar characteristics, becoming a soft black trace.

Andrea Branzi, Simbiosi vase, 2005 The glass structure and the flower stem work together, remaining separate. The glass seems to be an unsuitable material to be intertwined with flowers, and the â&amp;#x20AC;&amp;#x153;supporting bodyâ&amp;#x20AC;? of the work seems to be the flowers. By crossing the boundaries between different logics and chemistry it is possible to create new conditions of coexistence.

Andrea Branzi + Stefano Boeri La Grand Paris, 2008 The architects faced the possibility of developing new strategies for an integrated coexistence between humans and animals, creating unexpected situations and changing the rhythm of the city.

The Why Factory, Workshop Biodiversity 2.0, Delft, 2011 The project will challenge the current mode of city making based on pure artificiality. It is looking for new modes of city design that incorporates the life of animals and their natural habitat into our daily existence. Moreover, the project research in which ways humans can contribute to increase biodiversity.

â&amp;#x2020;&amp;#x2019; INTERACTION BETWEEN ELEMENTS Tokujin Yoshioka Second Nature exhibition 2008, Tokyo The artist in his works tries to create visual similarities with nature and to reproduce its process. He investigates the mysterious beauty of nature, such as crystallization, creating works in which the natural process create defined forms.

Salottobuono, Teatrino, Archweek, Triennale di Milano, 2018 The roof structure is made of 8 cables anchored at the top of the base and tensioned by a helium balloon. Along the cables there is a triangular covering made of nautical fabric. This temporary installation uses balances to create a new type of roof. The materials used, if taken separately, do not have the right characteristics to create a roof. But working together, as if they were in symbiosis, they make the structure stable.

PROVIDE STABILITY Following our concept, we have identified the function of the bridge as a connection between two parts that previously had no connection. The installation aims to connect elements that usually have no common points, forcing new relationships.

The man tries to find solutions to make the structure more stable. His solution is temporary, it has not a long lasting duration.

Thanks to the unforeseen help of nature, the bridge acquires stability and balance.

RISING OF The world we live in has been continuously transformed by man and is in a precarious balance. The consequences of his behavior are inevitable and are getting closer in terms of time. Global warming and sea level rise are current issues which, over the years, lead to the submergence of some cities. 30

Sea levels are rising due to melting ice and thermal expansion related to global warming. As a result of these risks, many coastal cities are already planning adaptation measures to cope with the long-term prospects of higher sea levels. â&amp;#x2020;&amp;#x2019; Venice, Miami, Shanghai, Mumbai, Bangkok are some of the coastal cities that will be submerged by the sea.

Our project is an installation that can be placed in any city to raise awareness on this issue. We chose the city of New York to set the project, creating strong contrasts between the urban context and the intervention of nature.

AQUEDUCT? During ancient times it was used to â&amp;#x20AC;&amp;#x153;guideâ&amp;#x20AC;? the water from one place to another bringing it to the cities, where it was more needed.

In the future it will be used to connect cities and buildings since road will not be usable anymore due to the rise of sea level. Its modularity allows the bridge to be conformable to the city, adapting to its shape.

How it was water going over the bridge

How it will be water going through the bridge

HOW WILL THE FUTURE BE?

UNDERWATER In our distopic scenario, the climate change has left much of the city under water, therefore, humans create living bridges that â&amp;#x20AC;&amp;#x153;invited nature to interveneâ&amp;#x20AC;? and to reconnect buildings and cities.

Humans start to create the bridge to be prepared for this problem. The huge wireframe structures will appear in the centre of the city: these monuments remind people of the fact that the city will be flooded in the upcoming future.

When water begins to rise, the bridge starts to be used as a new connection in the city, the submerged part in the sea-water will solidify by the process of biorock.

Along with the rising of sea level, the bridge becomes an growing architecture that begins to blur the boundary between artifice and nature producing building elements.

THE MODULAR BRIDGE The living bridge is designed to be placed everywhere needed, and it could grow as situation of sea level. The aqueduct is made by different modules, it can be adapted to the situations in which the installation will be located. â&amp;#x2020;&amp;#x2019; The installation can be inserted in the city without being finished, it can grow in the following years: it is an architecture in evolution, which adapts to the rhythms of the city and nature.

Vertical and horizontal evolution of the bridge.

The union between the outer layer and the inner layer is made by a strip of wire mesh, tied with small nylon knots that are then burned to be fixed.

← 02. The model is made by layers of folded wire mesh.

← 03. The cutting of arches and floors per inner layer of the model.

The outer layer of the model. Before definitely choosing how to do it, we tried to close the arches with a wire

←↓ Comparison between the model with only one layer of wire mesh and, the same model, with an inner layer. With the aim of making the biorock grow, we opted for the double layer, to have the structure itself more solid.

a living material - BIOROCK is a substance formed by electro-accumulation of minerals dissolved in seawater.The biorock building process grows like marine ecosystems, such as corals in salt water. It works by passing electric current through electrodes in the water, and the structure grows more or less without limit as long as current flows.

The material was invented by Wolf Hilbertz (architect and marine scientist), who developed the process and registered a patent in 1979. The material is also known as “seacrete” or “seament”.

At first, the steel wires are used to build the substratum to guide the growth of biorock. zoom ↓

During the growth process, the structure will become a habitat for sea creatures.

As a result, in the meantime, biorock grows as a constructive material.

ITEMS NEEDED After several attempts with different amounts of salts and chlorides, we understood the approximate proportions to make the metal grid react with salt. The elements reported here are the ingredients and some tools useful for the realization of the experiment.

* The quantities refer to the experiment conducted on the small-scale model.

← 01. All the ingredients are dissolved in water.

After 48 hours, the first biorock formations are visible on the surface

into the water and connected to the battery, which is also linked to an aluminium strip. The process begins

is a visible layer of biorock on the bottom of the model. The plastic is immersed again to continue the process.

03.4 - PHOTOS The structure of the model was placed in water to start the biorock formation reaction. The photos present different stages, from 48 to 192 hours of immersion, and aim to make the thickening of the wire mesh visible through the formation of biorock.

The storyboard of the video shows our narrative thinking of the whole project which is based on scenario and storytelling. We tried to picture it in the New York City which is currently facing the problem, however, the project is designed for many places. While the project is based on time, we showed it in a chronological way to better convey the essential of the project.

SCENE 1 : News on the newspaper about the sea level and flooded city. SCENE 2 : City works normally during the construction of the bridge.

SCENE 19: Reveal the scene on the background. SCENE 20: Total model show up. SCENE 21/ SCENE 22 /SCENE 23 /SCENE 24 : A close look of bridge to observe the gradience of biorock on the structure. SCENE 25: Diversity is symbiosis.

3 /SCENE 4 : Zoom - worker working on the bridge. 5 : Bridge built based on the condition. 6 : Flood invade the city. 7 : The sea level rises. 8: People live the city as in Venice canals. 9: Zoom on the people on the boat. 10: New balance between human and nature. 11 : People experience the canal as a seashore. 12: Life underwater is growing and take over the city. 13: Underwater bridge with biorock on the base. 14 /SCENE 15/ SCENE 16 : Growing process of biorock. 17: People walking on the bridge (view from outside). 18: People walking on the bridge (view inside the bridge). 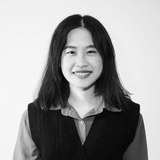