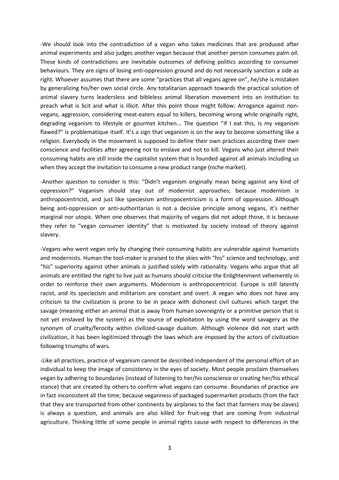 -We should look into the contradiction of a vegan who takes medicines that are produced after animal experiments and also judges another vegan because that another person consumes palm oil. These kinds of contradictions are inevitable outcomes of defining politics according to consumer behaviours. They are signs of losing anti-oppression ground and do not necessarily sanction a side as right. Whoever assumes that there are some “practices that all vegans agree on”, he/she is mistaken by generalizing his/her own social circle. Any totalitarian approach towards the practical solution of animal slavery turns leadersless and bibleless animal liberation movement into an institution to preach what is licit and what is illicit. After this point those might follow: Arrogance against nonvegans, aggression, considering meat-eaters equal to killers, becoming wrong while originally right, degrading veganism to lifestyle or gourmet kitchen... The question “If I eat this, is my veganism flawed?” is problematique itself. It’s a sign that veganism is on the way to become something like a religion. Everybody in the movement is supposed to define their own practices according their own conscience and facilities after agreeing not to enslave and not to kill. Vegans who just altered their consuming habits are still inside the capitalist system that is founded against all animals including us when they accept the invitation to consume a new product range (niche market). -Another question to consider is this: “Didn’t veganism originally mean being against any kind of oppression?” Veganism should stay out of modernist approaches; because modernism is anthropocentricist, and just like speciesism anthropocentricism is a form of oppression. Although being anti-oppression or anti-authoritarian is not a decisive principle among vegans, it’s neither marginal nor utopic. When one observes that majority of vegans did not adopt those, it is because they refer to “vegan consumer identity” that is motivated by society instead of theory against slavery. -Vegans who went vegan only by changing their consuming habits are vulnerable against humanists and modernists. Human the tool-maker is praised to the skies with “his” science and technology, and “his” superiority against other animals is justified solely with rationality. Vegans who argue that all animals are entitled the right to live just as humans should criticise the Enlightenment vehemently in order to reinforce their own arguments. Modernism is anthropocentricist. Europe is still latently racist, and its speciecism and militarism are constant and overt. A vegan who does not have any criticism to the civilization is prone to be in peace with dishonest civil cultures which target the savage (meaning either an animal that is away from human sovereignty or a primitive person that is not yet enslaved by the system) as the source of exploitation by using the word savagery as the synonym of cruelty/ferocity within civilized-savage dualism. Although violence did not start with civilization, it has been legitimized through the laws which are imposed by the actors of civilization following triumphs of wars. -Like all practices, practice of veganism cannot be described independent of the personal effort of an individual to keep the image of consistency in the eyes of society. Most people proclaim themselves vegan by adhering to boundaries (instead of listening to her/his conscience or creating her/his ethical stance) that are created by others to confirm what vegans can consume. Boundaries of practice are in fact inconsistent all the time; because veganness of packaged supermarket products (from the fact that they are transported from other continents by airplanes to the fact that farmers may be slaves) is always a question, and animals are also killed for fruit-veg that are coming from industrial agriculture. Thinking little of some people in animal rights cause with respect to differences in the A self-critical manifesto towards veganism called “Restless Vegans” is issued from Turkey, following a workshop called “Where is animal libe...

A self-critical manifesto towards veganism called “Restless Vegans” is issued from Turkey, following a workshop called “Where is animal libe...