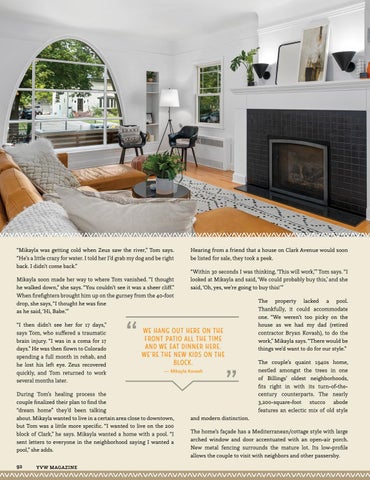 “Mikayla was getting cold when Zeus saw the river,” Tom says. “He’s a little crazy for water. I told her I’d grab my dog and be right back. I didn’t come back.” Mikayla soon made her way to where Tom vanished. “I thought he walked down,” she says. “You couldn’t see it was a sheer cliff.” When firefighters brought him up on the gurney from the 40-foot drop, she says, “I thought he was fine as he said, ‘Hi, Babe.’” “I then didn’t see her for 17 days,” says Tom, who suffered a traumatic brain injury. “I was in a coma for 17 days.” He was then flown to Colorado spending a full month in rehab, and he lost his left eye. Zeus recovered quickly, and Tom returned to work several months later.

WE HANG OUT HERE ON THE FRONT PATIO ALL THE TIME AND WE EAT DINNER HERE. WE’RE THE NEW KIDS ON THE BLOCK. — Mikayla Kovash

During Tom’s healing process the couple finalized their plan to find the “dream home” they’d been talking about. Mikayla wanted to live in a certain area close to downtown, but Tom was a little more specific. “I wanted to live on the 200 block of Clark,” he says. Mikayla wanted a home with a pool. “I sent letters to everyone in the neighborhood saying I wanted a pool,” she adds. 92

Hearing from a friend that a house on Clark Avenue would soon be listed for sale, they took a peek.

The property lacked a pool. Thankfully, it could accommodate one. “We weren’t too picky on the house as we had my dad (retired contractor Bryan Kovash), to do the work,” Mikayla says. “There would be things we’d want to do for our style.” The couple’s quaint 1940s home, nestled amongst the trees in one of Billings’ oldest neighborhoods, fits right in with its turn-of-thecentury counterparts. The nearly 3,200-square-foot stucco abode features an eclectic mix of old style

and modern distinction. The home’s façade has a Mediterranean/cottage style with large arched window and door accentuated with an open-air porch. New metal fencing surrounds the mature lot. Its low-profile allows the couple to visit with neighbors and other passersby.