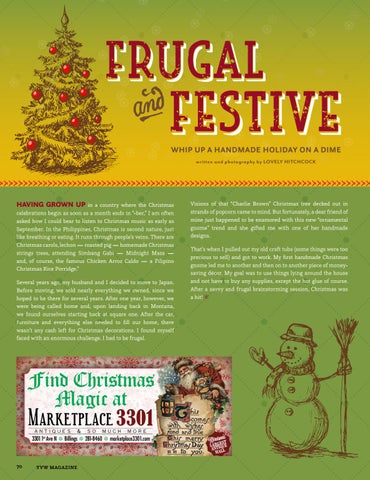 in a country where the Christmas celebrations begin as soon as a month ends in “-ber,” I am often asked how I could bear to listen to Christmas music as early as September. In the Philippines, Christmas is second nature, just like breathing or eating. It runs through people’s veins. There are Christmas carols, lechon — roasted pig — homemade Christmas strings trees, attending Simbang Gabi — Midnight Mass — and, of course, the famous Chicken Arroz Caldo — a Filipino Christmas Rice Porridge.” Several years ago, my husband and I decided to move to Japan. Before moving, we sold nearly everything we owned, since we hoped to be there for several years. After one year, however, we were being called home and, upon landing back in Montana, we found ourselves starting back at square one. After the car, furniture and everything else needed to fill our home, there wasn’t any cash left for Christmas decorations. I found myself faced with an enormous challenge. I had to be frugal.

Visions of that “Charlie Brown” Christmas tree decked out in strands of popcorn came to mind. But fortunately, a dear friend of mine just happened to be enamored with this new “ornamental gnome” trend and she gifted me with one of her handmade designs. That’s when I pulled out my old craft tubs (some things were too precious to sell) and got to work. My first handmade Christmas gnome led me to another and then on to another piece of moneysaving décor. My goal was to use things lying around the house and not have to buy any supplies, except the hot glue of course. After a savvy and frugal brainstorming session, Christmas was a hit! ✻