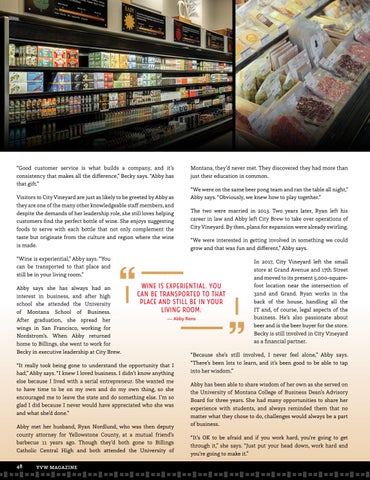 “Good customer service is what builds a company, and it’s consistency that makes all the difference,” Becky says. “Abby has that gift.” Visitors to City Vineyard are just as likely to be greeted by Abby as they are one of the many other knowledgeable staff members, and despite the demands of her leadership role, she still loves helping customers find the perfect bottle of wine. She enjoys suggesting foods to serve with each bottle that not only complement the taste but originate from the culture and region where the wine is made.

Montana, they’d never met. They discovered they had more than just their education in common. “We were on the same beer pong team and ran the table all night,” Abby says. “Obviously, we knew how to play together.” The two were married in 2013. Two years later, Ryan left his career in law and Abby left City Brew to take over operations of City Vineyard. By then, plans for expansion were already swirling. “We were interested in getting involved in something we could grow and that was fun and different,” Abby says.

“Wine is experiential,” Abby says. “You can be transported to that place and still be in your living room.” Abby says she has always had an interest in business, and after high school she attended the University of Montana School of Business. After graduation, she spread her wings in San Francisco, working for Nordstrom’s. When Abby returned home to Billings, she went to work for Becky in executive leadership at City Brew.

WINE IS EXPERIENTIAL. YOU CAN BE TRANSPORTED TO THAT PLACE AND STILL BE IN YOUR LIVING ROOM. — Abby Reno

“It really took being gone to understand the opportunity that I had,” Abby says. “I knew I loved business. I didn’t know anything else because I lived with a serial entrepreneur. She wanted me to have time to be on my own and do my own thing, so she encouraged me to leave the state and do something else. I’m so glad I did because I never would have appreciated who she was and what she’d done.” Abby met her husband, Ryan Nordlund, who was then deputy county attorney for Yellowstone County, at a mutual friend’s barbecue 11 years ago. Though they’d both gone to Billings Catholic Central High and both attended the University of 48

In 2017, City Vineyard left the small store at Grand Avenue and 17th Street and moved to its present 5,000-squarefoot location near the intersection of 32nd and Grand. Ryan works in the back of the house, handling all the IT and, of course, legal aspects of the business. He’s also passionate about beer and is the beer buyer for the store. Becky is still involved in City Vineyard as a financial partner.

“Because she’s still involved, I never feel alone,” Abby says. “There’s been lots to learn, and it’s been good to be able to tap into her wisdom.” Abby has been able to share wisdom of her own as she served on the University of Montana College of Business Dean’s Advisory Board for three years. She had many opportunities to share her experience with students, and always reminded them that no matter what they chose to do, challenges would always be a part of business. “It’s OK to be afraid and if you work hard, you’re going to get through it,” she says. “Just put your head down, work hard and you’re going to make it.”