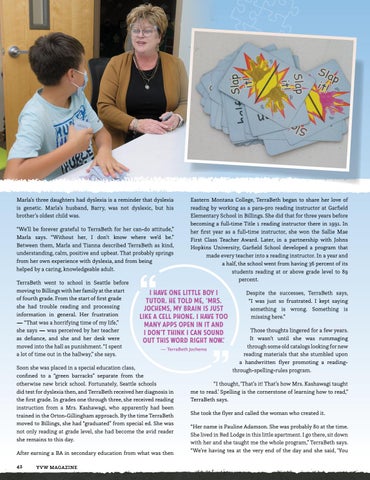 Marla’s three daughters had dyslexia is a reminder that dyslexia is genetic. Marla’s husband, Barry, was not dyslexic, but his brother’s oldest child was. “We’ll be forever grateful to TerraBeth for her can-do attitude,” Marla says. “Without her, I don’t know where we’d be.” Between them, Marla and Tianna described TerraBeth as kind, understanding, calm, positive and upbeat. That probably springs from her own experience with dyslexia, and from being helped by a caring, knowledgeable adult. TerraBeth went to school in Seattle before moving to Billings with her family at the start of fourth grade. From the start of first grade she had trouble reading and processing information in general. Her frustration — “That was a horrifying time of my life,” she says — was perceived by her teacher as defiance, and she and her desk were moved into the hall as punishment. “I spent a lot of time out in the hallway,” she says.

I HAVE ONE LITTLE BOY I TUTOR. HE TOLD ME, ‘MRS. JOCHEMS, MY BRAIN IS JUST LIKE A CELL PHONE. I HAVE TOO MANY APPS OPEN IN IT AND I DON’T THINK I CAN SOUND OUT THIS WORD RIGHT NOW.’ — TerraBeth Jochems

Soon she was placed in a special education class, confined to a “green barracks” separate from the otherwise new brick school. Fortunately, Seattle schools did test for dyslexia then, and TerraBeth received her diagnosis in the first grade. In grades one through three, she received reading instruction from a Mrs. Kashawagi, who apparently had been trained in the Orton-Gillingham approach. By the time TerraBeth moved to Billings, she had “graduated” from special ed. She was not only reading at grade level, she had become the avid reader she remains to this day. After earning a BA in secondary education from what was then 42

Eastern Montana College, TerraBeth began to share her love of reading by working as a para-pro reading instructor at Garfield Elementary School in Billings. She did that for three years before becoming a full-time Title 1 reading instructor there in 1991. In her first year as a full-time instructor, she won the Sallie Mae First Class Teacher Award. Later, in a partnership with Johns Hopkins University, Garfield School developed a program that made every teacher into a reading instructor. In a year and a half, the school went from having 36 percent of its students reading at or above grade level to 89 percent. Despite the successes, TerraBeth says, “I was just so frustrated. I kept saying something is wrong. Something is missing here.” Those thoughts lingered for a few years. It wasn’t until she was rummaging through some old catalogs looking for new reading materials that she stumbled upon a handwritten flyer promoting a readingthrough-spelling-rules program.

“I thought, ‘That’s it! That’s how Mrs. Kashawagi taught me to read.’ Spelling is the cornerstone of learning how to read,” TerraBeth says. She took the flyer and called the woman who created it. “Her name is Pauline Adamson. She was probably 80 at the time. She lived in Red Lodge in this little apartment. I go there, sit down with her and she taught me the whole program,” TerraBeth says. “We’re having tea at the very end of the day and she said, ‘You