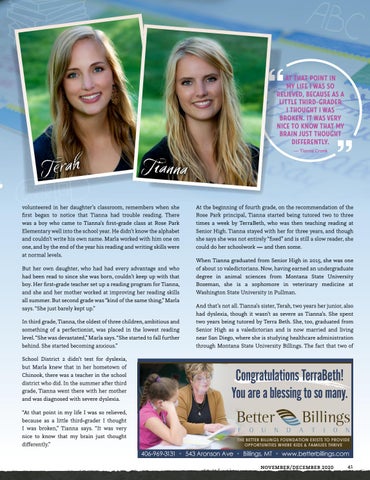 AT THAT POINT IN MY LIFE I WAS SO RELIEVED, BECAUSE AS A LITTLE THIRD-GRADER I THOUGHT I WAS BROKEN. IT WAS VERY NICE TO KNOW THAT MY BRAIN JUST THOUGHT DIFFERENTLY. — Tianna Cronk

volunteered in her daughter’s classroom, remembers when she first began to notice that Tianna had trouble reading. There was a boy who came to Tianna’s first-grade class at Rose Park Elementary well into the school year. He didn’t know the alphabet and couldn’t write his own name. Marla worked with him one on one, and by the end of the year his reading and writing skills were at normal levels. But her own daughter, who had had every advantage and who had been read to since she was born, couldn’t keep up with that boy. Her first-grade teacher set up a reading program for Tianna, and she and her mother worked at improving her reading skills all summer. But second grade was “kind of the same thing,” Marla says. “She just barely kept up.” In third grade, Tianna, the oldest of three children, ambitious and something of a perfectionist, was placed in the lowest reading level. “She was devastated,” Marla says. “She started to fall further behind. She started becoming anxious.” School District 2 didn’t test for dyslexia, but Marla knew that in her hometown of Chinook, there was a teacher in the school district who did. In the summer after third grade, Tianna went there with her mother and was diagnosed with severe dyslexia. “At that point in my life I was so relieved, because as a little third-grader I thought I was broken,” Tianna says. “It was very nice to know that my brain just thought differently.”

At the beginning of fourth grade, on the recommendation of the Rose Park principal, Tianna started being tutored two to three times a week by TerraBeth, who was then teaching reading at Senior High. Tianna stayed with her for three years, and though she says she was not entirely “fixed” and is still a slow reader, she could do her schoolwork — and then some. When Tianna graduated from Senior High in 2015, she was one of about 10 valedictorians. Now, having earned an undergraduate degree in animal sciences from Montana State University Bozeman, she is a sophomore in veterinary medicine at Washington State University in Pullman. And that’s not all. Tianna’s sister, Terah, two years her junior, also had dyslexia, though it wasn’t as severe as Tianna’s. She spent two years being tutored by Terra Beth. She, too, graduated from Senior High as a valedictorian and is now married and living near San Diego, where she is studying healthcare administration through Montana State University Billings. The fact that two of

Congratulations TerraBeth! You are a blessing to so many. THE BETTER BILLINGS FOUNDATION EXISTS TO PROVIDE OPPORTUNITIES WHERE KIDS & FAMILIES THRIVE