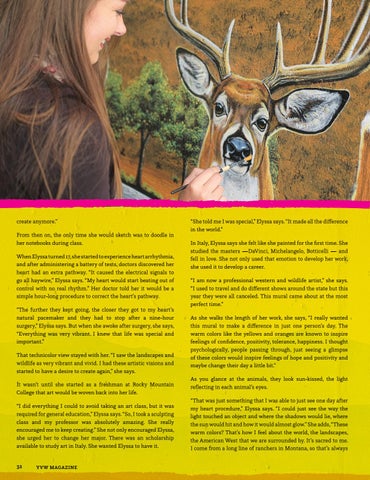 create anymore.” From then on, the only time she would sketch was to doodle in her notebooks during class. When Elyssa turned 17, she started to experience heart arrhythmia, and after administering a battery of tests, doctors discovered her heart had an extra pathway. “It caused the electrical signals to go all haywire,” Elyssa says. “My heart would start beating out of control with no real rhythm.” Her doctor told her it would be a simple hour-long procedure to correct the heart’s pathway. “The further they kept going, the closer they got to my heart’s natural pacemaker and they had to stop after a nine-hour surgery,” Elyssa says. But when she awoke after surgery, she says, “Everything was very vibrant. I knew that life was special and important.” That technicolor view stayed with her. “I saw the landscapes and wildlife as very vibrant and vivid. I had these artistic visions and started to have a desire to create again,” she says. It wasn’t until she started as a freshman at Rocky Mountain College that art would be woven back into her life. “I did everything I could to avoid taking an art class, but it was required for general education,” Elyssa says. “So, I took a sculpting class and my professor was absolutely amazing. She really encouraged me to keep creating.” She not only encouraged Elyssa, she urged her to change her major. There was an scholarship available to study art in Italy. She wanted Elyssa to have it. 32

“She told me I was special,” Elyssa says. “It made all the difference in the world.” In Italy, Elyssa says she felt like she painted for the first time. She studied the masters —DaVinci, Michelangelo, Botticelli — and fell in love. She not only used that emotion to develop her work, she used it to develop a career. “I am now a professional western and wildlife artist,” she says. “I used to travel and do different shows around the state but this year they were all canceled. This mural came about at the most perfect time.” As she walks the length of her work, she says, “I really wanted this mural to make a difference in just one person’s day. The warm colors like the yellows and oranges are known to inspire feelings of confidence, positivity, tolerance, happiness. I thought psychologically, people passing through, just seeing a glimpse of these colors would inspire feelings of hope and positivity and maybe change their day a little bit." As you glance at the animals, they look sun-kissed, the light reflecting in each animal’s eyes. “That was just something that I was able to just see one day after my heart procedure,” Elyssa says. “I could just see the way the light touched an object and where the shadows would lie, where the sun would hit and how it would almost glow.” She adds, “These warm colors? That’s how I feel about the world, the landscapes, the American West that we are surrounded by. It’s sacred to me. I come from a long line of ranchers in Montana, so that’s always