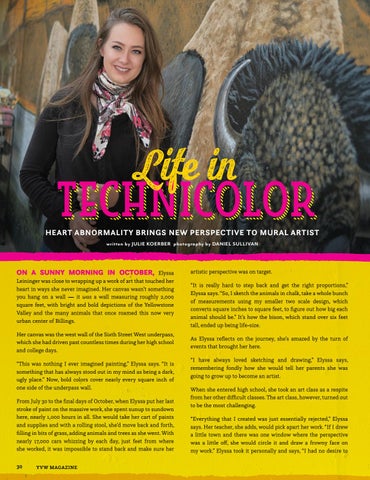 ON A SUNNY MORNING IN OCTOBER,

Elyssa Leininger was close to wrapping up a work of art that touched her heart in ways she never imagined. Her canvas wasn’t something you hang on a wall — it was a wall measuring roughly 2,000 square feet, with bright and bold depictions of the Yellowstone Valley and the many animals that once roamed this now very urban center of Billings. Her canvas was the west wall of the Sixth Street West underpass, which she had driven past countless times during her high school and college days. “This was nothing I ever imagined painting,” Elyssa says. “It is something that has always stood out in my mind as being a dark, ugly place.” Now, bold colors cover nearly every square inch of one side of the underpass wall. From July 30 to the final days of October, when Elyssa put her last stroke of paint on the massive work, she spent sunup to sundown here, nearly 1,000 hours in all. She would take her cart of paints and supplies and with a rolling stool, she’d move back and forth, filling in bits of grass, adding animals and trees as she went. With nearly 17,000 cars whizzing by each day, just feet from where she worked, it was impossible to stand back and make sure her 30

artistic perspective was on target. “It is really hard to step back and get the right proportions,” Elyssa says. “So, I sketch the animals in chalk, take a whole bunch of measurements using my smaller two scale design, which converts square inches to square feet, to figure out how big each animal should be.” It’s how the bison, which stand over six feet tall, ended up being life-size. As Elyssa reflects on the journey, she’s amazed by the turn of events that brought her here. “I have always loved sketching and drawing,” Elyssa says, remembering fondly how she would tell her parents she was going to grow up to become an artist. When she entered high school, she took an art class as a respite from her other difficult classes. The art class, however, turned out to be the most challenging. “Everything that I created was just essentially rejected,” Elyssa says. Her teacher, she adds, would pick apart her work. “If I drew a little town and there was one window where the perspective was a little off, she would circle it and draw a frowny face on my work.” Elyssa took it personally and says, “I had no desire to