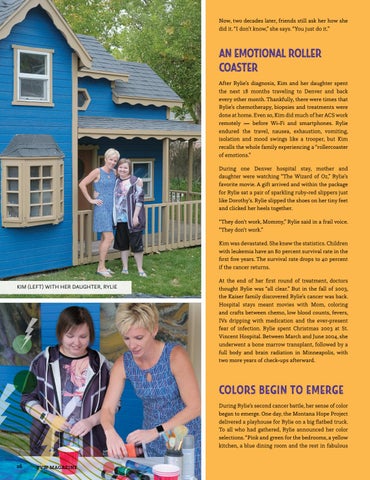 Now, two decades later, friends still ask her how she did it. “I don’t know,” she says. “You just do it.”

AN EMOTIONAL ROLLER COASTER After Rylie’s diagnosis, Kim and her daughter spent the next 18 months traveling to Denver and back every other month. Thankfully, there were times that Rylie’s chemotherapy, biopsies and treatments were done at home. Even so, Kim did much of her ACS work remotely — before Wi-Fi and smartphones. Rylie endured the travel, nausea, exhaustion, vomiting, isolation and mood swings like a trooper, but Kim recalls the whole family experiencing a “rollercoaster of emotions.” During one Denver hospital stay, mother and daughter were watching “The Wizard of Oz,” Rylie’s favorite movie. A gift arrived and within the package for Rylie sat a pair of sparkling ruby-red slippers just like Dorothy’s. Rylie slipped the shoes on her tiny feet and clicked her heels together. “They don't work, Mommy,” Rylie said in a frail voice. “They don't work.” Kim was devastated. She knew the statistics. Children with leukemia have an 80 percent survival rate in the first five years. The survival rate drops to 40 percent if the cancer returns. KIM (LEFT) WITH HER DAUGHTER, RYLIE

At the end of her first round of treatment, doctors thought Rylie was “all clear.” But in the fall of 2003, the Kaiser family discovered Rylie’s cancer was back. Hospital stays meant movies with Mom, coloring and crafts between chemo, low blood counts, fevers, IVs dripping with medication and the ever-present fear of infection. Rylie spent Christmas 2003 at St. Vincent Hospital. Between March and June 2004, she underwent a bone marrow transplant, followed by a full body and brain radiation in Minneapolis, with two more years of check-ups afterward.

COLORS BEGIN TO EMERGE During Rylie’s second cancer battle, her sense of color began to emerge. One day, the Montana Hope Project delivered a playhouse for Rylie on a big flatbed truck. To all who had gathered, Rylie announced her color selections. “Pink and green for the bedrooms, a yellow kitchen, a blue dining room and the rest in fabulous 26