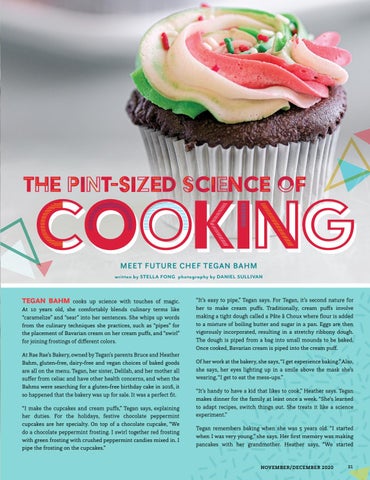 The pint-sized science of

cooks up science with touches of magic. At 10 years old, she comfortably blends culinary terms like “caramelize” and “sear” into her sentences. She whips up words from the culinary techniques she practices, such as “pipes” for the placement of Bavarian cream on her cream puffs, and “swirl” for joining frostings of different colors. At Rae Rae’s Bakery, owned by Tegan’s parents Bruce and Heather Bahm, gluten-free, dairy-free and vegan choices of baked goods are all on the menu. Tegan, her sister, Delilah, and her mother all suffer from celiac and have other health concerns, and when the Bahms were searching for a gluten-free birthday cake in 2016, it so happened that the bakery was up for sale. It was a perfect fit. “I make the cupcakes and cream puffs,” Tegan says, explaining her duties. For the holidays, festive chocolate peppermint cupcakes are her specialty. On top of a chocolate cupcake, “We do a chocolate peppermint frosting. I swirl together red frosting with green frosting with crushed peppermint candies mixed in. I pipe the frosting on the cupcakes.”

“It’s easy to pipe,” Tegan says. For Tegan, it’s second nature for her to make cream puffs. Traditionally, cream puffs involve making a tight dough called a Pâte â Choux where flour is added to a mixture of boiling butter and sugar in a pan. Eggs are then vigorously incorporated, resulting in a stretchy ribbony dough. The dough is piped from a bag into small mounds to be baked. Once cooked, Bavarian cream is piped into the cream puff. Of her work at the bakery, she says, “I get experience baking.” Also, she says, her eyes lighting up in a smile above the mask she’s wearing, “I get to eat the mess-ups.” “It’s handy to have a kid that likes to cook,” Heather says. Tegan makes dinner for the family at least once a week. “She’s learned to adapt recipes, switch things out. She treats it like a science experiment.” Tegan remembers baking when she was 5 years old. “I started when I was very young,” she says. Her first memory was making pancakes with her grandmother. Heather says, “We started