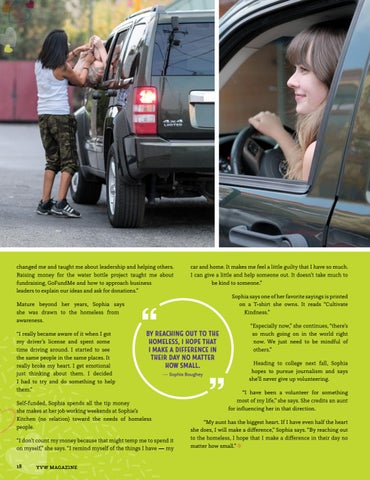 changed me and taught me about leadership and helping others. Raising money for the water bottle project taught me about fundraising, GoFundMe and how to approach business leaders to explain our ideas and ask for donations.”

car and home. It makes me feel a little guilty that I have so much. I can give a little and help someone out. It doesn’t take much to be kind to someone.” Sophia says one of her favorite sayings is printed on a T-shirt she owns. It reads “Cultivate Kindness.”

Mature beyond her years, Sophia says she was drawn to the homeless from awareness. “I really became aware of it when I got my driver’s license and spent some time driving around. I started to see the same people in the same places. It really broke my heart. I get emotional just thinking about them. I decided I had to try and do something to help them.”

BY REACHING OUT TO THE HOMELESS, I HOPE THAT I MAKE A DIFFERENCE IN THEIR DAY NO MATTER HOW SMALL. — Sophia Boughey

Self-funded, Sophia spends all the tip money she makes at her job working weekends at Sophie’s Kitchen (no relation) toward the needs of homeless people. “I don’t count my money because that might temp me to spend it on myself,” she says. “I remind myself of the things I have — my 18

“Especially now,” she continues, “there’s so much going on in the world right now. We just need to be mindful of others.” Heading to college next fall, Sophia hopes to pursue journalism and says she’ll never give up volunteering. “I have been a volunteer for something most of my life,” she says. She credits an aunt for influencing her in that direction.

“My aunt has the biggest heart. If I have even half the heart she does, I will make a difference,” Sophia says. “By reaching out to the homeless, I hope that I make a difference in their day no matter how small.” ✻