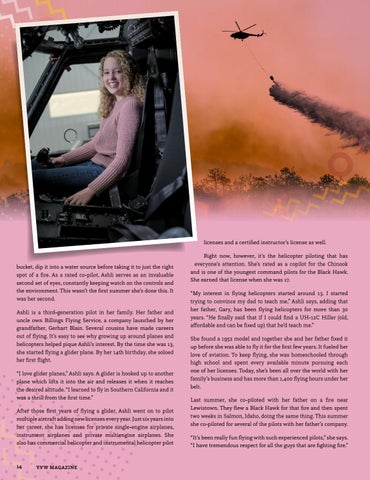 licenses and a certified instructor’s license as well.

bucket, dip it into a water source before taking it to just the right spot of a fire. As a rated co-pilot, Ashli serves as an invaluable second set of eyes, constantly keeping watch on the controls and the environment. This wasn’t the first summer she’s done this. It was her second. Ashli is a third-generation pilot in her family. Her father and uncle own Billings Flying Service, a company launched by her grandfather, Gerhart Blain. Several cousins have made careers out of flying. It’s easy to see why growing up around planes and helicopters helped pique Ashli’s interest. By the time she was 13, she started flying a glider plane. By her 14th birthday, she soloed her first flight. “I love glider planes,” Ashli says. A glider is hooked up to another plane which lifts it into the air and releases it when it reaches the desired altitude. “I learned to fly in Southern California and it was a thrill from the first time.” After those first years of flying a glider, Ashli went on to pilot multiple aircraft adding new licenses every year. Just six years into her career, she has licenses for private single-engine airplanes, instrument airplanes and private multiengine airplanes. She also has commercial helicopter and instrumental helicopter pilot

Right now, however, it’s the helicopter piloting that has everyone’s attention. She’s rated as a copilot for the Chinook and is one of the youngest command pilots for the Black Hawk. She earned that license when she was 17. “My interest in flying helicopters started around 13. I started trying to convince my dad to teach me,” Ashli says, adding that her father, Gary, has been flying helicopters for more than 30 years. “He finally said that if I could find a UH-12C Hiller (old, affordable and can be fixed up) that he’d teach me.” She found a 1952 model and together she and her father fixed it up before she was able to fly it for the first few years. It fueled her love of aviation. To keep flying, she was homeschooled through high school and spent every available minute pursuing each one of her licenses. Today, she’s been all over the world with her family’s business and has more than 1,400 flying hours under her belt. Last summer, she co-piloted with her father on a fire near Lewistown. They flew a Black Hawk for that fire and then spent two weeks in Salmon, Idaho, doing the same thing. This summer she co-piloted for several of the pilots with her father’s company. “It’s been really fun flying with such experienced pilots,” she says. “I have tremendous respect for all the guys that are fighting fire.”