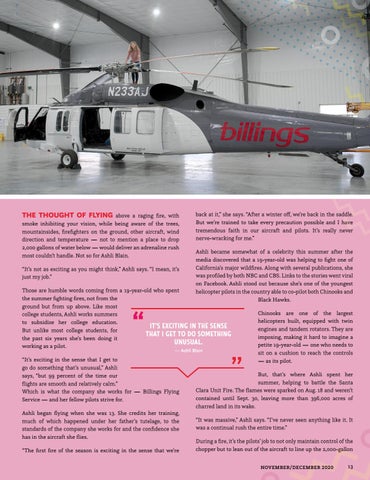 THE THOUGHT OF FLYING

above a raging fire, with smoke inhibiting your vision, while being aware of the trees, mountainsides, firefighters on the ground, other aircraft, wind direction and temperature — not to mention a place to drop 2,000 gallons of water below — would deliver an adrenaline rush most couldn’t handle. Not so for Ashli Blain. “It’s not as exciting as you might think,” Ashli says. “I mean, it’s just my job.”

back at it,” she says. “After a winter off, we’re back in the saddle. But we’re trained to take every precaution possible and I have tremendous faith in our aircraft and pilots. It’s really never nerve-wracking for me.” Ashli became somewhat of a celebrity this summer after the media discovered that a 19-year-old was helping to fight one of California’s major wildfires. Along with several publications, she was profiled by both NBC and CBS. Links to the stories went viral on Facebook. Ashli stood out because she’s one of the youngest helicopter pilots in the country able to co-pilot both Chinooks and Black Hawks.

Those are humble words coming from a 19-year-old who spent the summer fighting fires, not from the ground but from up above. Like most college students, Ashli works summers to subsidize her college education. IT'S EXCITING IN THE SENSE But unlike most college students, for THAT I GET TO DO SOMETHING the past six years she’s been doing it UNUSUAL. working as a pilot. — Ashli Blain

“It’s exciting in the sense that I get to go do something that’s unusual,” Ashli says, “but 99 percent of the time our flights are smooth and relatively calm.” Which is what the company she works for — Billings Flying Service — and her fellow pilots strive for. Ashli began flying when she was 13. She credits her training, much of which happened under her father’s tutelage, to the standards of the company she works for and the confidence she has in the aircraft she flies. “The first fire of the season is exciting in the sense that we’re

Chinooks are one of the largest helicopters built, equipped with twin engines and tandem rotators. They are imposing, making it hard to imagine a petite 19-year-old — one who needs to sit on a cushion to reach the controls — as its pilot.

But, that’s where Ashli spent her summer, helping to battle the Santa Clara Unit Fire. The flames were sparked on Aug. 18 and weren’t contained until Sept. 30, leaving more than 396,000 acres of charred land in its wake. “It was massive,” Ashli says. “I’ve never seen anything like it. It was a continual rush the entire time.” During a fire, it’s the pilots’ job to not only maintain control of the chopper but to lean out of the aircraft to line up the 2,000-gallon NOVEMBER/DECEMBER 2020