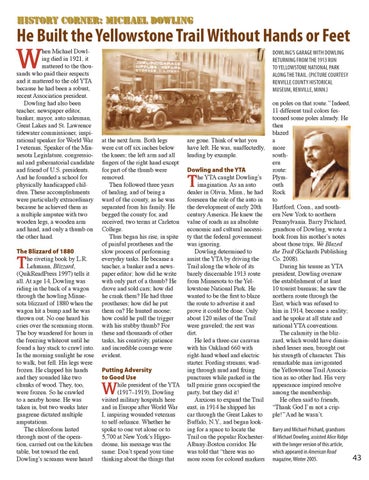 He Built the Yellowstone trail Without Hands or Feet

hen Michael Dowling died in 1921, it mattered to the thousands who paid their respects and it mattered to the old YTA because he had been a robust, recent Association president. Dowling had also been teacher, newspaper editor, banker, mayor, auto salesman, Great Lakes and St. Lawrence tidewater commissioner, inspirational speaker for World War I veterans, Speaker of the Minnesota Legislature, congressional and gubernatorial candidate and friend of U.S. presidents. And he founded a school for physically handicapped children. These accomplishments were particularly extraordinary because he achieved them as a multiple amputee with two wooden legs, a wooden arm and hand, and only a thumb on the other hand.

The Blizzard of 1880 he riveting book by L.R. Lehmann, Blizzard, (QuikReadPress 1997) tells it all. At age 14, Dowling was riding in the back of a wagon through the howling Minnesota blizzard of 1880 when the wagon hit a bump and he was thrown out. No one heard his cries over the screaming storm. The boy wandered for hours in the freezing whiteout until he found a hay stack to crawl into. In the morning sunlight he rose to walk, but fell. His legs were frozen. He clapped his hands and they sounded like two chunks of wood. They, too, were frozen. So he crawled to a nearby house. He was taken in, but two weeks later gangrene dictated multiple amputations. The chloroform lasted through most of the operation, carried out on the kitchen table, but toward the end, Dowling’s screams were heard

at the next farm. Both legs were cut off six inches below the knees; the left arm and all fingers of the right hand except for part of the thumb were removed. Then followed three years of healing, and of being a ward of the county, as he was separated from his family. He begged the county for, and received, two terms at Carleton College. Thus began his rise, in spite of painful prostheses and the slow process of performing everyday tasks. He became a teacher, a banker and a newspaper editor; how did he write with only part of a thumb? He drove and sold cars; how did he crank them? He had three prostheses; how did he put them on? He hunted moose; how could he pull the trigger with his stubby thumb? For these and thousands of other tasks, his creativity, patience and incredible courage were evident. Putting adversity to Good Use hile president of the YTA (1917–1919), Dowling visited military hospitals here and in Europe after World War I, inspiring wounded veterans to self-reliance. Whether he spoke to one vet alone or to 5,700 at New York’s Hippodrome, his message was the same: Don’t spend your time thinking about the things that

are gone. Think of what you have left. He was, unaffectedly, leading by example. Dowling and the YTa he YTA caught Dowling’s imagination. As an auto dealer in Olivia, Minn., he had foreseen the role of the auto in the development of early 20th century America. He knew the value of roads as an absolute economic and cultural necessity that the federal government was ignoring. Dowling determined to assist the YTA by driving the Trail along the whole of its barely discernable 1913 route from Minnesota to the Yellowstone National Park. He wanted to be the first to blaze the route to advertise it and prove it could be done. Only about 120 miles of the Trail were graveled; the rest was dirt. He led a three-car caravan with his Oakland 660 with right-hand wheel and electric starter. Fording streams, wading through mud and fixing punctures while parked in the tall prairie grass occupied the party, but they did it! Anxious to expand the Trail east, in 1914 he shipped his car through the Great Lakes to Buffalo, N.Y., and began looking for a space to locate the Trail on the popular RochesterAlbany-Boston corridor. He was told that “there was no more room for colored markers

on poles on that route.” Indeed, 11 different trail colors festooned some poles already. He then blazed a more southern route: Plymouth Rock to Hartford, Conn., and southern New York to northern Pennsylvania. Barry Prichard, grandson of Dowling, wrote a book from his mother’s notes about those trips, We Blazed the Trail (Richards Publishing Co. 2008). During his tenure as YTA president, Dowling oversaw the establishment of at least 10 tourist bureaus; he saw the northern route through the East, which was refused to him in 1914, become a reality; and he spoke at all state and national YTA conventions. The calamity in the blizzard, which would have diminished lesser men, brought out his strength of character. This remarkable man invigorated the Yellowstone Trail Association as no other had. His very appearance inspired resolve among the membership. He often said to friends, “Thank God I’m not a cripple!” And he wasn’t. barry and Michael Prichard, grandsons of Michael Dowling, assisted Alice Ridge with the longer version of this article, which appeared in American Road magazine, Winter 2005.

The 100th Anniversary edition of Driving the Yellowstone Trail, a transcontinental auto route.