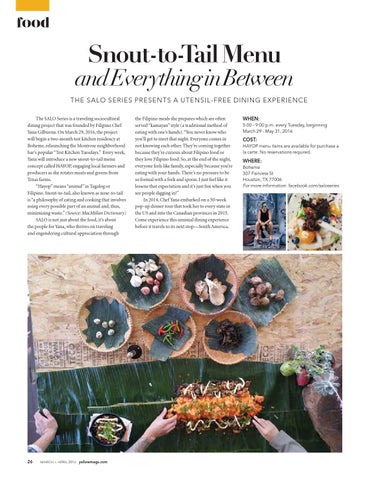 and Everything in Between The SALO Series presents a Utensil-Free Dining Experience The SALO Series is a traveling sociocultural dining project that was founded by Filipino Chef Yana Gilbuena. On March 29, 2016, the project will begin a two-month test kitchen residency at Boheme, relaunching the Montrose neighborhood bar’s popular “Test Kitchen Tuesdays.” Every week, Yana will introduce a new snout-to-tail menu concept called HAYOP, engaging local farmers and producers as she rotates meats and greens from Texas farms. “Hayop” means “animal” in Tagalog or Filipino. Snout-to-tail, also known as nose-to-tail is “a philosophy of eating and cooking that involves using every possible part of an animal and, thus, minimizing waste.” (Source: MacMillan Dictionary) SALO is not just about the food, it’s about the people for Yana, who thrives on traveling and engendering cultural appreciation through

the Filipino meals she prepares which are often served “kamayan” style (a traditional method of eating with one’s hands). “You never know who you’ll get to meet that night. Everyone comes in not knowing each other. They’re coming together because they’re curious about Filipino food or they love Filipino food. So, at the end of the night, everyone feels like family, especially because you’re eating with your hands. There’s no pressure to be so formal with a fork and spoon. I just feel like it lessens that expectation and it’s just fun when you see people digging in!” In 2014, Chef Yana embarked on a 50-week pop-up dinner tour that took her to every state in the US and into the Canadian provinces in 2015. Come experience this unusual dining experience before it travels to its next stop—South America. 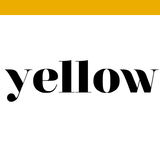