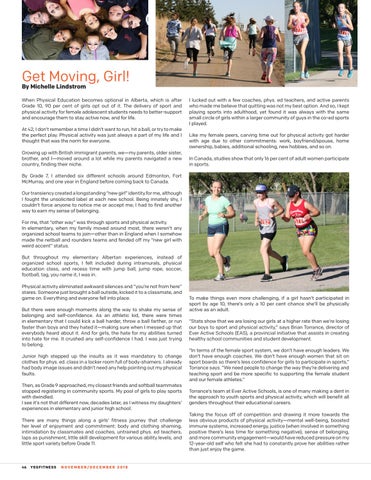 Get Moving, Girl! By Michelle Lindstrom When Physical Education becomes optional in Alberta, which is after Grade 10, 90 per cent of girls opt out of it. The delivery of sport and physical activity for female adolescent students needs to better-support and encourage them to stay active now, and for life. At 42, I don’t remember a time I didn’t want to run, hit a ball, or try to make the perfect play. Physical activity was just always a part of my life and I thought that was the norm for everyone. Growing up with British immigrant parents, we—my parents, older sister, brother, and I—moved around a lot while my parents navigated a new country, finding their niche.

I lucked out with a few coaches, phys. ed teachers, and active parents who made me believe that quitting was not my best option. And so, I kept playing sports into adulthood, yet found it was always with the same small circle of girls within a larger community of guys in the co-ed sports I played. Like my female peers, carving time out for physical activity got harder with age due to other commitments: work, boyfriend/spouse, home ownership, babies, additional schooling, new hobbies, and so on. In Canada, studies show that only 16 per cent of adult women participate in sports.

By Grade 7, I attended six different schools around Edmonton, Fort McMurray, and one year in England before coming back to Canada. Our transiency created a longstanding “new girl” identity for me, although I fought the unsolicited label at each new school. Being innately shy, I couldn’t force anyone to notice me or accept me; I had to find another way to earn my sense of belonging. For me, that “other way” was through sports and physical activity. In elementary, when my family moved around most, there weren’t any organized school teams to join—other than in England when I somehow made the netball and rounders teams and fended off my “new girl with weird accent” status. But throughout my elementary Albertan experiences, instead of organized school sports, I felt included during intramurals, physical education class, and recess time with jump ball, jump rope, soccer, football, tag, you name it, I was in. Physical activity eliminated awkward silences and “you’re not from here” stares. Someone just brought a ball outside, kicked it to a classmate, and game on. Everything and everyone fell into place. But there were enough moments along the way to shake my sense of belonging and self-confidence. As an athletic kid, there were times in elementary that I could kick a ball harder, throw a ball farther, or run faster than boys and they hated it—making sure when I messed up that everybody heard about it. And for girls, the hate for my abilities turned into hate for me. It crushed any self-confidence I had. I was just trying to belong. Junior high stepped up the insults as it was mandatory to change clothes for phys. ed. class in a locker room full of body-shamers. I already had body image issues and didn’t need any help pointing out my physical faults. Then, as Grade 9 approached, my closest friends and softball teammates stopped registering in community sports. My pool of girls to play sports with dwindled. I see it’s not that different now, decades later, as I witness my daughters’ experiences in elementary and junior high school. There are many things along a girls’ fitness journey that challenge her level of enjoyment and commitment: body and clothing shaming, intimidation by classmates and coaches, untrained phys. ed teachers, laps as punishment, little skill development for various ability levels, and little sport variety before Grade 11.

To make things even more challenging, if a girl hasn’t participated in sport by age 10, there’s only a 10 per cent chance she’ll be physically active as an adult. “Stats show that we are losing our girls at a higher rate than we’re losing our boys to sport and physical activity,” says Brian Torrance, director of Ever Active Schools (EAS), a provincial initiative that assists in creating healthy school communities and student development. “In terms of the female sport system, we don’t have enough leaders. We don’t have enough coaches. We don’t have enough women that sit on sport boards so there’s less confidence for girls to participate in sports,” Torrance says. “We need people to change the way they’re delivering and teaching sport and be more specific to supporting the female student and our female athletes.” Torrance’s team at Ever Active Schools, is one of many making a dent in the approach to youth sports and physical activity, which will benefit all genders throughout their educational careers. Taking the focus off of competition and drawing it more towards the less obvious products of physical activity—mental well-being, boosted immune systems, increased energy, justice (when involved in something positive there’s less time for something negative), sense of belonging, and more community engagement—would have reduced pressure on my 12-year-old self who felt she had to constantly prove her abilities rather than just enjoy the game. 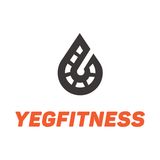