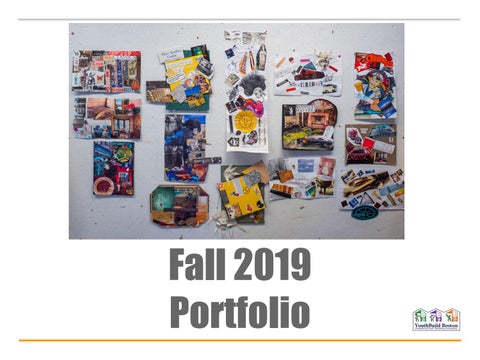 Using a pepper, interns were introduced to orthogonal drawing relationships as well as plan and section representation. By sketching, interns learned the unique way of viewing and representation in top, front and side views that is universal throughout the design industry. Cutting open the pepper in half reveals a section or a plan view, further reinforcing the internâ&#x20AC;&#x2122;s understanding of drawing conventions prevalent in the design industry.

The Cube Project – Chipboard Models The Cube project is one of the introduction project for The Designery Interns. The project teaches model making, orthogonal drafting, and visual thinking. Each intern produced a 4”x4”x4” cube and manipulated any number of 1” square surface by pushing or pulling. A chip board model was made and plan section, elevations was produced.

Lead Designer: Tayu Ting Intern Designers: Isaiah Josephs, Anghel Martinez, Hannah DeFreitas, AJ Green The Animal Habitat project teaches the interns to understand and apply scale, model-making techniques, observation, technical drawing skills, and client-focused design. Interns learned how to use the architectural scale and reinforced the model-making skills from their experience from the cube exercise. Using their observations from a trip to the site, the interns began by documenting and diagraming the site conditions to inform their proposals.

The Animal Habitat Project After researching on the Shark needs and observing the site and its climate, the students designed a two-story building with a shark tank, ticket booth, gift shop, and food court. The second-floor platform provides the opportunity for people and staff members to feed and engage with sharks.

The Tiger Habitat project was introduced to the students through a site discovery where each interns had to produce a set of 2 sections and one site plan in which they identified major key elements such as surrounding building, access, â&#x20AC;Ś Based on their analysis , they were able to apply their model-making technique into a site model for their Tiger Habitat. Site Visit + Site Model

The Animal Habitat Project After researching on the Tiger needs and creating a site survey , the students designed this double floor design with a pond and tree piercing through the second floor to allow the tiger to climb up and have more space. Those drawing represent this habitat and its climate.

The site locates in Dorchester with an existing urban greenhouse, grow beds, and rain garden. The height of the greenhouse is 10ft that provides room for vertical growing. The aquaponics system allows water to continually circulated through the system, fish eat and produce waste to elicit bacteria growth, therefore acting as a natural fertilizer for plants to absorb.

424 Geneva Farm : Aquaponic System Process: Interns began by exploring different types of aquaponic systems and researching the five essential components the system. The five components are: fish tank, solid filter, bio filter, sump tank, and grow beds. Following this research each interns were asked to diagram circulation and design their system for the site in a vertical manner.

424 Geneva Farm : Aquaponic System Preliminary sketches and drawings Exhibited a Nutrient Film Technique (NFT) system which the plants are grown in long narrow channels. A thin film of water continuously flows down each channel, providing the plant roots with water, nutrients and oxygen. Hanna worked on the water circulation of the system. Isaiah began to design the size and the structure of the wooden fishpond. Anghel completed the grow bed diagram. Abdul created a 1:1 study model to help understand size and tubing distance of the system.

424 Geneva Farm : Aquaponic System The development of the models demonstrates the ways in which the interns transformed 2-dimensional concepts into 3-dimensional models. The process also form understanding to create structures and supports for the final mockup. In the smaller scale models, the interns began to grapple with the investigation of joinery and irrigation tubing methods.

The team started the project of the vertical garden by experimenting and research different type of growing systems. By selecting edible plants that could grow in the new England environment , their narrow search allow them to select among their system and to find out which one would be more adequate for the well being of their plants.

This model is based on the selection of tomatoes, cucumber and onions as the plants that will be use in the system. Each pots allow the plants to grow with enough space considering its mature size and the roots length. It gives an average pot size of 3â&#x20AC;? X5â&#x20AC;? according to the needs of one plant.

During their First review, the team represented their design approach and were encourage to create a more inclusive size for the pot considering all other type of plants ( seasonal, or bi- annual ) and to think about the site in a broader sense. Therefore they created this site plan representing the different factor affecting the wall such as sunlight.

After learning about way to improve, the interns created a set of drawing to explain the functioning of the vertical garden.

The vertical garden resulted by obtaining larger pots and by connecting it to a fish tank and 2 filters. They learned from the other team how to make it work and functional and which aspect of their design needed to be adjusted.

The final model is made of PT timber and waterproof wood sheets assembled and the pots shall be retained by the pond liner. This structure can be multiplied and easily assembled and detached to the green house for maintenance.

Context: YouthBuild Boston is developing a single family residential project near Uphams Corner in Boston to match an existing building adjacent to the site. Due to the site grading, the basement is ideal to be converted into an additional dwelling unit, with its own separate entry. Our work is to design this separate unit.

24 Trull St. ADU Connecticut: â&#x20AC;&#x153;The purpose is allow greater housing choice in Tolland by increasing the allowable size of certain accessory dwelling units and allowing accessory dwelling units in detached structures with some limitations.â&#x20AC;? What impressed us the most was that what they wanted was really simple but very beneficial to many people. They were just asking to allow more dwelling units to have more housing units for people to move into. They still want to keep the major rules in place, like the single family houses, but are just asking for more units.

Oakland: In order To align itself with State Law, Bay Area jurisdictions have implemented regulations regarding the construction and rental of ADUâ&#x20AC;&#x2122;s. Oakland was somewhat of a pioneer in easing restrictions even before the new laws went into effect. We were impressed by the requirements that the ADU must have a combined living, eating, and sleeping room not less than 220 sq ft, and an additional 100 sq ft of superficial floor area per occupant in excess of two (2). ADU must have a separate clothes closet, approved cabinet adjacent to kitchen sink for storing food, crockery, cutlery, and cooking utensils, and the ADU must have a private bathroom with toilet, lavatory, and bathtub or shower receptor.

Los Angeles: This program will provide homeowners in unincorporated LA County with a forgivable loan of $75,000 to construct an ADU that will house people transitioning out of homelessness, for a minimum of ten years. The homeless population benefit because these housing units are made specifically for them, and to house them. They have no competition in the market for a better candidate, or someone who could potentially out buy them. The LA area or neighborhood also benefits because homeless people are being taken off the street that provides a better looking neighborhood

Design Narrative: We developed a fictitious client, who will be a young family with a child living in the unit above. The ADU is occupied by the grandparent of the child, who provides child care for the family on a daily basis.

Interior Elevations: We hand drafted important interior elevations of the kitchen and bathroom. This exercise helped us understand the critical dimensions of equipment, materials, and the results of our design decisions in the floor plan.

Systems: For a space to be inhabitable, there requires mechanical and plumbing systems. We brain stormed different systems that is required to make a space suitable for inhabitation and used colored basswood to indicate these connections.

Accessibility: We included an unobstructed turning diameter of 5’-0” in the bathroom, with the intention that this unit can support an individual with mobility challenges. However, the original kitchen proposal was tight and problematic. So we revised the kitchen to an “L” shape, which made It more accessible. The Designery at YouthBuild Boston