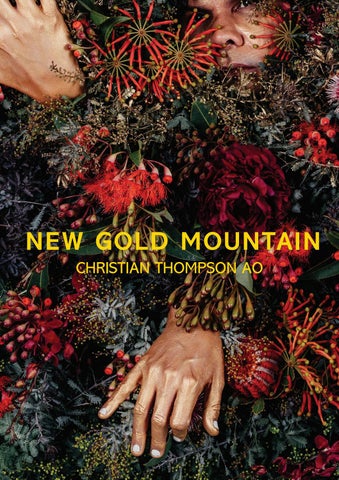 If flowers could talk, what would they tell us? Would they begin introducing themselves by spinning a tale about their roots or launch into gossip about the other genus growing beside them? Perhaps they’d eventually do both, and I’d like to think Christian Thompson could be there too, happily sitting amongst them, chatting away. For more than two decades, Thompson’s distinct visual language, known for its use of Australian native flora, has reckoned with the collapsing distinctions between place, belonging and nationhood in so-called Australia. For Thompson, flowers are not only a vital signifier but also provoke questions around ownership, power structures, and identity. Unlike earlier photographic iterations where Thompson himself dons selected flora reconfigured into crown-like structures, is shrouded in them, or visually concealed from the viewer, a new framework has emerged over recent years in the form of a flower wall: selected blooms are pruned, amassed, and woven into richly filled lattices. They form expansive and immersive configurations that allow Thompson to emerge and re-emerge, time and time again, inviting us into these portal-like worlds to reflect and consider what such questions mean to us. In his new photographic work, New Gold Mountain (Xin Jin Shan), Thompson continues his signature flower-wall motif, incorporating a selection of chrysanthemums, lilies, and orchids, which pay homage to his southern-Chinese heritage. Thompson’s paternal grandmother, Harriet Woods, who was a seamstress and carer to the artist’s great uncle after he returned from World War II, is also a direct descendant of the Chinese migrants who immigrated during the Victorian gold rush in the early 1850s. This specific historical lineage has spurred renewed interest for Thompson, as an introspective guide but also to pivot us toward a publicly lesser-known side of his own heritage. Thompson is both part of the oldest living culture on the planet and the oldest continuous immigrant group to Australia after those from the British Isles. But these cultural and historical intersections that reference Thompson’s heritage do not solely end with him. Instead, these photographic works act as a mirror to our history, highlighting the many nuanced intersections that make up contemporary Australian identities. Within the large-scale photograph sharing the exhibition’s title, New Gold Mountain (Xin Jin Shan), we find Thompson’s golden doll-like face peering through a constellation of chosen flora with a striking colour palette: crimson red, lapis lazuli, and ivory white. Six hands, digitally multiplied and painted in a shimmering bronze coat create a crescent-like shape, inadvertently framing Thompson’s face, and prompting our gaze up to the top of the image. Here, we find two hands delicately holding a set of wind chimes dangling out in front of the densely covered flower-wall. Commonly thought of in parts of Asia as a sign of good luck, these wind chimes are suspended, caught in a moment of stillness, and ultimately kept out of reach: their tinkling sound yet to be disturbed; their luck yet to be heard. The chimes too reference a distinct part of Thompson’s childhood, which he can still recall memories of running up and down his grandmother’s hallway to touch them as if to unconsciously counter the good fortune within her household.

Sprigs of golden wattles are also pictured. Gold is a distinct colour reminiscent of a more dominant and popular connotation bound to Australian identity. Established in the mid-1980s, under the advice of then Prime Minister Bob Hawke, the ‘green and gold’ became the national colours of Australia along the appropriation of the wattle as our national flower. Their inclusion act as a reminder of how these visual forms of nationhood continue to linger within contemporary Australia, despite the nation continuing to grow and evolve into such an ethnically and culturally diverse place. In Double Happiness, we find Thompson again, pictured twice, gazing out from a mix of rich, vibrant florals. This conception of the double or the ‘doubling’ effect is a motif that suggests a deconstruction of the self/subject binary. It is a division or split that disintegrates into a collapsing self that no longer has two opposing sides but, in its place, contains multiple ones. This rings true for Thompson, who consistently over the past twenty-one years, has reimagined and reconfigured the many varying visual iterations of himself in over one hundred works. It could also, in part, be seen as a self-reflexive act, one that solidifies his ability to draw from and revisit his influences, experiences and personal histories that ruminate within him. “I am a conduit, a sponge. I’ve always had this bower bird like quality, absorbing everything that is taking place around me,” Christian tells me. The past eighteen months living through multiple lockdowns in Melbourne amid the global pandemic has proven to be a mixed blessing for Thompson. As our usual schedules have been completely ruptured, abandoned, or drastically altered, his time in confinement was opportunity to reconnect with a complex inner world, to rebuild the creative stories that an artist needs to make their work. Thompson’s intense creative ambition is also echoed in a new video work, Burdi Burdi (Fire Fire). Its soundtrack, sung and remixed by the artist, is eerily reminiscent of the famous score of David Lynch’s early 90s mystery-horror serial drama, Twin Peaks: a show he obsessively watched in high school. Thompson’s ability to extract his past, from his formative years growing up all over Australia to living through isolating periods of lockdowns in Melbourne, has propelled this newfound energy. Unravelling within these works are the signs of a new leaf turning over.

Chelsea Hopper is a curator and writer based in Narrm/Melbourne.

“If flowers could talk, what would they tell us?” 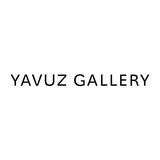