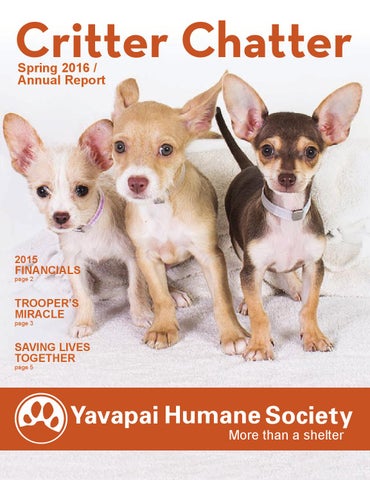 More than a shelter

Many ask how the Yavapai Humane Society (YHS) achieved and sustained “No-Kill” for five consecutive years. YHS defines “no-kill” as applying the same criteria to deciding a homeless animal’s fate that an owner or conscientious veterinarian applies to a beloved pet. That is, animals are never euthanized out of convenience or a lack of resources – which is sadly the norm in many shelters. Instead, YHS depends on creative and effective ways to reach underserved populations with programs that provide spay/neuter services and pet retention support. This is accomplished by identifying the connection between human populations with the greatest need and animal populations at greatest risk. In this, way YHS is able to implement targeted programs designed to humanely reduce the number of homeless pets most at risk of dying prematurely in a shelter. These targeted lifesaving YHS programs include: • New Hope, which maximizes the limited resources of over 60 animal welfare organizations throughout the southwest working together to ensure every shelter animal finds a loving home. • STAR (Special Treatment and Recovery) provides medical care to abused, neglected, injured and sick animals rescued by YHS. In too many shelters, homeless pets with poor medical or behavioral conditions are rejected as adoption candidates even though they are simply reacting to the trauma of an injury or the impact of a new circumstance or surroundings. Through STAR, YHS provides traumatized animals the time and treatment needed to become adoptable with the help and support of volunteers and foster families. • FELIX (Feral Education and Love Instead of X-termination) is a feral cat TNR (Trap/Neuter/Return) program. TNR is practiced in many communities across the U.S. and around the world. Feral cats are trapped, sterilized and returned under the care of a Colony Manager (a trained volunteer willing to feed, water, and care for the colony). TNR is the only program proven to reduce the number of feral cats while also serving as an effective neighborhood rodent abatement program; • Safety Net helps pets and their families stay together through difficult financial times, dislocations, hospitalizations, evictions, etc. Many families face crises that prompt the surrender of a beloved pet even though the crisis is likely to be temporary. Safety Net provides foster placement, veterinary help, counseling and other remedies to help prevent a pet from losing its home and family because of a temporary crisis. • The Big Fix provides low or no-cost spay/neuter services to pets of needy families. • The YHS Volunteer Program that includes fostering and animal behavior training prior to adoption. It’s your gifts to YHS that keep these lifesaving programs available to thousands of homeless pets in our community. YOU ensure our community continues to be the safest in the nation for pets. In fact, your financial support has already reduced shelter killing 96 percent over six years. Thank you for sustaining a No Kill environment for pets in need in 2015 and paving the future for even more animals to be saved this year and into the future!

Our Miracle Puppy, Trooper In March, we celebrated the adoption of a little puppy named Trooper. Left for dead in a dumpster, Trooper was found by a high schooler who was picking her younger brother and sister up from a park after school. She brought Trooper to the shelter and our Chief Veterinarian Dr. Volkman immediately brought the puppy back to the Clinic to be treated. Trooper was hypoglycemic (dangerously low blood sugar), starving, and blind. The Clinic diligently gave Trooper fluids every two hours and that evening Vet Tech Christine Campbell took him home with her and continued to treat Trooper. Having to work the next day, Christine finally had to go to bed at 1am but thought that she wouldn’t see this little puppy alive in the morning. He surprised her and made it through the night. But Clinic was still worried about this little guy. He was still blind and experienced seizures for two days. We thought even if he made it, Trooper would probably have ongoing neurological problems. But Trooper isn’t called “Trooper” for any old reason. He again pulled through until his seizures stopped and his eyesight even fully returned within that first week. Now it was time to help him gain weight. YHS administrative staff member, Kerry Whaley, Development Assistant, gladly decided to foster Trooper. With a calorie-rich diet he grew stronger by the day. By day Trooper came to work with Kerry and he became the Admin office dog for a couple weeks. He was a happy boy who loved playing fetch and napping in the sun. YHS Behaviorist Ariel Redd came to visit Trooper every so often and even taught Trooper how to “speak”. Within a few weeks, Trooper had more than doubled his weight (from just under two pounds to over 4 lbs.), was experiencing no neurological issues, and he was ready for his neuter surgery. Shortly after, a nice woman came to the shelter interested in adopting 8-year-old Dachshund Penny and decided Trooper should also go home with her to keep them company!

FOOD FED TO YHS PETS IN

Above: Trooper in the YHS clinic with Christine

13% hest rate in Arizona and one of

the highest in our country.

Mr. and Mrs. Gerald and Phyllis Mr. and Mrs. Scheuerman with Dr. Volkman Scheuerman have blessed Yavapai Humane Society over and again for years and recently enabled the purchase of a portable dental radiograph machine. It is no exaggeration to say that treating an animal’s oral health may save its life. Dental radiographs allow detailed examination of the teeth, tooth roots and the bone that surrounds the roots. Without this equipment, it is impossible to be sure if teeth that appeared healthy on the outside are not compromised on the inside. Periodontal disease occurs five times as often in pets as it does in people. This can cause great pain in animals, resulting in behavior issues due to their discomfort. Furthermore, gum disease deposits bacteria into the bloodstream and can cause heart problems and a host of other fatal health issues. The dental health of an animal is critical to their overall wellbeing. Biggie - Dental Patient Take Biggie the cat for example. When Biggie arrived at our shelter last summer he was a grumpy boy and wasn’t eating very well. We suspected something was wrong with his teeth but could not find the problem without dental x-rays. A local veterinarian was kind enough to give us a sizeable discount to take the x-rays. Though the procedure was still expensive, it allowed us to find a condition causing inflamed gums that is commonly life-threatening in cats. Biggie was in severe pain. After the veterinarian extracted all his teeth, including the root tip (which can be left behind and result in infection without the help of a radiograph), Biggie is a different cat. He no longer has an unfriendly disposition; he became a love bug. It did not take long to find Biggie’s adopter once he was feeling better and he shortly went home with a forever family. Thanks to the Scheuerman’s kindness and compassion, we will now be able to better diagnose, treat, and save animals like Biggie.

*Special Treatment and funds to care for medic Recovery, S.T.A.R., provides euthanized for in other al needs that an animal may be shelters. YHS believes Kill Ethic and will continu in its No e fund we go to when weto heal animals. This is the nee d to cov er costs treatments including me dicine, x-rays, medical of and reconstructive surger tes ies that our budget can ts, ’t support otherwise.

Gifts in Memory of

Gifts in Honor of In honor of Eleanor Mills

Gifts in Memory of Pets

Become a Compassion Ally today and enjoy: • Hassle-free monthly donations • Automatic donation from your credit card or checking account • The knowledge that your donation is put to work immediately • Complete statements provided for tax purposes • Quarterly newsletters on our progress • The ability to change or suspend your donation at any time • Access to tour YHS facilities and meet staff by appointment Become a Compassion Ally by checking the “For a monthly gift” box on the remittance envelope in this newsletter or by selecting a monthly donation at www.yavapaihumane.org/donate.

MONETARY VALUE OF VOLUNTEER $23.07 (as estimated by Independent Sector)

MAY 14 Embry-Riddle Aeronautical University 8:00 am - Noon 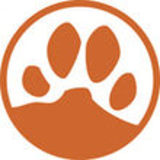