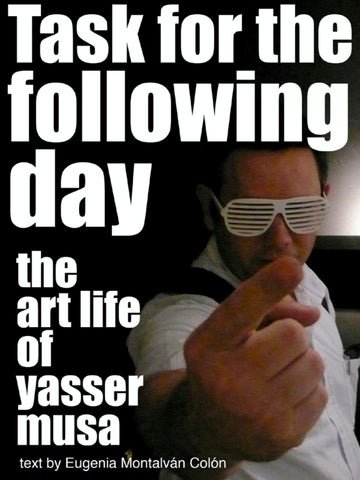 The tip of a wave bursts onto the dock that sustains only a mattress in the shape of a hammock, its four posts are mahogany and the bed is completely white, serene… The wave crashes and the salty water splashes unto the sheets, the sand disperses into elemental particles… The man found here lying down does not wake up… Still eyelashes, mouth closed, forehead up, transparent respiration… A little snail positions itself in the ear of the unconscious man and I continue observing the man who dreams. Surrounding are sky and the sea, totally monochromatic, incomprehensible.

The little snail carries a camera between his eyebrows, and the camera itself, is connected to a computer with a giant high definition plasma screen … The image that is reveals, despite the apparent peace that was previously described, was a burning sheet of paper. The snail gets so much closer to the screen that an ember reached it, which quickly converted into fire and, as a result, it could not continue filming.

I walk with Yasser Musa on Fifty-first Street. I watch his eyes under the abundant arch of his eyebrows and I find him tranquil, in how he is and how he lives, meanwhile day-to-day preoccupations corrode me, as we advance towards the sun, yes, that is what it seems like, as the light blinds us, but I say nothing, I prefer to keep myself in line, be quiet and concentrate on our steps.

We walk together because I accompany him to a little clandestine bookstore that I know here, in my city. And suddenly, unavoidably the desperation takes over, I confess to him an uneasiness that bothers me, and he with a two-word sentence, calms my anxiety. His closeness gave me confidence and later, with some books in our possession, I saw the sky with different eyes. I got to know Yasser through a poem, in which he reproduced a bill, which made in his presence, by the oldest waiter at La Flor de Santiago, an historic cafĂŠ, which has now disappeared.

The coins that he removed from his pocket then, transformed into our first encounter for an interview. His creed was sincere and continues to be sixteen years later.

He is compulsive and does not change.

Since he began as a painter he has maintained his finger fixed on the line, on the click and the enter. He studied Economics, surely on request, his father Said Musa was one of the leaders of the independence movement in Belize, and he, as a child, assimilated the rationale of that historic mission with pragmatism, knowing very well what he did. Later on, he decided to study Art History and Theory of Aesthetics with an analog camera stuck to the right eye and with the left he escaped from the university to lose himself in the light of the sky.

Yasser Musa is unique and repeats himself. He repeats himself constantly in the devotion to create, to become absorbed in the objects in his surroundings, than with people, despite being a humanitarian and a recalcitrant idealist; but his philosophy differentiates clearly from the other me (I) of Yasser, which is constituted by objects, which he has been able to create and by the objects that surround him.

Like obsession, for example, he observes the exact instant in which the small hand of his watch indicates the precise minute for the first tea, then, almost in silence, he gets up and he directs himself to smell the fresh herb from Taiwan which opens his eyes, and there is when, in its grandiose presence, the spoon, cup, remote control, and television reveal themselves to himâ&#x20AC;Ś

The Oolong ceremony transports Yasser to the earth, it takes him out of his dreams. The aroma of the green leaves land him in the here and the now, in what he believes. Even the reflection that comes to him from the sea from the dock at the foot of his house transfigures itself in the mirror before which he shaves each morning.

I do not know what became of his first paintings, when at the beginning of the nineties of the twentieth century he painted in the garage in his house. Truth is, I doubt that they would have outlived the installations with which he would later visit galleries and museums in various countries (Mexico, Cuba, The Dominican Republic, Costa Rica, Venezuela, The United States, Spain, Portugal, Guatemala or Taiwan…) showing first, recycled material converted into art, for examples sheets for offset printing made from emulsified zinc to bring to light dozens of anonymous faces of Belizean prisoners juxtaposed with portraits of colonial British governors, human skulls, and manatee bones exhibited like jewelry from Tiffany’s (in the ‘latest collection’ style) or later, the little doll submerged in condensed milk, surviving the thick sweetness, just to mention concrete pieces that come to mind.

My selective mind in the end, provokes that these images contain the image that I have of Yasser, reproduced and multiplied intentionally into the objects that he has decided to exhibit as his own creation, and so I see them after having followed them for a good while like a silent accomplice that launches safety shots into the air when itâ&#x20AC;&#x2122;s time to do so.

By ‘shots’ I’m referring to writings, declarations, and short theories, on his work and in the middle of the verbiage, the piece that stands out is the Banana Boy, this little ceramic figure in the form of “Baby Jesus” which carrying a plantain or banana, Yasser has photographed halfway around the world, posing here and there, and I also observed in his museum in a charming crystal urn. In its pilgrimage, upon passing through Guatemala, the Banana Boy met his fair skinned ‘little brother’ contradistinguished in the beginning, they joined so as to never be separated again, and they are still together with the same attitude of collectible figurines.

Yasser Musa is the idea, which he writes about himself daily. Is the constant beat of an ignited heart. Is the drop of nickel, which amalgamates a consumed intention. The harpoon anchored in the dictionary.

He is also a letter that arrived to Belize to be opened and closed an infinite amount of times, at a few steps from the Post Office building, on North Front Street in Belize City; a letter addressed to all and to no one, endless, of many readings and with a great suggestive power.

He owns the bastion of art in his country. It is called Image Factory, and he assumed the function of the great captain by his own right. Through this art space he plays the role of many persons the gallery owner, agent, curator, advisor, editor and founder of one of the first handicraft, book and music stores in the old capital. I list Yasser’s activities with two objectives, first to complete the profile of someone who, at forty has made a substantial contribution to the cultural life of a country in Central American/Caribbean and because when I met him he gave me as a gift, a book of his poetry, and from then until now, each time I’ve seen him, he has given me a gift, be it his artwork or that of another Belizean artist, a catalogue, a notebook, a postcard, a cd, a t-shirt… and that is amazing considering that each object represents a finished work, and I have met him a hundred times in the past fifteen years.

For this reason, naturally, I started talking about Yasser starting from the character who articulates his life in concrete objects that he has made and makes as a teacher, columnist, designer, propagator of contemporary literature, world changer etc. Black hair, white skin, Semitic features which evidence his Palestine ancestry, with a propensity to being overweight, Yasser Musa is a scrupulous doer, an artist with a great ability to make a reality whichever project he proposes, like planting hundreds of mahogany trees where green is abundant and beyond, since that was the principal purpose of one of his projects that precisely consisted in spreading the seeds of that tree in manila envelopes in many directions.

Always with feet and hands on the earth, turning the intangible into something lasting, like poetry and topics of reflection, almost everything, as much as he can revolutionize the synergy of a small nation, which he insists that we view as awake and productive.

He presents the impossible, as a task for the following day. In a giant chunk of ice, for example, he proposed to melt his rebellion, and he obtained it. He actually did it. In the water contained in the cold left impregnated the theory of the insolent avant-garde of making from silence a piece of art. Because in itself the act of evaporation does not produce noise, and in effect, paradoxically he made it heard.

I saw him exhibiting his ideas on the subject. He made outlines, showed diagrams, he was very enthusiastic considering the possibility of evaporation, and made others become enthusiastic. In the end, he succeeded with his objective being himself an adjacent observer to this work conceived from several gallons of water. Transparent, he bared himself in his paucity, well, Yasser, on the contrary to what we may think, is a man of few words.

Another day, deep in thought in one of his early - rising dawns he plunged his nose into a bowl of Fruit Loops cereal, and it was those miniscule grains of sugar which moved his soul one day of ‘x’ month of year ‘0’ when he uncovered himself as an artist. But that is a thing of the past, today he follows through with his daily routine with extreme neatness and with that English punctuality which he carries in his core inculcated by Joan, his mother, born in Manchester, candid and philanthropic.

Yasser takes his children Mishek and Mya to school, gives classes at St. Johnâ&#x20AC;&#x2122;s College, has lunch on Sundays with his parents, logs in to Facebook, listens to Leonard Cohen, watches the CNN news cast, and under light white linen sheets, he goes to bed at eight next his wife Pamela. The color, in his wide range of shades, is, within the abstraction of this as an object (read, tube of oil paint, jar of vinyl paint, chalk, line on asphalt), another of his leitmotifs, weakness in which he is privileged to be the most meticulous to choose the exact tone of white pastel to paint a wall in his gallery or liquid ebony to shine the floorboard of his house and make his shoes shine.

Yasser Musa appreciates really and conscientiously the faithfulness of the pen, the resistance of a blade used for shaving, the soft touch of a sheet of couchĂŠ paper over the fingertips, even more when it entails turning it into a page of a book in which will stay printed the work of another artist, which in his hands, almost automatically turns into an object of massive diffusion.

As an editor, Yasser Musa cradles the words, which are foreign, and turns them into public dominion, by this means, increasing the power that they have like animated objects, which is its essence.

And it is with words, ultimately, that he lives. With them, in their dimension of free souls he directed the political culture of Belize, and made thousands of notebooks so that children countrywide would give the words home and sustenance.

Yasser Musa insists and will insist always to turn a song, a sign, a written-on blackboard, an exhibit, a political pronouncement, an email, an electronic book the motive for us to maintain ourselves alert to who we are, and above any religious or political doctrine, to believe in ourselves.