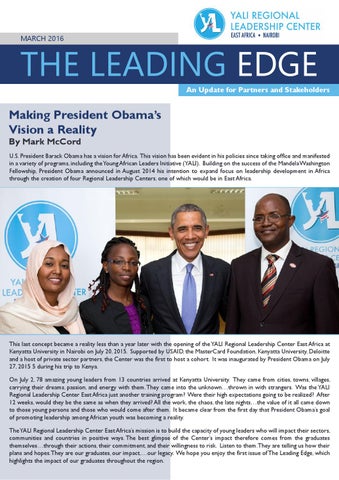 An Update for Partners and Stakeholders

U.S. President Barack Obama has a vision for Africa. This vision has been evident in his policies since taking office and manifested in a variety of programs, including the Young African Leaders Initiative (YALI). Building on the success of the Mandela Washington Fellowship, President Obama announced in August 2014 his intention to expand focus on leadership development in Africa through the creation of four Regional Leadership Centers, one of which would be in East Africa.

This last concept became a reality less than a year later with the opening of the YALI Regional Leadership Center East Africa at Kenyatta University in Nairobi on July 20, 2015. Supported by USAID, the MasterCard Foundation, Kenyatta University, Deloitte and a host of private sector partners, the Center was the first to host a cohort. It was inaugurated by President Obama on July 27, 2015 5 during his trip to Kenya. On July 2, 78 amazing young leaders from 13 countries arrived at Kenyatta University. They came from cities, towns, villages, carrying their dreams, passion, and energy with them. They came into the unknown…thrown in with strangers. Was the YALI Regional Leadership Center East Africa just another training program? Were their high expectations going to be realized? After 12 weeks, would they be the same as when they arrived? All the work, the chaos, the late nights…the value of it all came down to those young persons and those who would come after them. It became clear from the first day that President Obama’s goal of promoting leadership among African youth was becoming a reality. The YALI Regional Leadership Center East Africa’s mission is to build the capacity of young leaders who will impact their sectors, communities and countries in positive ways. The best glimpse of the Center’s impact therefore comes from the graduates themselves…through their actions, their commitment, and their willingness to risk. Listen to them.They are telling us how their plans and hopes. They are our graduates, our impact,…our legacy. We hope you enjoy the first issue of The Leading Edge, which highlights the impact of our graduates throughout the region.

The Power of the Spoken Word: A Cohort 2 Participant Sums Up His YALI Experience Cohort 2 alum Fortunatus Ekklessiah from Tanzania is one of the Center’s youngest graduates. At nineteen years of age, he has already launched his own website, created a mobile application to assist young people in exploring career choices, and become heavily involved in leadership and empowerment of other youth. Ideas that were designed and refined during his time at the Center. Fortune, as he likes to be called, delivered a powerful monologue during Cohort 2’s commencement ceremony that resonated with his peers, capturing their thoughts about the YALI Regional Leadership Center East Africa experience. He expressed his “disappointment” that his expectations upon arriving at the Center were low. He assumed most of the curriculum would be theory, but instead it ignited a passion within him that will last a lifetime. A portion of Fortune’s monologue is featured here, in this first issue of The Leading Edge, as an example of the impact the Center is having on the lives of youth leaders throughout the region.

Unexpected Outcomes from an Unlikely Pair

Mentorship with a Difference When Sylvia Kawalya, a Cohort 2 alumna from Uganda, began her journey with her mentor, Wilmot Gibson, a Principal Engagement Manager with Microsoft in the United States, she questioned how a 29-year-old Ugandan woman interested in beauty, feminism, and makeup, and a middle-aged American man working for a big corporation could relate to each other. Sylvia’s questions were soon answered when she began opening up about her dream to have a successful beauty company. As Wilmot and Sylvia became acquainted, they formalized objectives and goals for their mentoring relationship. As a new entrepreneur, Sylvia sought mentorship in personal development, business leadership, exposure to technology, and problem-solving. Because of Wilmot’s strong management experience and an ability to facilitate solutions to challenges faced in a variety of projects, over the course of their mentorship engagement Wilmot was able to offer the guidance that Sylvia desired. In fact, the Mentor-Mentee relationship and trust grew so much over their weekly sessions that Sylvia was inspired to change the direction and mission of her company, Paramour Cosmetics Ltd., from productfocused to more service-oriented. With this strategy overhaul, Sylvia was able to spend more time on what she was passionate about— providing jobs to girls, especially single mothers. This approach added great benefits to the company as well as the women who were impacted, utilizing their work ethic and creativity while at the same time providing them a steady source of income. The mentorship engagement between Sylvia and Wilmot is just one example of the types of meaningful and relevant bonds and growth in leadership skills that the YALI Regional Leadership Center East Africa Mentorship Program offers to participants. But the impact is not felt just by the Mentee; as Wilmot and the many other Mentors who have participated in the Program can attest, both Mentor and Mentee benefit equally, albeit different ways. For more information on the Mentorship Program, please email Farah at farah.eck@yalieastafrica.org.

ALUMNI SPOTLIGHT: MY YALI JOURNEY By Caren Wakoli (Kenya, Cohort 1) My experience going through the program was eye-opening, informative, and refreshing. The interaction with other young African leaders who are playing their part and trying to make a change in their communities was a motivating force. Listening to their stories and discovering that I am not alone in my leadership journey was affirming. The program’s construction really resonated with me, as it provided the opportunity not only to explore my own leadership skills, but also focus on civic leadership, about which I am very passionate. The highlight for me was the lesson on philanthropy, as I learned it is all about love…being able to manage one’s time, experience, skill and other resources. This discovery was profound because I believe in love and its ability to transform the African Continent, The connections I made at the Center were also amazing. For instance, our advisor during the group project phase was Lisa Kingston from Washington, D.C. Her experience and insight into our civic leadership challenge taught us so much and cemented concepts in me that I will utilize from now on. The most important connects I made were with my cohort-mates, many of whom impacted my leadership trajectory profoundly. As an example, Birkit Terefe from Ethiopia, expressed interest in my organization, The Emerging Leaders Foundation, and upon sharing the details with her, she was able to point out core challenges and suggest solutions. Birkit continues to support me, and we are holding each other accountable in our various undertakings. Because of this interaction, I began writing a book I hope to publish soon. The curriculum and facilitators both in the residential and e-learning sessions were amazing! The Center’s philosophy of “leadership by immersion” is a powerful mechanism through which I “learned by doing.” My time at the Center only reinforced my passion for leadership and resolve to be a changemaker in my community and country. And so, my leadership journey continues….

Impact that Matters Participants and Graduates Making a Difference There are those who may wonder, “How can youth really make an impact in East and Central Africa?” They have energy and enthusiasm, but what more can they offer to sectors and communities today to enrich the lives of citizens? The following snapshot is a brief overview of how a few of our participants and graduates are answering these questions…and they are just getting started!

The impact by alumni from countries not highlighted in this newsletter will be featured next quarter.

Simon Eroku, a graduate from Cohort 2, is spearheading outreach to the disabled community, bringing together young people with special needs to hear the YALI story. He is encouraging them to apply because, as he has stated â&#x20AC;&#x153;The Center is a place where you are treated as an equal from day one.â&#x20AC;?

Using business techniques and working with contacts he made at the Center, Ronald Hakiza, a Cohort 1 graduate, applied for and received a $10,000 startup grant from the United States Africa Development Fund (USADF) to launch is socially-conscious business UgaBus.

Ernest Tuape, a Cohort 1 graduate, gained an internship at Deloitte Uganda as a direct result of his involvement in the Center. In addition, he worked with other graduates to start a reading club for children as a way to positively impact their lives.

KENYA Cohort 1 graduate Lone Felix has continued to develop a business plan for the Village Hub (V-Hub) innovation concept that he developed while at the Center. V-Hubs are low cost facilities that will bring technological resources and innovative programs to youth in Kenyaâ&#x20AC;&#x2122;s rural areas. He is currently working with Nailab to develop the concept and pitch it to investors. He connected with Nailab through his involvement in the Center.

Katie Miano, a Cohort 2 graduate, started a movement called # Be Chanuad (Be Educated) to promote the education of rural girls in Kenya, as well as their protection from violence and prejudice. She has formed an NGO that is raising funds to help girls stay in school.

Cohort 3 participant Eric Omwanda and his Mathare Foundation provides disenfranchised youth in the Mathare neighborhood in Nairobi with photography skills that can serve as a source of income. He is currently in discussion with one of the Centerâ&#x20AC;&#x2122;s private sector partners to develop an e-commerce website to promote the work of the Foundationâ&#x20AC;&#x2122;s youth photographers.

DEMOCRATIC REPUBLIC OF CONGO Iongwa Mashangao, an alum of Cohort 2, sponsored a program for DRC youth on leadership and at the same time he and other YALI alums from DRC distributed 500 solar lighting kits from dLight.

Dolin Pululu, Cohort 1 graduate, is holding workshops on leadership in his village and mentoring young DRC men. His latest workshop on personal empowerment was attended by over 150 youth from his region.

REPUBLIC OF CONGO Vulcain Yengo, a Cohort 1 graduate, applied for a received a $10,000 startup grant from USADF to launch Minerve Distribution, which focuses on the purchase and distribution of goods to small companies, thus saving them time and money.

Asmeret Tesfahunegn, a graduate of Cohort 1, applied for a received a $10,000 startup grant from USADF to further develop her on-line accounting platform.

Team Ethiopia (graduates from cohorts 1 and 2 participants from cohort 3) planned and conducted a cultural festival in Addis Ababa where they provided leadership instruction and distributed food, clothes, and shoes to underprivileged families.

CENTRAL AFRICAN REPUBLIC Kpekere Bakiko Leonel Jocelin, a Cohort 2 graduate, started a peace campaign for CAR which is spreading throughout social media. His fellow graduates heavily supported this and the simple message of peace has been shared thousands of times on Facebook and retweeted to thousands on Twitter.

SOUTH SUDAN Rachel Alek, a graduate from Cohort 1 featured the YALI Regional Leadership Center in her womenâ&#x20AC;&#x2122;s magazine, Real Woman, which she publishes in South Sudan. This highlighted the Centerâ&#x20AC;&#x2122;s transformative approach and likely will increase applications from females within South Sudan exponentially.

Queen Makalele, a Cohort 2 graduate, has developed a concept for a bottled water factory in South Sudan, which will not only address the issue of affordable drinking water for citizens, but also employment for women.

SOMALIA Abdelwasic Jeelle of Cohort 3 is actively involved in promoting YALI among Somali youth, both by encouraging applications and sharing knowledge/curriculum. His involvement in the YALI network in Somalia is making a difference in the lives of young people and has led in part to a 200% increase in applications from Somalia to the YALI Regional Leadership Center East Africa. 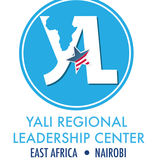