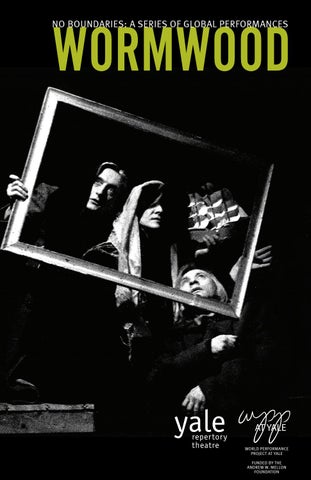 WORMWOOD NO BOUNDARIES: A SERIES OF GLOBAL PERFORMANCES

Presented in association with the Polish Cultural Institute in New York and the European Studies Council, with a Title VI National Resource Center grant from the US Department of Education.

WORMWOOD IS PERFORMED WITHOUT INTERMISSION.

PLEASE JOIN US AFTER THE PERFORMANCE FOR A TALK BACK WITH THE ARTISTS.

WELCOME On behalf of World Performance Project at Yale and Yale Repertory Theatre, we welcome you to No Boundaries: A Series of Global Performances. Our 2009–10 season offers an extraordinary spectrum of theatre, performance, and dance from around the globe, celebrating the diversity of voices and experiences worldwide. Wormwood, conceived and performed by the Polish theatre company Theatre of the Eighth Day (Teatr Ósmego Dnia), blurs the line between fantasy and reality in its portrayal of life in Poland under martial law. The company was founded in 1964 and faced some of the bleakest years of the Communist regime in Poland. Despite constant surveillance, censorship, and government oppression for the first twenty-five years of its existence, Theatre of the Eighth Day has flourished. Today, based in Poznań, they continue to create work that is both artistically and politically vital. We are honored to present this rare remounting of the landmark 1985 production that prompted the company’s exile from Poland. In January, New York solo performance legend Taylor Mac sings about love, mermaids, subway safety, and revolution in The Be(A)st of Taylor Mac, a wild—and wildly funny— gender-bending fusion of cabaret, politics, and stark raving fabulousness. And in March, we welcome Japanese multimedia performance group Baby-Q to present MESs, a work that explores gender and transformation in a world of constant loss and confusion. Yoko Higashino, the choreographer and performer of this piece, is one of Japan’s rising stars and the recipient of some of her country’s highest honors for her work. No Boundaries offers a variety of related programs, all free and open to the public. From workshops to lectures to post-show talk backs, we are committed to giving our audiences unique access to the artists—opportunities both to see the work on stage and to discuss the work with the creators themselves. A full schedule of related programs is available at yalerep.org/wpp. Thank you for joining us tonight for this performance of Wormwood. We look forward to sharing the entire No Boundaries season with you as we host some of the world’s most inventive and thought-provoking artists. Sincerely,

ABOUT THEATRE OF THE EIGHTH DAY (TEATR ÓSMEGO DNIA) Founded in 1964, Theatre of the Eighth Day quickly became the most famous and internationally recognized Polish underground theatre. Taking its name from a line by Polish poet Konstanty Ildefons Gałczyński, “On the seventh day, the Lord God rested, and on the eighth, He created theatre,” Theatre of the Eighth Day was originally formed as a student group that performed poetry and drama. After studying Jerzy Grotowski’s techniques and witnessing the civil unrest and student protests of 1968, their performance style became more physical and less verbal, and the company resolved to remain in dialogue with both the artistic and political movements in society. However, they always rejected the label “political theatre.” Theatre of the Eighth Day was subjected to years of censorship and government oppression as it continued to produce theatre behind the Iron Curtain. The Polish government eventually withdrew all subsidies and issued an official announcement that the group had disbanded. However, Theatre of the Eighth Day continued to produce work underground and was invited to the Edinburgh Festival to perform Wormwood in 1985. Only half of the company was granted visas by Polish authorities, and a new piece, Auto Da Fé, was devised and performed in its place. Auto Da Fé won the “Fringe First” prize, an achievement denounced by the Polish government because, according to them, the group “did not exist.” Theatre of the Eighth Day has created some of the most important works for the Polish stage: In One Breath (1971); Discounts for All (1977); Oh, How Nobly We Lived (1979); and Auto Da Fé (1985). Since the collapse of the Communist regime in Poland, the company, currently based in Poznań, continues to be recognized as a leader among Polish alternative theatres.

BIOGRAPHIES ADAM BOROWSKI (ACTOR) A Graduate of the Academy of Fine Arts in Poznań, Adam

JACEK CHMAJ (VISUAL DESIGN) joined Theatre of the Eighth Day in 1990 and designs scenery and lighting for the company. He is co-author of many of the company’s outdoor productions, including The Sabbath (1993), The Summit (1998), The Ark (2000), and The Time of Mothers (2006).

debut with the company in Inspection of the Scene of Crime. He has participated in the creation and performed in all of the company’s productions since, including Discounts for All (1977); Oh, How Nobly We Lived (1979); Wormwood (1985); No Man’s Land (1991); The Sabbath (1993); Porter’s Lodge (20003); and The Time of Mothers (2006). He was politically active in the 1970s and 80s and co-founded NSZZ Solidarity. Forced to emigrate, he stayed abroad with the Theatre beginning in 1986. A leading documentary filmmaker, he has photographed and filmed the company’s performances and other international activities.

EWA WÓJCIAK (ACTOR) joined Theatre of the Eighth Day in the 1970s and serves as its Director. She is an actress and the co-author of many plays, including Discounts for All; Oh, How Nobly We Lived; Wormwood; and No Man’s Land. She has written numerous program manifestos, as well as fundamental artistic and ideological credo of the Theatre. She was a keen supporter of Theatre of the Eighth Day “entering” the street and co-wrote its outdoor shows The Sabbath, The Summit, and The Ark. Her musical repertoire includes Requiem, in which she sings a series of poems by Anna Akhmatova. She has always been convinced that creating art is a form of global empathy and responsibility for the fate of others. She has performed with Theatre of the Eighth Day across Europe and around the world, has directed acting workshops, and remains active socially and politically.

SPECIAL THANKS: The Theatre of the Eighth Day’s appearance was made possible through the generous support of the Trust for Mutual Understanding, the Marshall of the Wielkopolska Region, and the Mayor of the City of Poznań.

THE WORLD PERFORMANCE PROJECT (WPP) promotes programs in performance studies across departments at Yale. An interdiscipline that draws from the arts, humanities, and human sciences (theater, drama, dance, visual arts, speech, linguistics, anthropology, sociology), performance studies defines as its objects cultural performances of all kinds, from theatrical presentations to rites of passage, and expands its frontiers anywhere significant performances are likely to take place, from Yorubaland to Disneyland. Working in partnership with departments and programs throughout the university, WPP presents performances, workshops, lectures, and symposia with artists and scholars working in a spectrum of performance forms. Through these events, WPP fosters teaching, research, and publication on performance-related topics. Originally established with funding provided by a Distinguished Achievement Award granted to Joseph Roach, Sterling Professor of Theater, by the Andrew W. Mellon Foundation, WPP is affiliated with the Yale College Theater Studies Program and the Whitney Humanities Center at Yale. For more information about the World Performance Project please visit:

tHE bE(a)St oF taylor Mac

wriTTen and performed By Taylor mac direcTed By david drake

“ taylor Mac SEdUcES yoU, brEakS yoUr HEart, patcHES it Up, and SEwS SEqUinS along tHE ScarS.” THe irisH Times pHoTo: drew geraci

By yoko HigasHino and TosHio kajiwara

“ FaScinating. a viSion oF apocalyptic darknESS pEnEtratEd by a pop SEnSibility.” asaHi newspaper