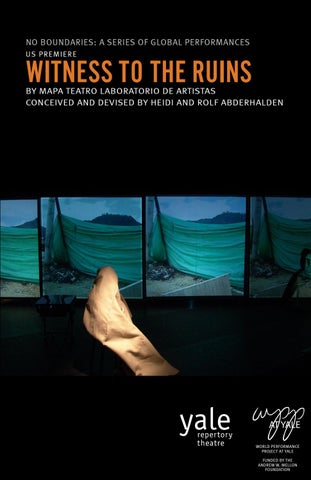 NO BOUNDARIES: A SERIES OF GLOBAL PERFORMANCES US Premiere

WITNESS to the RUINS

WITNESS TO THE RUINS

laboratory of artists Colombian artists Heidi, Elizabeth, and Rolf Abderhalden, children of a Swiss immigrant to Colombia, founded Mapa Teatro in 1984 after studying visual arts and theatre in France and Switzerland. The company settled in Bogotá in 1986. They gained success with their theatrical investigation of Samuel Beckett (De mortibus: Réquiem para Samuel Beckett, 1990); their performance of Heiner Müller’s Horacio (1994), created with the inmates of the Central Prison of Colombia; and a music theatre production, El león y la domadora (The Lion and the Lion-Tamer, 1997). In 1995 and 1996 they collaborated with the Indian company Purisai to create a production based on a text by Gabriel García Márquez. In August 2000, they inaugurated MAPA, a performing and visual arts space in Bogotá, conceived as a multidisciplinary laboratory of artists working in Colombia. Since then, they have been performing and touring three productions in South America and Europe: Ricardo III, a contemporary Colombian version of Shakespeare’s tragedy (2000); 4:48 Psychosis by Sarah Kane (2003); and Witness to the Ruins (2005).

About Witness to the Ruins Witness to the Ruins (Testigo de las ruinas) is based on the testimonies of fifteen longtime inhabitants of Santa-Inés El Cartucho, one of the most ancient and emblematic neighborhoods of downtown Bogotá, Colombia. El Cartucho fell victim to the violence of rampant arms and drug dealers in the late 1990s. Plans were made to raze the neighborhood to pave the way for a new public park, displacing thousands of its workingclass residents. From the time of El Cartucho’s demolition to the opening of the park, Mapa Teatro made five artistic actions (video-installations, performances, interactive events) within the community. This performance is a condensation of Mapa’s lengthy process in El Cartucho, an emotional testimony where members of El Cartucho tell their stories. Witness To The Ruins premiered in Vienna at the Wiener Festwochen in 2005. It then toured to the Prague Theatre Festival, the Hebbel Theatre in Berlin, and the Zürchertheater Spektakel in Zürich. It has also been performed in Bogotá (X Festival Iberoamericano de Teatro de Bogotá, 2006), Geneva (Festival de La Bâtie, 2007), Madrid (Festival Escena Contemporánea, 2008), Mexico City (Festival México en el Centro Histórico, 2008), and São Paulo (Mostra SESC-SP, 2008). This is the US premiere of Witness to the Ruins.

biographies Heidi Abderhalden (director/performer) is a co-founder of Mapa Teatro. Since 1981, she has pursued professional theatre training in Europe at the Theátre de Vide Poche in Lausanne, Switzerland, and in Paris at the Atelier-Théâtre Serge Martín, the International Theatre School Jacques Lecoq, and the Philippe Gualier Theatrical Formation Workshop. She has served as an actress, co-director, and producer with Mapa Teatro since 1985, as well as coordinator for theatrical training seminars and laboratories. Heidi has taught at the National University of Colombia, the University of the Rosary, the National School of Dramatic Art, and the Academy of Fine Arts in Bogotá. As the representative for South America, she attended the International Seminar of Scenic Arts organized by the Attakalari Foundation of India. She has translated Taba Taba by Bernard-Marie Koltès, To the Limit of Life (Al límite de la vida) by Gao Xing Yang, and History of Love (Historia de amor) by Jean-Luc Lagarce, as well as Shakespeare’s Richard II and Richard III.

Rolf Abderhalden (director/performer) is a co-founder of Mapa Teatro. He is a multidisciplinary artist, theatre director, and, since 1986, professor at the National University of Colombia, where he is the manager and director of the Interdisciplinary Master’s Degree in Theatre and Live Arts. As an undergraduate, he studied Art Therapy in Lausanne, Switzerland. He completed his post-graduate work in theatre at the International Theatre School Jacques Lecoq in Paris and studied scenography at the Laboratory of Movement Study at the Paris School for Fine Arts. He also concentrated in Theatrical Direction at the National Academy of Dramatic Arts in Rome. He participated in numerous projects at the Experimental Academy of Theatre in France, where he worked with directors Ariane Mnouchkine, Jerzy Grotowski, Anatoli Vassiliev, and Peter Brook. He has won recognition as a visual artist, including the Sixth Biennial Bogotá Arts Award; for his academic work, he was decorated with the National University of Colombia’s University Medal of Merit. The French government awarded him the title of Knight of the Order of Arts and Letters, and he was recently awarded a fellowship with Erasmus Mundus. He is a visiting professor at universities in Brussels, Paris, and Seville.

Carlos Benavides (performer/sound operator) is a Colombian musician, composer, and music producer and engineer (Berkeley ’98). He has worked with Mapa Teatro since 2001 on sound design, live sound staging, and composition, as well as with other music, theatre, and performance artists such as Marcellí Antúnez Roca (Spain), Michel Didym (France), and Richard Blair (UK). His own musical project, Verde3, has earned cult status in his native Bogotá.

biographies ANDREW Z. KELSEY (PERFORMER) is a first-year MFA candidate at Yale School of Drama. Recent credits include Hamlet, Jelly’s Last Jam (Yale School of Drama); Dead Letter Office (HERE Arts Center); and As Much As You Can (Celebration Theatre). Other credits include Good Boys and True (The Eugene O’Neill Theater Center), The Automata Pieta (Magic Theatre), Time on Fire (Magic Theatre/ Royal National Theatre), and The Rose Tattoo (American Conservatory Theater). Andrew is a frequent volunteer with the 52nd Street Project in New York and has performed in plays with them at Ensemble Studio Theatre and The Public Theater. He is a graduate of Amherst College.

Juana María Ramírez (performer) is a recycler and gatherer who lived a large part of her life in El Cartucho. She began collaborating with Mapa Teatro during their work on Witness to the Ruins.

José Ignacio Rincón (performer/lights operator) was born in Manizales, Colombia, and studied theatre at the School of Actors’ Training at the Teatro Libre of Bogotá from 1988 to 1991. He continued his studies at Carlos Lopez Bechardo National Conservatory of Music in Buenos Aires. After his work as an actor at Bogotá’s Teatro Libre, he began working with Mapa Teatro in 1994. Since then, he has participated in all of its productions as an actor, lighting technician, and producer.

Adriana Urrea (performer/dramaturg) is a philosopher and doctoral candidate at the Pontificia Universidad Javeriana in Bogotá, where she studies the contribution of Caribbean thought and literature to Western philosophy. Her theoretical work has been developed in the context of aesthetics, philosophy of art, political philosophy, and their relationship to literary philosophy. She is the Director of the Department of Philosophy at the Pontificia Universidad Javeriana, a professor in the master’s program of Theatre and Performing Arts at the National University of Colombia, and an advisor for cultural projects. She has worked on several of Mapa Teatro’s artistic projects since its inception.

Ximena Vargas (performer/video operator) is a television and film director specializing in documentary film. She has been a part of Mapa Teatro since 1995. She co-founded Shooting Cameras for Peace (Disparando Cámaras para la Paz), an organization which holds photography and video workshops for at-risk children. After working on television and independent cinematography projects, Ximena now dedicates herself to the artistic projects of Mapa Teatro, as well as the administrative coordination of the Interdisciplinary Master’s Degree in Theatre and Live Arts at the National University of Colombia.

For more information about the World Performance Project please visit

Want to save money on your next mailing? CT Presort is a complete letter shop and mailing service facility. We offer:

Inkjet Addressing • Postnet Barcoding Mailing List Maintenance • Fulﬁllment Call us today to find out how we can save you money on postage! CT PRESORT, L.L.C. 87A State Street, North Haven 203.239.3199 • ctpresort@aol.com

Witness to the Ruins

WITNESS TO THE RUINS by Mapa Teatro. Yale Repertory Theatre and World Performance Project at Yale. March 26 to 28, 2009.

Witness to the Ruins

WITNESS TO THE RUINS by Mapa Teatro. Yale Repertory Theatre and World Performance Project at Yale. March 26 to 28, 2009.