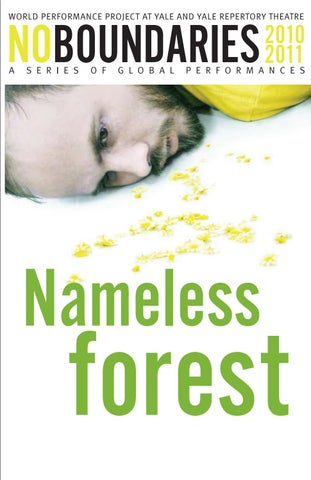 Nameless forest A PREVIEW PERFORMANCE OF

Choreographed and directed by

Nameless forest will be performed without an intermission. Each performance will be followed by a talk back with the artists.

Support for Nameless forest Lead commissioning support for Nameless forest has been provided by The Kitchen, Yerba Buena Center for the Arts, and Clarice Smith Performing Arts Center at University of Maryland. Nameless forest has been developed in part during two creative residencies at Arizona State University and during a creative residency provided by Maggie Allesee National Center for Choreography at The Florida State University. Nameless forest has received generous support from The New England Foundation for the Artsâ&#x20AC;&#x2122;s National Dance Project, with lead funding from the Doris Duke Charitable Foundation and additional funding from the Andrew W. Mellon Foundation and the Boeing Company Charitable Trust; The MAP Fund, a program of Creative Capital supported by the Doris Duke Charitable Foundation and the Rockefeller Foundation; the National Endowment for the Arts; and The Asian Art Theaterâ&#x20AC;&#x2122;s Project Development Initiative funded by The Office for Hub City of Asian Culture in the Korean Ministry of Culture, Sports, and Tourism. The participation of Sungmyung Chun is made possible with support from Korea Foundation. Nameless forest is generously supported by the following individuals: Wolhee Choe, Lili Chopra, Paulette Demers, Mark Giglio, Alan Gilbert, Mike Glier, Roberta Graff, Henry Hom, Michelle Lippitt, Carleen Sheehan, Melissa and Robert Soros, and Christina Yang.

BIOS KACIE CHANG (PERFORMER) is glad to join the cast of Nameless forest. She has worked with Dean Moss on his reliably enjoyable performance challenges for over fifteen years. In this, her sixth Gametophyte project, she has also served as rehearsal director. Kacie has taught dance master classes at Elm City Dance Collective, Dancing Dialogue, and Florida State University. Her choreography has been presented in New York by Dances for Wave Hill, Next Steps, and BAX. As a performer, she has danced with Risa Jaroslow, Poppo and the Gogo Boys, Nai-Ni Chen, Wendy Blum, the Butoh Rockettes, and Richard Move. Kacie received her BFA in dance from Florida State University in 1991. SUNGMYUNG CHUN (LEAD COLLABORATOR) received his BFA and MFA from Suwon University in South Korea. Chun’s seventh solo exhibition, Swallowing the Shadow, was recently held at TouchArt Gallery in Heyri Art Valley, Paju, Korea. Chun participated in ARCO 2007, Art Rotterdam 2007, Busan Biennale 2006, and Gwangju Biennale 2000, as well as group exhibitions worldwide in Italy, France, Israel, Spain, and China. He is the recipient of the grand prize at the Kim Sejoonj Young Scupltor Awards and the third prize at the 2007 Micro-Narratives, October Salon, Belgrade, Serbia. Chun’s works are in the collections of Musée d’art contemporain de Montréal, Canada, and Gyeonggido Museum of Art, Ansan, South Korea. He lectures in the college of fine arts at Kyunghee University and Chugye University for the Arts. A book of Swallowing the Shadow was published by TouchArt in 2008. ERIC CONROE (PERFORMER) is a Brooklyn-based dancer, choreographer, and poet, educated in dance and literature at Bennington College in Vermont. Recently, he has presented his choreographic work at St. Mark’s Church, the Brooklyn Arts Exchange, and through Movement Research and AUNTS. His writing has appeared in The American Drivel Review, danceinsider.com, and elsewhere. This is his first project with Dean, and he is honored to be a part of this experience. GANDALF GAVÁN (NEON ELEMENTS) works in diverse media including blown and slumped glass and creates drawings and large-scale installations that explore contemporary social themes. Gaván received his BFA from Bard College in 1998 and his MFA from Columbia University in 2005, where he teaches printmaking and sculpture. He received the 2005 Joan Mitchell Foundation Grant and a 2006 Mortimer Frank Traveling Fellowship. Gaván has exhibited at museums and galleries around the world, including in Spain, Germany, Austria, Peru, and Mexico. Solo exhibitions have taken place at Museo de Arte Contemporaneo, Oaxaca; N2 Galeria, Barcelona; Larissa Goldston Gallery, New York; P.S. 1, New York; Bertrand and Gruner, Geneva; and Cornell Fine Arts Museum at Rollins College, Winter Park, Florida.

BIOS AARON HODGES (PERFORMER) grew up in an Army family that moved about in the southern states. He is a 2006 Circle in the Square Theatre School graduate. He has performed, written, or sound designed for various original works, with friends, at The Chocolate Factory, chashama, Ontological-Hysteric Theater, The Public Theater, The Players Theatre, The Brick Theater, and Brooklyn Arts Exchange. His band Holy Spirits records and performs in NYC and around the US. PEDRO JIMÉNEZ (PERFORMER) is a child of the 90s. He likes farms, flowers, freedom, and honesty. His expression has been increasingly driven by some earlier expressions remembered, such as neighborhood sports; running; playground games; manhunt; water balloon fights; fishing; the Mickey Mouse Club; Michael Jackson; Dr. Martin Luther King, Jr.; getting arrested and put in jail at age 16 for using his school Metro Card on a non-school day; aggressive inline skating; and from his mother, father, aunt, cousin, sisters, brothers, friends, the everyday, and you. Pedro is grateful to god for life, for learning, and for all who live with their hearts, with love—you are an incredible inspiration to me. MICHAEL KAMBER (AUDIO DIARY RECORDING/DOCUMENTARY IMAGES) is an awardwinning freelance photojournalist and journalist whose photos have been published in nearly every major news magazine in the United States and Europe. He has covered conflicts in Iraq, Liberia, the Sudan, Cote d’Ivoire, Somalia, Haiti, Chad, and numerous other countries. Most recently, in the winter of 2010–2011, he worked as a contract photojournalist and writer in Afghanistan. MAPP INTERNATIONAL PRODUCTIONS (CO-PRODUCER) is a non-profit performing arts producing organization that makes it possible for contemporary artists to create high quality performances and bring those projects to the public. MAPP nurtures artists through all stages of their creative process, places their performances on stages worldwide, and devises innovative ways to share artists’ work with diverse communities. MAPP embraces a global network of multidirectional cultural exchange working with artists and arts organizers who reside in many parts of the world. mappinternational.org DJ McDONALD (PERFORMER) has been the creator, playwright, director, and choreographer of three full-length music theatre works, over a dozen book musicals, a half dozen straight plays, and two operas; he served as co-producer, co-director, and choreographer for 15 original dinner theatre revues, four seasons of professional cabaret, and two seasons of stand-up comedy. He headed his own modern dance and theatre company for 15 years and was one of seven American choreographers

chosen by the American Dance Festival to tour France. He has also performed with Andrew DeGroat, Jeanie Hutchins, Yoshiko Chuma, Pina Bausch, David Dorfman, and Mikhail Baryshnikov (White Oak). He has written for the Village Voice, and now creates arts and culture commentary on the blogs City of Glass and Culturebot. DEAN MOSS (CHOREOGRAPHER/DIRECTOR) is a director, choreographer, and media artist. Through his company Gametophyte, Inc., he creates video works and multidisciplinary collaborations that have been exhibited and performed internationally. These works have received various grants, fellowships, and awards, including The New York Dance and Performance “Bessie” Award, The Foundation for Contemporary Arts Artist Grant, New York Foundation for the Arts Artist Fellowships in both Choreography and Multidisciplinary Works, and residencies at the Maggie Allesee National Center for Choreography. Moss was the Curator of Dance and Performance at The Kitchen from 1999–2004 and served as a Curatorial Advisor until 2009. He taught for a year as a Guest Professor at the Tokyo National University of Fine Arts and Music (2003–04) and two years (2007–09) as a Visiting Lecturer in the Department of Visual and Environmental Studies at Harvard University. He is currently teaching a course in Transcultural Performance Collaboration in the Department of Theater Studies at Yale. SARI NORDMAN (PERFORMER) has presented her choreography in the U.S. and in Finland since 1996. Most recently, her work has been seen at the Bronx Academy of Arts and Dance!, Brooklyn Arts Exchange, Movement Research at the Judson Church, and Columbia University. Dancing with choreographers Douglas Dunn, Dean Moss, Susan Rethorst, and Melinda Ring has influenced her own dance making. This spring she will present her new work at the Kalevala Marathon at Columbia University, DraftWork at Danspace Project, and Movement Research at the Judson Church in collaboration with Pedro Jiménez. She is a recent recipient of American Scandinavian Society’s cultural grant. She holds an MFA in modern dance from NYU’s Tisch School of the Arts. ROXANA RAMSEUR (COSTUME DESIGNER), a Henry Hewes nominated Local USA829 Costume Designer and Craftsman, has been designing and building costumes for theatre and dance since 1996. Collaborators include Young Jean Lee, Brian Brooks, Sara Juli, Messenger Theater Company, Blackmoon Theatre Company. Design assistant credits include Cunning Little Vixen (NY Philharmonic, June ’11), Spamalot, and Shrek The Musical. Millinery and costume crafts credits span from Broadway to the Santa Fe and Metropolitan Operas. Trained in fashion design, Roxana continues work in that industry as a milliner (Albertus Swanepoel) and designer of accessories, soft packaging, and crafts projects for periodicals. roxanaramseur.tumblr.com

THE WORLD PERFORMANCE PROJECT (WPP) promotes research in performance studies across departments at Yale. An interdiscipline that draws from the arts, humanities, and human sciences (theater, drama, dance, visual arts, speech, linguistics, anthropology, sociology), performance studies defines as its objects cultural performances of all kinds, from theatrical presentations to rites of passage, and expands its frontiers anywhere significant performances are likely to take place, from Yorubaland to Disneyland. Working in partnership with departments and programs throughout the university, WPP presents performances, workshops, lectures, and symposia with artists and scholars working in a spectrum of performance forms. Through these events, WPP fosters teaching, research, and publication on performance-related topics. Originally established with funding provided by a Distinguished Achievement Award granted to Joseph Roach, Sterling Professor of Theater, by the Andrew W. Mellon Foundation, WPP is affiliated with the Yale College Theater Studies Program and the Whitney Humanities Center at Yale. For more information about the World Performance Project please visit:

the arts discretionary fund in yale college in cooperation with dance studies, theater studies, the world performance project, and alliance for dance at yale