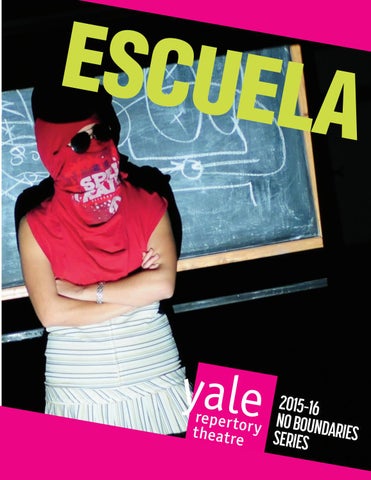 ABOUT YALE REPERTORY THEATRE YALE REPERTORY THEATRE, the internationally celebrated professional theatre in residence at Yale School of Drama, has championed new work since 1966, producing well over 100 premieres—including two Pulitzer Prize winners and four other nominated finalists. Twelve Yale Rep productions have advanced to Broadway, garnering more than 40 Tony Award nominations and eight Tony Awards. Yale Rep is also the recipient of the Tony Award for Outstanding Regional Theatre. Established in 2008, Yale’s Binger Center for New Theatre has distinguished itself as one of the nation’s most robust and innovative new play programs. To date, the Binger Center has supported the work of more than 50 commissioned artists and underwritten the world premieres and subsequent productions of 21 new American plays and musicals at Yale Rep and theatres across the country. Yale Rep’s No Boundaries series explores the frontiers of theatrical invention through cutting-edge and thought-provoking performance from around the world. No Boundaries has introduced Yale Rep audiences to an astonishing array of performances—including theatre, dance, music, and multimedia—from the Netherlands, the Czech Republic, Poland, Peru, Colombia, Spain, Germany, Japan, Israel, Georgia, East Africa, West Africa, and right here in the U.S.

escuela Written and Directed by

Escuela is generously supported by:

About Escuela Escuela was commissioned and produced by the Santiago a Mil International Theatre Festival for their season about the 1973 Chilean coup d’état. On September 11, 1973, general Augusto Pinochet led a coup against Socialist president Salvador Allende and his political coalition, the Popular Unity Party. For 17 years, the dictatorship caused thousands of deaths and cruelly persecuted opponents. On October 5, 1988, Pinochet held a referendum so that the Chilean people would permit him to govern for eight more years under a semi-democratic regime; however, he lost the election, and the country chose a new democratic president. The dictatorship officially ended on March 11, 1990, when Patricio Aylwin assumed the presidency. Escuela is set in 1988, as Chileans prepare to participate in Pinochet’s referendum. Many think that it’s a great opportunity to end the dictatorship. They believe that the civic protests are overwhelming the dictator, and that it’s possible to defeat him at the polls. Other Chileans, the young people of Escuela, think that Pinochet has called for the elections to avoid a total defeat that could jeopardize the economic model he imposed during the dictatorship. They also think that the dictator wants to retain a position of power in order to guarantee impunity for the military officials who violated human rights. History proved them right, because Pinochet continued in his position as commander-in-chief of the armed forces until March of 1998. His political and economic legacies remain unquestioned after more than twenty years of democracy.

Guillermo Calderón (Director, Playwright) is a director and playwright whose plays include Neva, Diciembre, Clase, Villa, Discurso, Quake, School, and Kiss. Calderón’s productions have toured extensively through South America and Europe. Festival stops include Buenos Aires International Theatre Festival, Chekhov Festival (Russia), Edinburgh International Festival, Festival d’Automne (France), Santiago a Mil (Chile), Seoul Performing Arts Festival (Korea), TEATERFORMEN Festival (Germany), Wiener Festwochen (Austria), World Theatre Festival (Belgium), The Public Theater´s Under the Radar Festival, and RADAR L.A. The English language version of Neva had its US Premiere at The Public Theater in 2013; a subsequent production toured to South Coast Rep, Center Theatre Group, and La Jolla Playhouse. He has been commissioned by the Düsseldorfer Schauspielhaus (Germany), the Royal Court Theatre (England), and The Public Theater. His co-written screenplay Violeta Went to Heaven won the World Cinema Jury Prize for Drama at the 2012 Sundance Film Festival. He also co-wrote The Club, winner of the Silver Bear at the Berlinale in 2015. Villa and Speech were published in Theater magazine (Yale and Duke). He is currently working on a commission from The Public Theater.