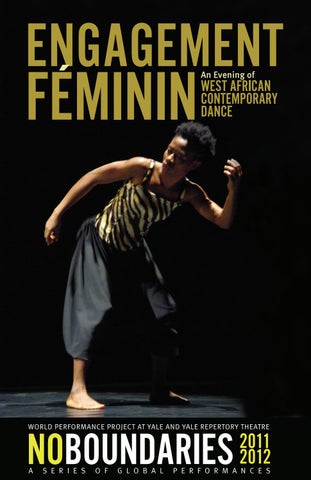 FUNDED IN PART BY THE ROOT BOY SLIM FUND. THE RUNNING TIME FOR ECOUTE MA MUSIQUE AND DANS UN S’Y METTRE, WHICH WILL BE PERFORMED CONSECUTIVELY, IS APPROXIMATELY 60 MINUTES INCLUDING A TRANSITION. EACH PERFORMANCE WILL BE FOLLOWED BY A TALK BACK WITH THE ARTISTS.

WELCOME On behalf of World Performance Project at Yale and Yale Repertory Theatre, we are pleased to welcome you to No Boundaries: A Series of Global Performances. Now in its fifth season, No Boundaries has introduced New Haven audiences to artists from the Netherlands, the Czech Republic, Japan, Colombia, Poland, Peru, Kenya, Spain, and South Korea, as well as from the United States. Our 2011–12 season offers an extraordinary spectrum of theatre, performance, and dance from around the globe, celebrating the diversity of voices and experiences in today’s world. This season’s performances are all truly revolutionary: challenging the way art is made, traditional forms, and political regimes. Tonight’s presentation, Engagement Féminin, brings the work of Art’ Dév/Compagnie Auguste-Bienvenue to the United States for the first time. For over a decade, choreographers Auguste Ouédraogo and Bienvenue Bazié have contributed to the development of contemporary dance in West Africa. In 2009, they began the initiative Engagement Féminin to revolutionize dance in their region: they created a series of workshops to train women in contemporary dance and choreography. Very few female artists create dance pieces in West Africa, but Engagement Féminin is training and inspiring a new generation of dancers, choreographers, and audience members on the African continent. The two pieces performed tonight—Ecoute Ma Musique and Dans Un S’Y Mettre—were created during the first session of Engagement Féminin. The female dancers worked with Ouédraogo and Bazié on dances inspired by their daily lives. In February, renowned concert pianist Eteri Andjaparidze and MacArthur Foundation Fellow Jennifer Tipton join forces for a revolution of form in Spectral Scriabin. In 1915, Russian composer Alexander Scriabin staged what was most likely the first multimedia concert in history; he designed a clavier à luminère to project colors onto the stage as it was played. Andjaparidze and Tipton have taken Scriabin’s idea of relating color to musical pitch to create an extravaganza of lush music and spectacular light. Our No Boundaries season’s final offering will be presented in March. Chile’s Teatro en el Blanco will perform Neva, written and directed by Guillermo Calderón. A politically-charged and haunting evening of theatre, Neva takes place in a St. Petersburg rehearsal room in the winter of 1905. Anton Chekhov’s widow—Olga Knipper—and two other actors await the rest of the cast—while unseen striking works are gunned down in the streets by the Tsarist regime. Calderón’s directing and writing savagely examines the relationship between performance and history in this tightly-crafted ensemble work. No Boundaries offers a variety of related programs, all free and open to the public. From workshops to symposia to post-show talk backs, we are committed to giving our audiences unique access to the artists—opportunities both to see the work on stage and to discuss the work with the creators themselves. A full schedule of these programs is available at yalerep.org/noboundaries. Thank you for joining us tonight at this performance of Engagement Féminin. We look forward to sharing the entire No Boundaries season with you as we host some of the world’s most inventive and thought-provoking artists. Sincerely,

ENGAGEMENT FÉMININ: AN EVENING OF WEST AFRICAN CONTEMPORARY DANCE FROM THE COMPANY Dans Un S’Y Mettre (Put Yourself Out There)—the culmination of choreographers Auguste Ouédraogo and Bienvenue Bazié’s desire to share their experiences of the creative process of choreography with female artists and to ignite within these artists a lifelong passion for dance—reflects a journey central to life, and all that life demands of us. The main ambition is to involve the viewer in a search for a way of life that speaks to our deepest aspirations. In order to succeed, we have to put ourselves out there; that is, engage in actions that will lead us to the outcome we want. In our quest for balance, among the discussion, laughter, struggle, togetherness, fluidity, and vitality, we embrace the type of daily living that forces us to meet life’s challenges head-on to reach what we desire. —TRANSLATED BY SARAH KRASNOW

BIOS AUGUSTE OUÉDRAOGO (CHOREOGRAPHER) joined the troupe Le Bourgeon in 1993 and received training in dance, theatre, storytelling, and music. He has participated in dance workshops directed by choreographers Christophe Chelleux, Robert Seyfried, Salia Sanou, Seydou Boro, Opiyo Okach, Xavier Lot, Angelin Preljocaj, Benjamin Lamarche, and Claude Brumachon, among others. In 2000, with Wilfried Souly and Olivier Tarpaga, he created the Company Tã, which became the Art’ Dév/Compagnie Auguste-Bienvenue in 2007. Auguste Ouédraogo has created many choreographic pieces and also participated in the creation of many other dance performances. In 2008, he launched, with Bienvenue Bazié, Engagement Féminin. This project seeks to introduce West African girls and women to contemporary dance through workshops, residencies, and performances. BIENVENUE BAZIÉ (CHOREOGRAPHER) joined the troupe Le Bourgeon in 1993 and trained in dance, theatre, storytelling, and music. He participated in many workshops under the supervision of choreographers Salia Sanou, Seydou Boro, Claude Brumachon, Benjamin Lamarche, Mattéo Molles, Xavier Lot, and Eric Mezino, among others. Bienvenue Bazié is the Co-Artistic Director for Art’ Dév/Compagnie Auguste-Bienvenue and Wa Tid Saou. As a dancer and choreographer with Auguste Ouédraogo, he creates and develops all of the company’s work. From 2002 to 2005, he worked with the Company Kongo Ba Teria and has been working with Xavier Lot’s company ULAL DTO. In 2008, he performed in the show Etrange étranger by Pambe Dance Company. ABIGAIL SENA ATSUGAH (DANCER) holds a BFA in Dance and Theatre from the University of Ghana (Legon, Accra, Ghana). She first experienced contemporary dance in 2007 when she took part in the first professional contemporary dance workshop organized by the Choreographic Development Centre La Termitière of Ouagadougou. She was a dance Teaching Assistant from 2008 to 2009. She participated in the first Engagement Féminin project in 2009, and during the workshop, she was selected to develop and perform the solo Ecoute Ma Musique and in the quartet Dans Un S’Y Mettre. She hopes to become a lecturer in contemporary dance.

BIOS SALAMATA KOBRÉ (DANCER) started her artistic career in 2006 touring as a dancer with singing acts and appearing in videos and various cultural events. Since September 2009, she has been a part of the project Yeleen Don, launched by the Choreographic Development Centre La Termitière, which in 2010, became a three-year training program called Je Danse Donc Je Suis. In 2010, she toured in Montpellier (France) with the show Entre Chiens et Loups choreographed by Anne-Marie Porras and Salia Sanou. She is also a dancer for Art’ Dév/Compagnie Auguste-Bienvenue's show Dans Un S’Y Mettre. MARIAM PALÉ (DANCER) is a multi-talented artist. Her radiant, gentle, and fascinating voice has been featured at festivals in Africa and Europe. As an actress, she first trained in theatre with artists Hubert Otto, Moussa Sanou, and Fargass Assande, before working with the troupe Badénya. In 2005, she applied her theatrical experience to the screen by acting in TV shows and film. She participated in several dance workshops taught by renowned choreographers like Angelin Preljocaj, Krisztina Dechâtel, Salia Sanou, Seydou Boro, Ousséni Sako, Hind Benali, Auguste Ouédraogo, and Bienvenue Bazié, among others. In 2009, she took part in the first Engagement Féminin project and is now a dancer in the quartet Dans Un S’Y Mettre by Art’ Dév/Compagnie Auguste-Bienvenue. SALIMATA WOLOGEM (DANCER) As a child, Salimata Wologem learned to practice traditional dance and to sing in Burkinabe local languages. She was also very active within her community and danced to the songs and music played by griots during traditional ceremonies. In 2006, she discovered contemporary dance thanks to Séraphin Zekoua from the Foundation Négritudes/Mémoires Vivantes in Bobo-Dioulasso. Since then, she has been developing an interest in contemporary dance and has participated in several workshops. In January 2009, she participated in the first Engagement Féminin project and is currently a dancer for Dans Un S’Y Mettre by Art’ Dév/Compagnie AugusteBienvenue

THE WORLD PERFORMANCE PROJECT (WPP) promotes research in performance studies across departments at Yale. An interdiscipline that draws from the arts, humanities, and human sciences (theater, drama, dance, visual arts, speech, linguistics, anthropology, sociology), performance studies defines as its objects cultural performances of all kinds, from theatrical presentations to rites of passage, and expands its frontiers anywhere significant performances are likely to take place, from Yorubaland to Disneyland. Working in partnership with departments and programs throughout the university, WPP presents performances, workshops, lectures, and symposia with artists and scholars working in a spectrum of performance forms. Through these events, WPP fosters teaching, research, and publication on performance-related topics. Originally established with funding provided by a Distinguished Achievement Award granted to Joseph Roach, Sterling Professor of Theater, by the Andrew W. Mellon Foundation, WPP is affiliated with the Yale College Theater Studies Program and the Whitney Humanities Center at Yale.

For more information about the World Performance Project please visit

a doctor in spite of himself

THINK JAM: Improvisation Across Disciplines An improvised jam session with dancers, musicians, poets, and scholars, in which disciplines collide and co-mingle.

...and is in dialogue with ENGAGEMENT FÉMININ: An Evening of West African Contemporary Dance Created and performed by Art’ Dév/Compagnie Auguste-Bienvenue November 3-5 at 8 PM at the Iseman Theater, 1156 Chapel Street