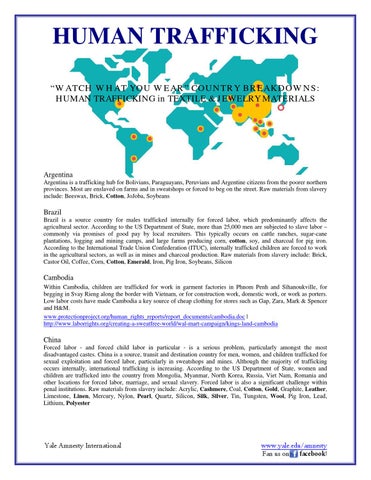 Argentina Argentina is a trafficking hub for Bolivians, Paraguayans, Peruvians and Argentine citizens from the poorer northern provinces. Most are enslaved on farms and in sweatshops or forced to beg on the street. Raw materials from slavery include: Beeswax, Brick, Cotton, JoJoba, Soybeans

Brazil Brazil is a source country for males trafficked internally for forced labor, which predominantly affects the agricultural sector. According to the US Department of State, more than 25,000 men are subjected to slave labor – commonly via promises of good pay by local recruiters. This typically occurs on cattle ranches, sugar-cane plantations, logging and mining camps, and large farms producing corn, cotton, soy, and charcoal for pig iron. According to the International Trade Union Confederation (ITUC), internally trafficked children are forced to work in the agricultural sectors, as well as in mines and charcoal production. Raw materials from slavery include: Brick, Castor Oil, Coffee, Corn, Cotton, Emerald, Iron, Pig Iron, Soybeans, Silicon

Cambodia Within Cambodia, children are trafficked for work in garment factories in Phnom Penh and Sihanoukville, for begging in Svay Rieng along the border with Vietnam, or for construction work, domestic work, or work as porters. Low labor costs have made Cambodia a key source of cheap clothing for stores such as Gap, Zara, Mark & Spencer and H&M. www.protectionproject.org/human_rights_reports/report_documents/cambodia.doc | http://www.laborrights.org/creating-a-sweatfree-world/wal-mart-campaign/kings-land-cambodia

China Forced labor - and forced child labor in particular - is a serious problem, particularly amongst the most disadvantaged castes. China is a source, transit and destination country for men, women, and children trafficked for sexual exploitation and forced labor, particularly in sweatshops and mines. Although the majority of trafficking occurs internally, international trafficking is increasing. According to the US Department of State, women and children are trafficked into the country from Mongolia, Myanmar, North Korea, Russia, Viet Nam, Romania and other locations for forced labor, marriage, and sexual slavery. Forced labor is also a significant challenge within penal institutions. Raw materials from slavery include: Acrylic, Cashmere, Coal, Cotton, Gold, Graphite, Leather, Limestone, Linen, Mercury, Nylon, Pearl, Quartz, Silicon, Silk, Silver, Tin, Tungsten, Wool, Pig Iron, Lead, Lithium, Polyester

Dominican Republic In a series of investigations of the working conditions of a factory in DR, the Worker Rights Consortium found that Hanesbrand was in violation of Dominican and International laws. http://www.laborrights.org/creating-a-sweatfree-world/wal-mart-campaign/tos-dominicana-dr

Honduras In Honduras, girls as young as 13 were found sewing clothing for TV talk-show host Kathie Lee Gifford's apparel line sold at Wal-Mart. The girls worked from 7:30am to 9:00pm, Monday through Friday, and because of forced overtime to meet rush orders, the children were not permitted to attend night school, where from 6:00 pm to 10:00 pm they could have studied to complete their grammar school educations. http://www.dosomething.org/tipsandtools/background-sweatshops http://www.laborrights.org/creating-a-sweatfree-world/sweatshops/factory-profiles/jerzees-de-honduras

India Millions from India's lower castes are enslaved in brick kilns, rice mills, agriculture, sweatshops, and embroidery factories. Hundreds of thousands more are trafficked to the Middle East, United States and Europe to work as domestic servants and low-skilled laborers. India is a source, destination, and transit country for victims trafficked for forced labor and sexual exploitation. According to the Committee on Economic, Social and Cultural Rights, women and children from particular castes are particularly vulnerable. In the introduction to its 2008 Draft Protocol on Trafficked or Migrant Labor, the Ministry of Labor noted â&#x20AC;&#x153;an increasing trend of migration and trafficking of children for labor in different parts of the country.â&#x20AC;? Anti-Slavery International notes that boys are also trafficked from Bihar in West Bengal and Nepal for bonded labor in embroidery workshops in New Delhi. At the international level, there is evidence of labor trafficking amongst the significant numbers of Indians who migrate willingly to the Middle East, Europe and the US to work as domestic servants and low-skilled laborers (for example through debt bondage). Raw materials from slavery include: Beeswax, Brick, Carbon, Coal, Cotton, Graphite, Leather, Limestone, Linen GAP, Walmart, C&A, H&M warn their Indian suppliers against textile mills that involve child & bondedlabor | http://articles.economictimes.indiatimes.com/2011-11-16/news/30405697_1_child-labor-labor-shortagelabor-issues | http://human-rights.unglobalcompact.org/case_studies/humantrafficking/trafficking/allegations_of_child_trafficking_within_the_supply_chain.html | http://www.traffickingproject.org/2010/08/indias-garment-challenge.html

Indonesia Indonesia is a major source of domestic and international human trafficking victims. Domestically, women and children are trafficked internally for sexual exploitation and forced labor in domestic service, agriculture, mining, fishing, and in the cottage industries. Internationally, Indonesians are trafficked to Malaysia, Japan, Saudi Arabia, Iraq and Singapore, among other countries, for economic and sexual exploitation. http://www.laborrights.org/creating-a-sweatfree-world/sweatshops/factory-profiles/pt-mulia-knitting-factory | http://www.laborrights.org/creating-a-sweatfree-world/sweatshops/factory-profiles/pt-busana-indah-global

Jordan A 2010 Report revealed that Nygard, Dillards, J.C. Penney and Wal-Mart clothing was being sewn at the International British Garments factory, where 1,200 guest workers from Sri Lanka, Bangladesh and India-75 percent of whom are young women-have been trafficked to Jordan, stripped of their passports and held under conditions of indentured servitude. http://www.globallaborrights.org/reports?id=0035 http://www.laborrights.org/creating-a-sweatfree-world/wal-mart-campaign/petra-apparel-jordan

HUMAN TRAFFICKING Malaysia Malaysia enslaves close to four million documented and undocumented foreigners. Recruited to work in hotels and restaurants, once they arrive most are forced into Malaysia's thriving sex trade or onto plantations and construction sites. Raw materials from slavery include: Latex, Palm Oil, Rubber, Ruby, Wood/Timber, Mother of Pearl

Mexico Mexico is a major source, transit point and destination for human trafficking victims. The majority of victims of human trafficking are subject to sexual exploitation, although trafficking for forced labor is also frequently recorded, particularly in factories or the agriculture sector. The majority originate from poor rural regions and are trafficked to urban, border and tourist areas. Central Americans, especially Guatemalans, have been subjected to agricultural servitude and labor exploitation in southern Mexico. Mexican men, women, and boys are also trafficked into the US for forced labor, particularly in the agricultural sector.

Pakistan The country is a significant source, transit and destination country for domestic and international trafficking. In particular, it is reported to be a destination country for women and children from Bangladesh, India, Myanmar, Afghanistan, Sri Lanka and Nepal for commercial sexual exploitation and forced labor. Women and children from rural areas are also trafficked to urban areas for commercial sexual exploitation and forced labor. In some cases families sell their children into servitude or believe they are marrying their children off or sending them for legitimate employment. Raw materials from slavery include: Leather, Coal, Brick, Cotton

Russia Russia is a source, transit and destination country for human trafficking victims. The ILO reports that supplying victims for labor is the most predominant form of trafficking. Moscow is a major destination for men and women trafficked within Russia, and from former Soviet countries, for purposes of sexual exploitation and forced labor. Large numbers of men, particularly from Belarus, Kyrgyzstan, Tajikistan and Ukraine are trafficked into Russia for forced labor in the construction, textile and food industries.

Turkey The largest industrial sector in Turkey is textiles and clothing, which accounts for one-third of industrial employment; it faces stiff competition in international markets with the end of the global quota system. In documented cases, H&M & Levis workers have contracted silicosis in Turkish sweatshop. http://www.laborrights.org/creating-a-sweatfree-world/sweatshops/factory-profiles/2080

USA The US has reported cases of women who have been trafficked to the US to work in the garment industry in debt bondage. Raw materials from slavery include: Copper, Corn, Gold, Nylon, Soybeans, Limestone, Propane http://www.scpr.org/blogs/multiamerican/2011/04/06/7314/the-gripping-tale-of-a-garment-industry-slave/

Uzbekistan Slavery in Uzbekistan centers around cotton. During the harvest the government forces school- age children, along with adults, to pick cotton. Russian traffickers also target Uzbeks for the Russian agricultural and construction industries. Raw materials from slavery include: Cotton, Silk

Vietnam Vietnam is primarily a source country for women and children trafficked for commercial sexual exploitation and forced labor, mainly overseas but also internally. According to the US Department of State, destination countries include China, Cambodia, Thailand, Malaysia and Taiwan. The US Department of State reports an element of complicity amongst some government-licensed labor brokers. 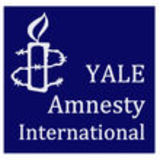 "Watch What You Wear" Country Breakdown: Human Trafficking in Your Clothing

Descriptions of the 21 countries with the worst human trafficking patterns in the garment industry.

"Watch What You Wear" Country Breakdown: Human Trafficking in Your Clothing

Descriptions of the 21 countries with the worst human trafficking patterns in the garment industry.