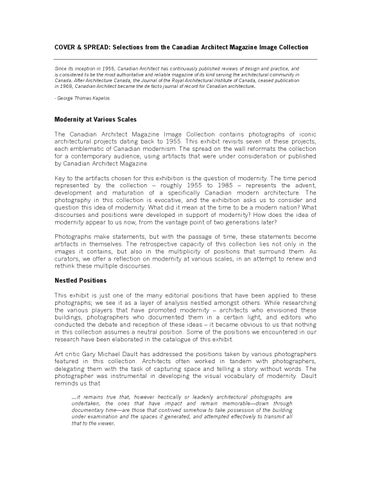 Modernity at Various Scales The Canadian Architect Magazine Image Collection contains photographs of iconic architectural projects dating back to 1955. This exhibit revisits seven of these projects, each emblematic of Canadian modernism. The spread on the wall reformats the collection for a contemporary audience, using artifacts that were under consideration or published by Canadian Architect Magazine. Key to the artifacts chosen for this exhibition is the question of modernity. The time period represented by the collection – roughly 1955 to 1985 – represents the advent, development and maturation of a specifically Canadian modern architecture. The photography in this collection is evocative, and the exhibition asks us to consider and question this idea of modernity. What did it mean at the time to be a modern nation? What discourses and positions were developed in support of modernity? How does the idea of modernity appear to us now, from the vantage point of two generations later? Photographs make statements, but with the passage of time, these statements become artifacts in themselves. The retrospective capacity of this collection lies not only in the images it contains, but also in the multiplicity of positions that surround them. As curators, we offer a reflection on modernity at various scales, in an attempt to renew and rethink these multiple discourses. Nestled Positions This exhibit is just one of the many editorial positions that have been applied to these photographs; we see it as a layer of analysis nestled amongst others. While researching the various players that have promoted modernity – architects who envisioned these buildings, photographers who documented them in a certain light, and editors who conducted the debate and reception of these ideas – it became obvious to us that nothing in this collection assumes a neutral position. Some of the positions we encountered in our research have been elaborated in the catalogue of this exhibit. Art critic Gary Michael Dault has addressed the positions taken by various photographers featured in this collection. Architects often worked in tandem with photographers, delegating them with the task of capturing space and telling a story without words. The photographer was instrumental in developing the visual vocabulary of modernity. Dault reminds us that …it remains true that, however hectically or leadenly architectural photographs are undertaken, the ones that have impact and remain memorable—down through documentary time—are those that contrived somehow to take possession of the building under examination and the spaces it generated, and attempted effectively to transmit all that to the viewer.

Beyond the architectural projects and the photographic images, the exhibition also considers the way in which the publication of the magazine contributed to the development of modernity. Canadian Architect emerged at a time when modernism was beginning to gain a foothold, and it quickly established its readership of architects, planners and educators. Readers of the magazine, viewers of these photographs were both practitioners, who were already attuned to ideas of the modern in architecture, and the public that was slowly taking in this new paradigm. Editors of the magazine thus had a significant influence on the ways in which modernity was received and accepted in Canada, regularly featuring and discussing the nation’s most progressive projects, firms and ideas. We could say that the magazine played an important role in creating Canada as a modern nation, and the artifacts presented here serve as a documentary record of this birthing process. Three themes came to the forefront as we assessed the repository of images at the Special Collections at Ryerson University Library &amp; Archives: • • •

These three themes form the undercurrent of the exhibition, which features archival photographs, as well as the covers and spreads that once determined the reception of each of these seven iconic projects. Our findings are supported and supplemented in the exhibition catalogue, with essays by three recent editors of Canadian Architect Magazine – Marco Polo (1997-2007), Ian Chodikoff (2003-2012) and Elsa Lam (2012-present). David Campbell and Prachi Khandekar Curators