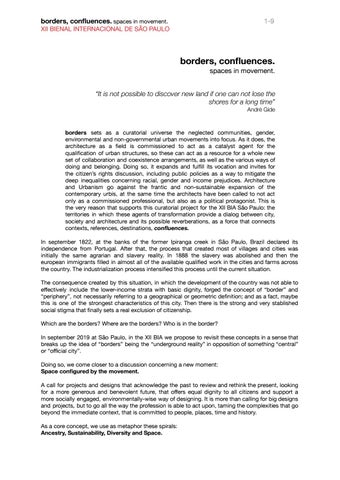 borders sets  as  a  curatorial  universe  the  neglected  communities,  gender,  environmental  and non-governmental urban movements into focus. As it does, the  architecture  as  a  ﬁeld  is  commissioned  to  act  as  a  catalyst  agent  for  the  qualiﬁcation  of  urban  structures,  so  these  can  act  as  a  resource  for  a  whole  new  set  of  collaboration  and  coexistence  arrangements, as well as the various ways of  doing  and  belonging.  Doing  so,  it  expands  and  fulﬁll  its  vocation  and  invites  for  the  citizen’s  rights  discussion,  including  public  policies  as  a  way  to  mitigate  the  deep  inequalities  concerning  racial,  gender  and  income  prejudices.  Architecture  and  Urbanism  go  against  the  frantic  and  non-sustainable  expansion  of  the  contemporary  urbis,  at  the  same  time  the  architects  have  been  called  to  not  act  only  as  a  commissioned  professional,  but  also  as  a  political  protagonist.  This  is  the  very  reason  that  supports  this  curatorial  project  for  the  XII BIA São Paulo: the  territories  in  which  these  agents  of  transformation  provide  a  dialog  between  city,  society  and  architecture  and  its  possible  reverberations,  as  a  force  that  connects  contexts, references, destinations, conﬂuences.    In  september  1822,  at  the  banks  of  the  former  Ipiranga  creek  in  São  Paulo,  Brazil  declared  its  independence  from  Portugal.  After  that,  the  process  that  created  most  of  villages  and  cities  was  initially  the  same  agrarian  and  slavery  reality.  In  1888  the  slavery  was  abolished  and  then  the  european  immigrants  ﬁlled  in  almost  all  of  the  available  qualiﬁed  work  in the cities and farms across  the country. The industrialization process intensiﬁed this process until the current situation.    The  consequence  created  by  this  situation,  in  which  the development of the country was not able to  eﬀectively  include  the  lower-income  strata  with  basic  dignity,  forged  the  concept  of  “border”  and  “periphery”,  not  necessarily  referring  to  a  geographical  or geometric deﬁnition; and as a fact, maybe  this  is  one  of  the  strongest  characteristics  of  this  city.  Then  there  is  the  strong  and  very  stablished  social stigma that ﬁnally sets a real exclusion of citizenship.    Which are the borders? Where are the borders? Who is in the border?    In  september  2019  at  São  Paulo,  in  the  XII  BIA  we  propose  to  revisit these concepts in a sense that  breaks  up  the  idea  of  “borders”  being  the  “underground reality” in opposition of something “central”  or “oﬃcial city”.    Doing so, we come closer to a discussion concerning a new moment:  Space conﬁgured by the movement.    A  call  for  projects  and  designs  that  acknowledge  the  past  to  review and rethink the present, looking  for  a  more  generous  and  benevolent  future,  that  oﬀers  equal  dignity  to  all  citizens  and  support  a  more  socially  engaged,  environmentally-wise  way of designing. It is more than calling for big designs  and  projects,  but to go all the way the profession is able to act upon, taming the complexities that go  beyond the immediate context, that is committed to people, places, time and history.    As a core concept, we use as metaphor these spirals:  Ancestry, Sustainability, Diversity and Space.

The  place  in  which  to  develop  the  event,  as  well  as  the  projects  and  actions  involved,  will  act  as  vectors  that,  starting  from  a  micro  scale,  may  create  active  forces  to  unleash  the  feelings  and  thoughts  that  will  operate  to  expand,  vary  and  conquest  its  purpose,  eventually  growing to a bigger  scale.  It  is  important  that  this  choice  is  not  made  separately  or  individually,  but as a part of a bigger  purpose  and  strategy,  breaking  up  the  former  deﬁnition  of  “border/center”  as  merely  a  geographic  condition.    The  place  that  has  identity  but  no  deﬁnition:  a  no-place  condition.  The  chosen  place,  Glicério,  is  located  at  the  very  center  of  the  city  and  is inhabited from the XVI century, but established since the  XVIII  century’s  city  expansion.  Originally  a  meadow  inhabited  by  slaves  and  lower-income  strata,  Baixada  do  Glicério  is  not  oﬁcially  a  neighborhood;  its  region  is  fragmented  by  other  administrative  areas,  so  the region became very complex as social and urban dynamics; as a result, these elements  are  an  example  of  historical  processes  of  segregation  so  commonly  observed  in  most  geopolitical  metropolises.    As  a  further  development,  the  chosen  building  for  the  event  is  located  in  Avenida  do  Estado,  an  artery that connects downtown to the southeast region. The relatively old brick building was a vehicle  shopping  center  and  is  relatively  forgotten  but  in  relatively  good  condition. For its history, it is suited  for  a virtually unlimited array of activities and installations, inviting and inspiring artists, architects and  citizens to engage with history, the public space and its larger context.

The challenge set for this XII BIA is the antithesis of itself as curatorial idea; it is to include  relationships and spaces that are able to create an important movement of conﬂuence and broad  dialog with society, beyond architect’s own protected ﬁeld.

Commissioned artists:  Alberto Simon - (São Paulo, Brazil) - Work: Tamanho_M  Frontal meeting with the idea of average, in between, middle course, point of balance, visible in  the scale and residential façades architecture of traditional neighborhoods of the middle classes of  São Paulo, like Mooca, Cambuci, Ipiranga, Santana, Jardim São Paulo Saúde and others; it os  meaningful that these neighborhoods do not qualify as “noble” because the represented  architecture is not the result of an renowned author.

Pilar Quinteros - (Lima, Chile) - Obra: site project desenvolvido para a XII BIA  A sensible and insightful articulation of complex questions related to stories and dynamics  inherent of the places the artist intervene. Conceived mostly to public spaces, concerns are tested  and communicated through a direct action to engage the passers-by into questions of social,  economic and political processes that connects to site history and other urban dynamics.

General concept and coordination of content and narratives, to be presented  before and during the whole period of the  event; dialog with all involved and partners  to clarify any aspects of the event’s  objective; follow-up and deﬁnitions for  visual design, exposition design and  publishing design; texts for publishing and  all related.

Follow-up and management of execution schedules for the event; cost and suppliers  management (subject of approval) for all  services concerning the production of the  event; logistics for events prior, during and  after the event; build-up and deconstruction  of the exposition.

Graphic concept and pieces production for  all classic and digital media of the event;  publishing concept and design. 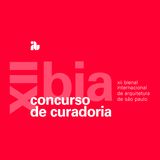