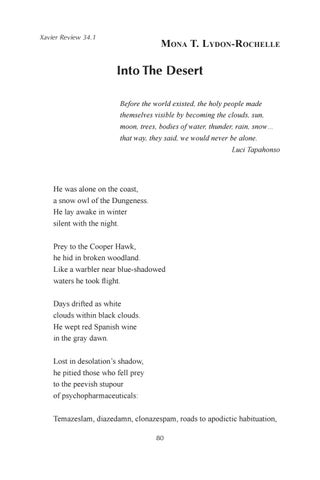 Into The Desert Before the world existed, the holy people made themselves visible by becoming the clouds, sun, moon, trees, bodies of water, thunder, rain, snowâ&amp;#x20AC;Ś that way, they said, we would never be alone. Luci Tapahonso

He was alone on the coast, a snow owl of the Dungeness. He lay awake in winter silent with the night. Prey to the Cooper Hawk, he hid in broken woodland. Like a warbler near blue-shadowed waters he took flight. Days drifted as white clouds within black clouds. He wept red Spanish wine in the gray dawn. Lost in desolationâ&amp;#x20AC;&amp;#x2122;s shadow, he pitied those who fell prey to the peevish stupour of psychopharmaceuticals: Temazeslam, diazedamn, clonazespam, roads to apodictic habituation, 80 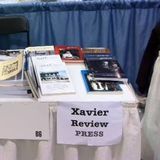