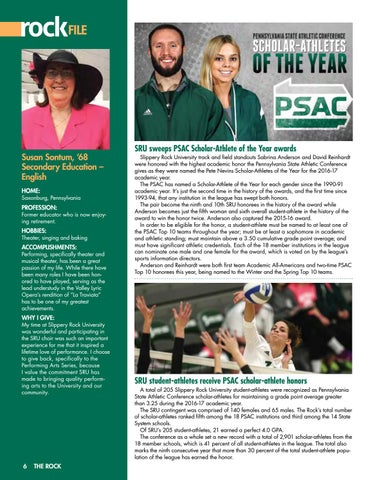 Performing, specifically theater and musical theater, has been a great passion of my life. While there have been many roles I have been honored to have played, serving as the lead understudy in the Valley Lyric Opera’s rendition of “La Traviata” has to be one of my greatest achievements.

Slippery Rock University track and field standouts Sabrina Anderson and David Reinhardt were honored with the highest academic honor the Pennsylvania State Athletic Conference gives as they were named the Pete Nevins Scholar-Athletes of the Year for the 2016-17 academic year. The PSAC has named a Scholar-Athlete of the Year for each gender since the 1990-91 academic year. It’s just the second time in the history of the awards, and the first time since 1993-94, that any institution in the league has swept both honors. The pair become the ninth and 10th SRU honorees in the history of the award while Anderson becomes just the fifth woman and sixth overall student-athlete in the history of the award to win the honor twice. Anderson also captured the 2015-16 award. In order to be eligible for the honor, a student-athlete must be named to at least one of the PSAC Top 10 teams throughout the year; must be at least a sophomore in academic and athletic standing; must maintain above a 3.50 cumulative grade point average; and must have significant athletic credentials. Each of the 18 member institutions in the league can nominate one male and one female for the award, which is voted on by the league’s sports information directors. Anderson and Reinhardt were both first team Academic All-Americans and two-time PSAC Top 10 honorees this year, being named to the Winter and the Spring Top 10 teams.

My time at Slippery Rock University was wonderful and participating in the SRU choir was such an important experience for me that it inspired a lifetime love of performance. I choose to give back, specifically to the Performing Arts Series, because I value the commitment SRU has made to bringing quality performing arts to the University and our community.

THE ROCK ROCK 66 THE