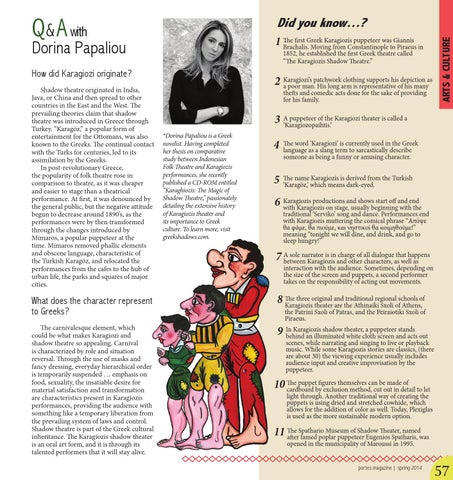 first Greek Karagiozis puppeteer was Giannis 1 The Brachalis. Moving from Constantinople to Piraeus in

How did Karagiozi originate? Shadow theatre originated in India, Java, or China and then spread to other countries in the East and the West. The prevailing theories claim that shadow theatre was introduced in Greece through Turkey. “Karagöz,” a popular form of entertainment for the Ottomans, was also known to the Greeks. The continual contact with the Turks for centuries, led to its assimilation by the Greeks. In post-revolutionary Greece, the popularity of folk theatre rose in comparison to theatre, as it was cheaper and easier to stage than a theatrical performance. At first, it was denounced by the general public, but the negative attitude begun to decrease around 1890’s, as the performances were by then transformed through the changes introduced by Mimaros, a popular puppeteer at the time. Mimaros removed phallic elements and obscene language, characteristic of the Turkish Karagöz, and relocated the performances from the cafes to the hub of urban life, the parks and squares of major cities.

What does the character represent to Greeks? The carnivalesque element, which could be what makes Karagiozi and shadow theatre so appealing. Carnival is characterized by role and situation reversal. Through the use of masks and fancy dressing, everyday hierarchical order is temporarily suspended … emphasis on food, sexuality, the insatiable desire for material satisfaction and transformation are characteristics present in Karagiozis performances, providing the audience with something like a temporary liberation from the prevailing system of laws and control. Shadow theatre is part of the Greek cultural inheritance. The Karagiozis shadow theater is an oral art form, and it is through its talented performers that it will stay alive.

patchwork clothing supports his depiction as 2 Karagiozi’s a poor man. His long arm is representative of his many thefts and comedic acts done for the sake of providing for his family.

puppeteer of the Karagiozi theater is called a 3 A‘Karagiozopaihtis. ’ *Dorina Papaliou is a Greek novelist. Having completed her thesis on comparative study between Indonesian Folk Theatre and Karagiozis performances, she recently published a CD-ROM entitled “Karaghiozis: The Magic of Shadow Theatre,” passionately detailing the extensive history of Karagiozis theater and its importance to Greek culture. To learn more, visit greekshadows.com.

The word ‘Karagiozi’ is currently used in the Greek language as a slang term to sarcastically describe someone as being a funny or amusing character.

name Karagiozis is derived from the Turkish 5 The ‘Karagöz,’ which means dark-eyed. productions and shows start off and end 6 Karagiozis with Karagiozis on stage, usually beginning with the

sole narrator is in charge of all dialogue that happens 7 Abetween Karagiozis and other characters, as well as

interaction with the audience. Sometimes, depending on the size of the screen and puppets, a second performer takes on the responsibility of acting out movements.

three original and traditional regional schools of 8 The Karagiozis theater are the Athinaiki Sxoli of Athens,

scenes, while narrating and singing to live or playback music. While some Karagiozis stories are classics, (there are about 30) the viewing experience usually includes audience input and creative improvisation by the puppeteer.

puppet figures themselves can be made of 10 The cardboard by exclusion method, cut out in detail to let

light through. Another traditional way of creating the puppets is using dried and stretched cowhide, which allows for the addition of color as well. Today, Plexiglas is used as the more sustainable modern option.

Spathario Museum of Shadow Theater, named 11 The after famed poplar puppeteer Eugenios Spatharis, was opened in the municipality of Maroussi in 1995. 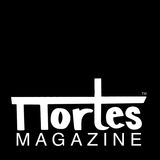