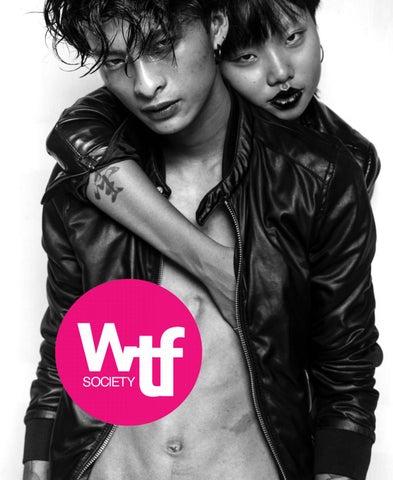 What Is... THE WTF SOCIETY?

A creative take on capturing the fabulous within a curated array of products, places, and elite individuals that are not only intriguing, but pulsing with energy and captivating the attention of the world today. From local to global, WTF intends to conceptualize the art of discovery, each one hosting a personal identity, and connecting each unique find with you.

MONKEY LAMPS Made of resin and finished by hand, the Monkey Lamps depict a monkey in three different positions, exploring the environment while clutching a LED bulb: a new and alternative way of conceiving lighting. Monkeys are very reminiscent of men: that’s why I have often proposed them in my sculptural works. In the version for SELETTI, they sneak into our house: “I like to think they are stealing those bulbs, which are not at all to our service but they have removed some chandeliers in an undisturbed house. My production is inspired by the relationships between man and nature. I aim for a simple result but also ironic. I prefer the concepts that make people think with irony.”

A mischievous glance, charming smile, burst of laughter... the Rose Pompon woman exudes joie de vivre. A fresh and playful olfactory creation, Rose Pompon is a bold composition inspired by new horizonsâ&amp;#x20AC;Ś Sparkling notes of blackcurrant and raspberry mingle with pink pepper and a hint of peony to reveal the duo of rose extracts composing Rose Pompon. An addictive freshness with a bold and modern twist. ANNICKGOUTAL.COM

MAKEUP ARTIST With a career spanning more than two decades, makeup artist Frances Hathaway has used her professionalism and creativity to climb to the height of the beauty industry. “It is important to have the right attitude, work hard and love what you do. Treat each job as if it is the most important and do it to the best of your ability. Because to the client it is the most important job,” says Hathaway. Being the first freelance makeup artist to represent MAC, she relocated to London and her unique style lead her to work with some of the greatest photographers throughout Europe including Mario Testino. Wanting to expand even further and being a visionary of her time, Hathaway collaborated to create some of fashion’s most iconic moments while exclusively using only MAC products – something that was highly unheard of at the time. She later returned to New York after working with many renowned personalities like Princess Diana. With a firmly established name in the fashion world, she has worked on various campaigns and shows for designers and industry giants like Estee Lauder, Clinique, and Sephora, as well as various celebrities. Her signature style of precision spans from polished all the way to avant-garde, and her attitude of always approaching the next project with the same passion as her first keeps her creative vision as fresh as ever.

n/naka is a sophisticated dining experience where Chef Niki Nakayama ensures you have a relaxing and amazing Japanese culinary dish. He believes in the dining method of kaiseki, which is the art form that the food represents the earth. Every vegetable is from their organic garden, created by Farmscape Gardens. The food is meant to be en-joyed in the moment, eating a meal that was inspired by the earth it came from. N-NAKA.COM

“THE WORLD IS GOING MAD… CREATE YOUR VISION STICK TO IT, LIVE THE LIFE YOU WANT TO LIVE”

Robin Hernandez, AKA Lil B, is a French tattoo artist who grew up in Bordeaux, France. At the age of 18 he moved to California with his best friend, residing there for 5 years and soon after beginning to tattoo. He moved back to France 2 years later to start a new journey which consisted of on-the-road tattooing and worldwide pop-up shops. His style: Black and grey realistic tattoos, very fine line details in opposition to bulky graphic elements like bold lines to make things stand out and more interesting. Nature is what influences him the most. LILBTATTOO.NET

In the age of innovation and the new modern era, itâ&amp;#x20AC;&amp;#x2122;s no surprise that Rolls Royce has taken a different approach to their newest editions. Stepping away from the brand image of always being affiliated with chauffeurs and class, the Rolls Royce Black Badge Editions bring a sense of edge with their sleek look. Their names, Ghost and Wraith are a perfect representation of what the cars have to offer â&amp;#x20AC;&amp;#x201C; darkened chrome, paint as black as possible, wheels with special carbon composite, and the iconic Spirit of Ecstasy hood ornaments draped in black. The cars also come with improved performance courtesy of the upgraded 6.6L V12s, and the interiors hold bolder colours to contrast the darkness of the exterior. ROLLS-ROYCEMOTORCARS.COM

Pope the Barber, a California native, has used her passion and raw talent to become an inspirational international barber as well as a platform educator. Creative LA culture along with Pope the Barberâ&amp;#x20AC;&amp;#x2122;s neotraditional skills and learned world craft have inspired places such as the Vatican Barbershop in Santa Ana, California. In just 10 years, Pope the Barber has become of the of the most well known female barbers worldwide and has spread her passion and dexterity through educating. @POPETHEBARBER

ONION STUDIO’S BEAR GARAGE Thailand’s design studio, Onion, has created an aluminum and carbon fiber sheet “Bear Garage”. The Bear Garage houses over 70 rare Bearbricks collectables, containing 51 1000% Bearbricks, two 400% Bearbricks, and a large KAWS sculpture. The exhibition also has a designed L-shaped cabinet that takes up two of the garages walls to display the collectables. Each Bearbrick, large and miniature version, is placed under an illuminated LED spotlight and on a raised platform. The sloping surface is designed to trick the eye into thinking that the bears decrease in size along the wall. The garage features a long window that enables the Bearbricks display to be viewed from the living room. The “Bear Garage” is open with large angled walkways and is a dream for diehard Bearbrick collectors. ONION.CO.TH

The Supreme and Louis Vuitton highly anticipated collaboration made its debut on the Paris runway in mid-January for FW17. The collection varies from accessories like keychains, wallets, scarves, hats, sneakers, and skateboards to clothing like denim baseball shirts, box logo t-shirts, and camo jackets. Also included in the collection will be trunks, bags, backpacks, and fanny packs. Although the collection wonâ&amp;#x20AC;&amp;#x2122;t be available until July, there are a select few items that can be pre-ordered right now. LOUISVUITTON.COM

TOMAAS, a photographer his vibrant, dramatic yet su surreal imagery. Still keepin combines the atmosphere, unique photographic experi own story. Born in Germany, for 18 years, TOMAAS now to create a bold and unforge vision. His images have bee publications such as Vogue Qvest, and Twill. His work York galleries as well. TOMAAS.COM

and visionary image maker, uses ubtle style to create cinematic and ng his images realistic, TOMAAS environment, and subject with a ience to have each image tell its , and having lived in New York City w lives in Paris where he continues ettable impression with his precise en a part of numerous international e Italia, W Magazine, Marie Claire, has been exhibited in many New

Mask House, conceptualized by the story of a man who lost his younger brother in the lake that the house will overlook, provides a place of refuge and contemplation. It is seen as a space comprised of myriad sanctuaries— within the context of this project, ‘sanctuary’ is a place of separation and protection that removes one from the world of the everyday and offers passage to another world. WOJR.ORG

Eggloo is a dessert shop located in New York that specializes in Hong Kong style Waffles and ice cream. Created by a group of second generation Asian Americans. The owners decided to modernize the dessert by putting their own unique spin, by adding ice cream! The waffles come in a wide range of flavors, along with the ice cream. This is a must have delicacy! MYEGGLOO.COM

An internationally recognized Music Producer, Singer, and DJ – Audrey Napoleon is ranked among the top 10 females in the industry. She’s written original music for Heineken’s global campaign titled “#mysunrise” and starred in the advertising campaigns “The Sunrise”/”Dance More Drink Slow”. Audrey has also paired up with Make Up Forever’s President, Gilles Kortzagadardian, to help art direct his own makeup line launched with Sephora. While she may be remixed and supported by various artists for her musical talents, her business mind has helped her stretch her entrepreneurial opportunities. AUDREYNAPOLEON.COM

â&amp;#x20AC;&amp;#x153;I believe that the worse things get the more indispensable Art becomes. In this time and age, it is of most importance to keep creating and inspiring.â&amp;#x20AC;? - Audrey Napoleon

This incredibly soothing rose body scrub is the perfect way to cleanse and relax your body. The scrub is made with Atlantic sea salt and blended with coconut oil, shea, cocoa and kokum butters. This will leave you skin cleansed and hydrated! FRENCHGIRLORGANICS.COM

Angelus U10 Tourbillon Calavera The Angelus U10 Tourbillon, has created an incredible piece that has integrated visual art into a watch. The first piece of the new collection pays tribute to the old Mexican tradition of Calaveras. This exquisite piece of jewelry will be a striking piece on your wrist. ANGELUS-WATCHES.COM

“THIS IS AN ECOSYSTEM, A DREAM WORLD I WANT TO EXPLORE. MYSTERIOUS AND COMPELLING. THE AESTHETICS OF THIS PROJECT SET ITSELF APART.” - AIA NEXTLA JURY

An interest in the formal association of the dome throughout architectural history and its role within the typology of the public bath is inspiration for the design for the LiepÄ ja Thermal Bath. Playing a huge role in the most technologically innovative Roman bathing structures as well as countless Renaissance and Baroque precedents, the dome has been an important device for organization and representation throughout the history of the public bath. The domeâ&amp;#x20AC;&amp;#x2122;s roles in all of these structures are closely aligned by reinforcing centrality and singularity. This form renders, unmistakably, the importance of the circle of the space directly below. The representational efficiency of the dome has made it a favourite for people with an interest in reinforcing the idea of a centralized and singular power system. The design of the LiepÄ ja Thermal Bath seeks to change the conventional symbolic performance of the critical world we live in by challenging its desire to move towards the center as well as its bias towards hierarchy. Maximizing the connection of the intersection of the spherical forms and the unique spaces between them, the project combines a sociopolitical conceptual foundation and an unorthodox spatial experience resulting in something that is both spirited and atmospheric. SSC-A.COM

“We have to understand each other. Diversity is good. We need to stay united. The world is in danger, nature, fresh air, climate changes are very important topics. New technologies are needed to protect our environment. The earth is all we have.” @ASTRIDXVOS

MERCEDES-BENZ STYLE ON LAND, AT SEA + IN THE AIR!

Mercedes has created a new dimension of private air travel, with the creation of their new aircraft. The company has officially expanded into the airline business. The design concept is sleek and modern, having incredible amenities. Mercedes kept their classic design with the black panels and the dashboard design. Each jet is able to be custom designed for the owner as well, and they are taking orders in the upcoming year for this product. TRENDLAND.COM