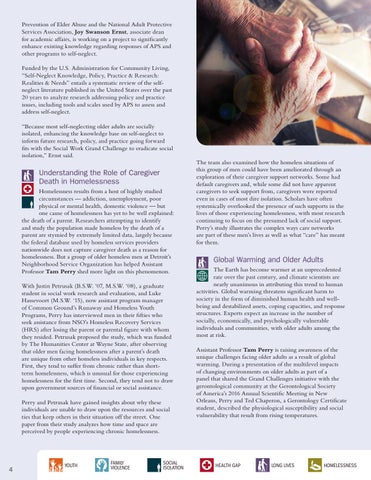 Prevention of Elder Abuse and the National Adult Protective Services Association, Joy Swanson Ernst, associate dean for academic affairs, is working on a project to significantly enhance existing knowledge regarding responses of APS and other programs to self-neglect. Funded by the U.S. Administration for Community Living, “Self-Neglect Knowledge, Policy, Practice &amp; Research: Realities &amp; Needs” entails a systematic review of the selfneglect literature published in the United States over the past 20 years to analyze research addressing policy and practice issues, including tools and scales used by APS to assess and address self-neglect. “Because most self-neglecting older adults are socially isolated, enhancing the knowledge base on self-neglect to inform future research, policy, and practice going forward fits with the Social Work Grand Challenge to eradicate social isolation,” Ernst said.

Understanding the Role of Caregiver Death in Homelessness Homelessness results from a host of highly studied circumstances — addiction, unemployment, poor physical or mental health, domestic violence — but one cause of homelessness has yet to be well explained: the death of a parent. Researchers attempting to identify and study the population made homeless by the death of a parent are stymied by extremely limited data, largely because the federal database used by homeless services providers nationwide does not capture caregiver death as a reason for homelessness. But a group of older homeless men at Detroit’s Neighborhood Service Organization has helped Assistant Professor Tam Perry shed more light on this phenomenon. With Justin Petrusak (B.S.W. ‘07, M.S.W. ‘08), a graduate student in social work research and evaluation, and Luke Hassevoort (M.S.W. ‘15), now assistant program manager of Common Ground’s Runaway and Homeless Youth Programs, Perry has interviewed men in their fifties who seek assistance from NSO’s Homeless Recovery Services (HRS) after losing the parent or parental figure with whom they resided. Petrusak proposed the study, which was funded by The Humanities Center at Wayne State, after observing that older men facing homelessness after a parent’s death are unique from other homeless individuals in key respects. First, they tend to suffer from chronic rather than shortterm homelessness, which is unusual for those experiencing homelessness for the first time. Second, they tend not to draw upon government sources of financial or social assistance. Perry and Petrusak have gained insights about why these individuals are unable to draw upon the resources and social ties that keep others in their situation off the street. One paper from their study analyzes how time and space are perceived by people experiencing chronic homelessness.

The team also examined how the homeless situations of this group of men could have been ameliorated through an exploration of their caregiver support networks. Some had default caregivers and, while some did not have apparent caregivers to seek support from, caregivers were reported even in cases of most dire isolation. Scholars have often systemically overlooked the presence of such supports in the lives of those experiencing homelessness, with most research continuing to focus on the presumed lack of social support. Perry’s study illustrates the complex ways care networks are part of these men’s lives as well as what “care” has meant for them.

Global Warming and Older Adults The Earth has become warmer at an unprecedented rate over the past century, and climate scientists are nearly unanimous in attributing this trend to human activities. Global warming threatens significant harm to society in the form of diminished human health and wellbeing and destabilized assets, coping capacities, and response structures. Experts expect an increase in the number of socially, economically, and psychologically vulnerable individuals and communities, with older adults among the most at risk. Assistant Professor Tam Perry is raising awareness of the unique challenges facing older adults as a result of global warming. During a presentation of the multilevel impacts of changing environments on older adults as part of a panel that shared the Grand Challenges initiative with the gerontological community at the Gerontological Society of America’s 2016 Annual Scientific Meeting in New Orleans, Perry and Ted Chaperon, a Gerontology Certificate student, described the physiological susceptibility and social vulnerability that result from rising temperatures.